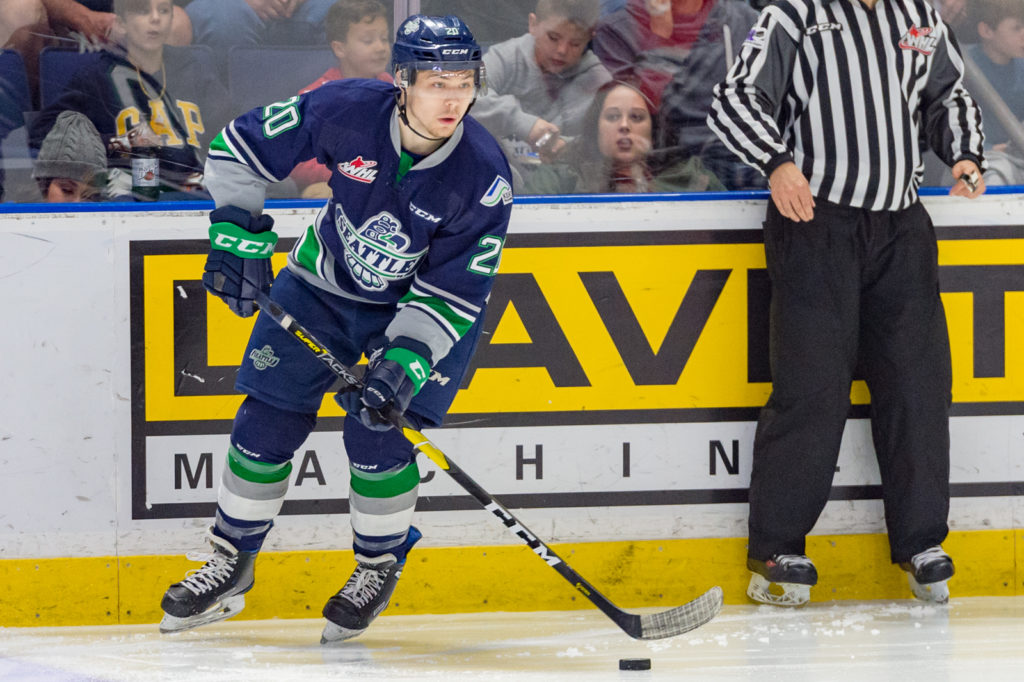 Andrusiak has four goals in 8-6 loss to Portland

KENT, December 29, 2018 — The last game of 2018 for the Seattle Thunderbirds was a wild affair in front of 5,528 boisterous fans at accesso ShoWare Center Saturday night.

The T-Birds and Winterhawks meet on December 31 in Portland at 7pm in their annual New Year’s Eve game.

The Winterhawks made it a 2-0 lead at 5:02 of the first on a goal from Lane Gilliss. Nick Cicek and Robbie Fromm-Delorme had the assists.

Portland extended the lead to 3-0 at 11:37 of the first when Seth Jarvis scored off an assist from Newkirk.

Seattle (11-18-4-0) started the comeback 3:13 into the second period. Tyler Carpendale sent the puck behind the Portland net. Brecon Wood chased the puck down, battled through two Portland defenseman and made a great play from the wall to get the puck to Noah Philp on top of the crease. Philp banged the puck past Portland goalie Shane Farkas for his 11th goal of the season.

Portland defenseman Matthew Quigley was called for a five minute kneeing major on Dillon Hamaliuk 17 seconds after Philp’s goal. The T-Birds took advantage on the power play as Andrusiak beat Farkas with a big slap shot from the left circle for his 22nd goal of the year. Jarret Tyszka and Noah Philp had the assists.

Andrusiak tied the game 3-3 at 10:47 of the second. Tyszka passed the puck up the right wing to Philp who carried it into the zone. Philp dropped the puck to Andrusiak trailing the play. With Jared Davidson crashing the net Andrusiak took a hard wrist shot that beat Farkas over the left shoulder. The net came off its moorings right after the goal and the referees went to video review to confirm it was a good goal. After several minutes the referee pointed to center ice to indicate a good goal.

Portland took the lead back, 4-3, at 13:11 of the second on a power-play goal from Ryan Hughes. Newkirk and Blichfeld had the assists.

A great power move by Payton Mount set the T-Birds up to tie the game 4-4 at 14:55 of the second. Mount came down the right wing, leaned into a Portland defenseman and put a shot off Farkas’ right pad. Volcan crashing the net had the rebound go off his legs and over Farkas for his 14th goal of the season.

The Winterhawks took a 5-4 lead at 17:58 of the second on a power-play goal from Gricius. Blichfeld and Hughes had the assists.

Seattle came back a third time in the second period courtesy of a power-play goal by Andrusiak. Tyszka had the point at the left point and crossed it to Philp at the right point. Philp skated down the right boards and centered to Andrusiak. Andrusiak beat Farkas with a quick snap shot for the hat trick goal at 18:39 of the third.

Portland outshot Seattle 14-12 in the second period and led 24-21 in shots after two periods.

Clay Hanus put Portland in front 6-5 at 1:25 of the third period. Blichfeld and Gricius had the assists.

The Winterhawks extended the lead to 7-5 at 5:24 of the third on a goal by Hughes. Jared Freadrich and Nick Perna had the assists.

Seattle pulled goalie Liam Hughes with 1:28 left for an extra attacker. Andrusiak took a pass from Jaxan Kaluski in the high slot and beat Farkas with a hard wrist shot with 29 seconds left for his fourth goal of the game. Simon Kubicek had the second assist.

Hughes stayed on the bench off the faceoff but Portland was able to get the puck and Gilliss hit the empty net to put Portland back up by two goals.