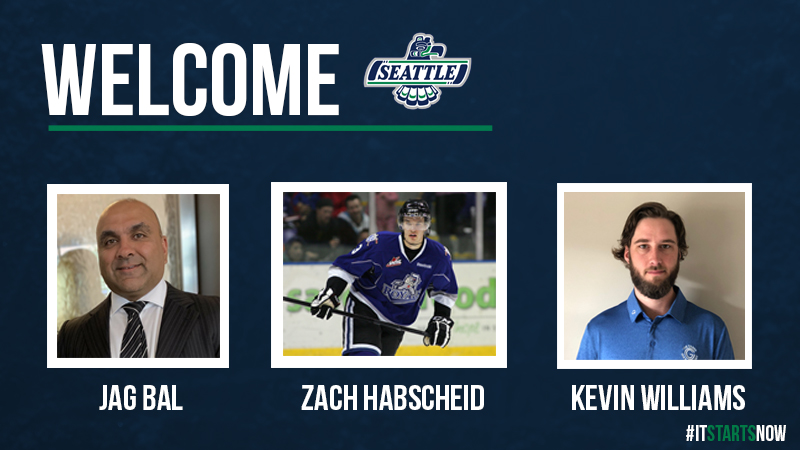 Organization now has 17 scouts on staff

“I think these three are great additions to our staff,” said La Forge. “I am looking forward to working with them this season and beyond.”

“We are really excited to bring Jag on board,” said La Forge. “I have worked with Jag in the past and he’s helped identify and assess many players.”

“I’m really excited about making the move to Seattle,” said Bal. “I learned a lot from Bil in Everett. We have a similar outlook on players and I think I can bring that knowledge and experience to scouting players in British Columbia. I am looking forward to joining a storied franchise that has had a lot of success and I hope to add to the scouting group.”

Habscheid is from Swift Current, Saskatchewan and will scout in his home province.

“We are excited to have Zach on board. He’s a young, enthusiastic guy with a solid hockey pedigree,” said T-Birds director of player personnel Cal Filson.  “Zach is excited to get started on the next stage of his hockey career.”

Habscheid was a defenseman for three seasons in the WHL with the Chilliwack Bruins and Victoria Royals. He appeared in 139 games and had two goals and 11 assists for 13 points with 195 penalty minutes.

“I am grateful for opportunity I’ve been given and excited to be a part of a first class organization like Seattle,” said Habscheid.

Williams is from Chilliwack, British Columbia and has been scouting bantam players for the last five years, the last year and half with Draft Greek, a North American scouting group. Williams will scout for the T-Birds in British Columbia.

“Kevin has some really good experience scouting with Draft Geek and it’s exciting for us to have him to join our team,” said La Forge.

“I’m super passionate about hockey and am really thankful for the opportunity to join a great organization,” said Williams. “I am looking forward to working with a great group and learning a lot from the scouts on staff.”

The T-Birds home opener for the 2019-20 regular season Saturday, September 21, at accesso ShoWare Center at 6:05pm against the Kamloops Blazers.