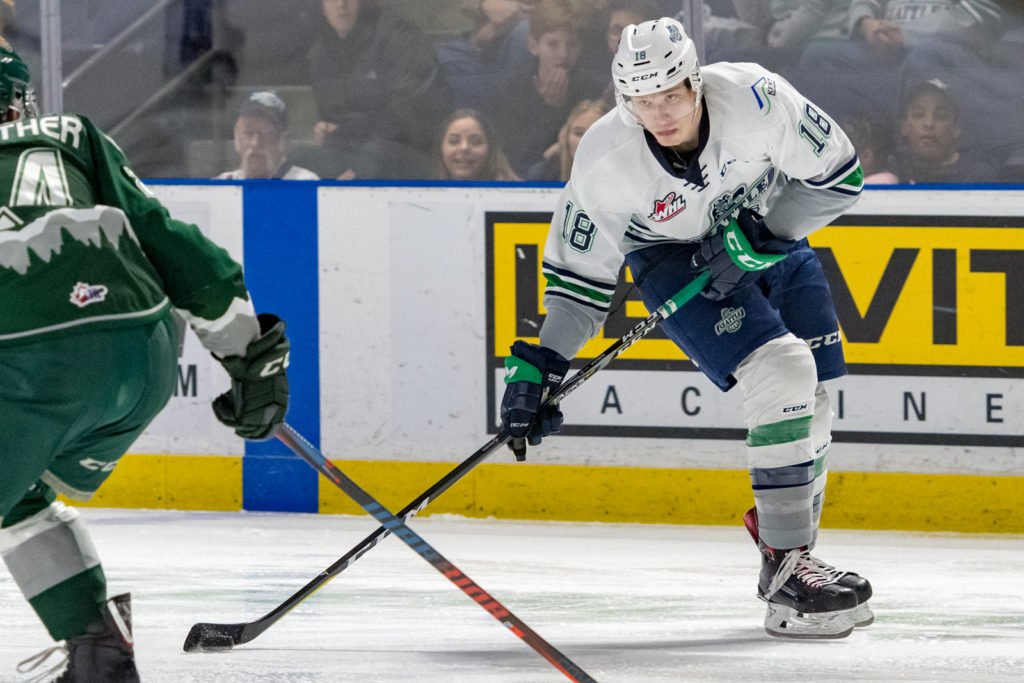 Kukuca and Wedman score in 5-2 loss to Everett

KENT, February 1, 2019 — The Everett Silvertips defeated the Seattle Thunderbirds 5-2 Friday night at accesso ShoWare Center in the first game of a home-and-home series between the two teams.

The T-Birds and Silvertips meet in the second game of a home-and-home series on Saturday at Angel of the Winds Arena at 7:05pm.

Seattle and the Kamloops Blazers are tied for the second wild card playoff spot in the Western Conference.

T-Birds 2108 first round bantam pick Kai Uchacz made his T-Birds debut in the game. Uchacz, from De Winton, Alberta signed a WHL Standard Player Agreement with the team on August 20, 2018. Uchacz played in three preseason games with the T-Birds and had one goal.

Seattle (19-23-5-1) took a 1-0 lead at 14:51 of the first period. Andrej Kukuca’s forecheck down the right boards forced a turnover that Noah Philp was able to corral. Philp skated around the net and found Simon Kubicek at the high point. Kubicek took a slap shot with Kukuca in front of Everett goalie Dustin Wolf that missed the net and rebounded off the end boards. Kukuca spun from in front of the net and swatted the puck past Wolf at the left post as the puck came off the boards.

The Silvertips outshot the T-Birds 17-9 in the second period but the T-Birds had a 23-22 advantage in shots after two periods.

Kindopp scored a power-play goal 26 seconds into the third period to give Everett a 2-1 lead. Zack Andrusiak and Connor Dewar had the assists.

Kindopp scored a five-on-three power-play goal at 6:42 of the third to make it a 3-1 Silvertips lead. Andrusiak and Dewar had the assists.

Seattle cashed in on their own five-on-three power play to cut the Silvertips lead to one goal at 8:11 of the third. Kukuca had the puck at center ice and passed it to Noah Philp to the left of the net. Philp quickly moved the puck through the low slot to Matthew Wedman to the right of the net. Wedman beat a lunging Wolf high for his 23rd goal of the season.

Dawson Butt scored at 14:11 of the third and Zack Andrusiak at 15:23 to get Everett’s final two goals.