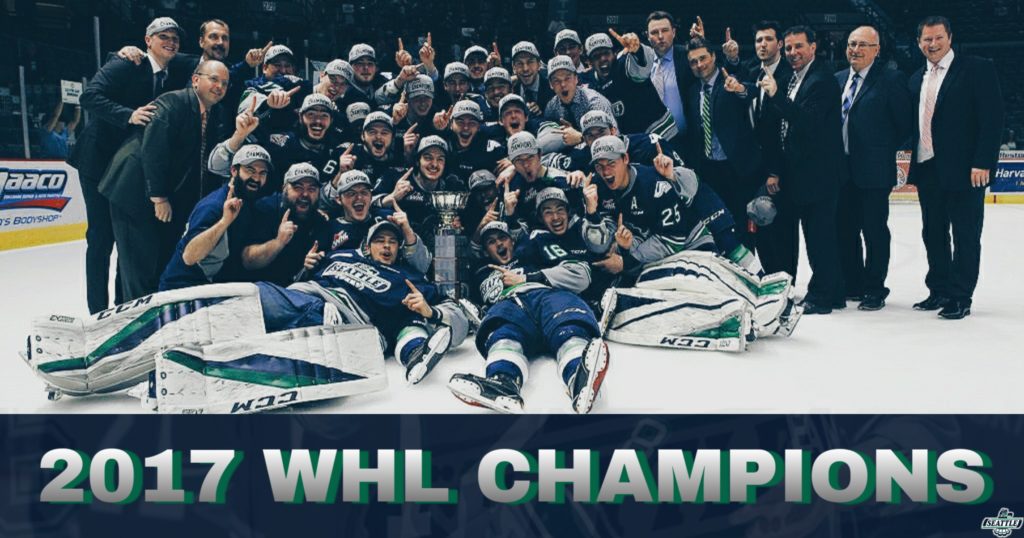 This story on Game 6 was written by Jade Gilson, a junior at Kentlake High School. Jade also produced the graphics you see in the story.

Game 6 of this action-packed series has come to an emotional close as the Seattle Thunderbirds defeated the Regina Pats 4-3 in overtime at their home arena, the Brandt Centre, on May 14th, 2017, to win the WHL Championship and be awarded the Ed Chynoweth Cup.

The Pats were hungry for another home win and came out swinging in the first period. Sam Steel fired a shot past Carl Stankowski at 7:18. Josh Mahura and Connor Hobbs were credited with the assists of Steel’s power-play goal.

Both teams put up a hard fight, but no more goals were scored in the first period. Seattle outshot Regina 10-3.

The Thunderbirds were hungry to score in the second being down 1-0. Sami Moilanen tied it up by scoring a goal after a pass from co-captain Scott Eansor at 8:55.

The Pats, in an effort to regain their lead, outshot the T-Birds 15-14 in the second, but the score still remained tied at 1-1. At the end of the second, Regina had outshot Seattle 15-14.

Darren DuPont on the Shaw broadcast interviewed forward Ryan Gropp during the second period intermission. When DuPont asked how important it was to tie up the game before the break, Gropp responded, “It was huge, obviously it was a big boost for us. It was a great play by Eansor’s line and for them to capitalize was definitely a big lift for us”. Gropp also mentioned that he and his teammates hope to keep up their high energy level going into the third.

Seattle was back on the ice with vengeance for period three to break the tie. However, Regina beat them to it.

Josh Mahura scored the Pats’ second goal of the night, at 11:50 of the third, assisted by Jeff de Wit and Dawson Leedhal.

Soon after, Austin Wagner scored an unassisted goal at 13:12, which made Regina’s lead 3-1.

Despite trailing by two, the Thunderbirds were not ready to give up this battle just yet. After a scrum in front of the net, Ethan Bear passed the puck to Gropp, who then fired it past Regina goalie Tyler Brown and off the crossbar and in, making Regina’s lead too close for comfort at 3-2.

Chase Harrison of the Pats was penalized for holding, which gave Seattle a golden opportunity to tie up Game 6. Gropp passed the puck to Bear near the blue line, who then sent it towards Keegan Kolesar in the left circle. Kolesar then hammered it into the net at 17:06, tying it up 3-3 with a power-play goal.

At the sounding of the third period buzzer, the score remained 3-3. Seattle outshot Regina in the third, 11-9.

In overtime, both teams were determined to win Game 6. The intense and physical game had fans on the edge of their seats, leaving them to wonder who would be victorious. A little over halfway through the period, neither team had scored.

Then, desperately following his own shot, forward Alexander True scored the championship winning goal, assisted by Kolesar and Aaron Hyman at 12:36. The overtime goal made the score 4-3, and gave the Thunderbirds their first WHL Championship in franchise history.

Following this historic moment, DuPont interviewed Thunderbirds head coach Steve Konowalchuk and asked how he felt about this exhilarating win. “It was an unbelievable feeling to see that goal go in. And how hard these guys work, they work so hard. It’s unbelievable,” said Konowalchuk.

The Thunderbirds will soon be playing in the Memorial Cup in Windsor, representing the Western Hockey League in the round-robin tournament.