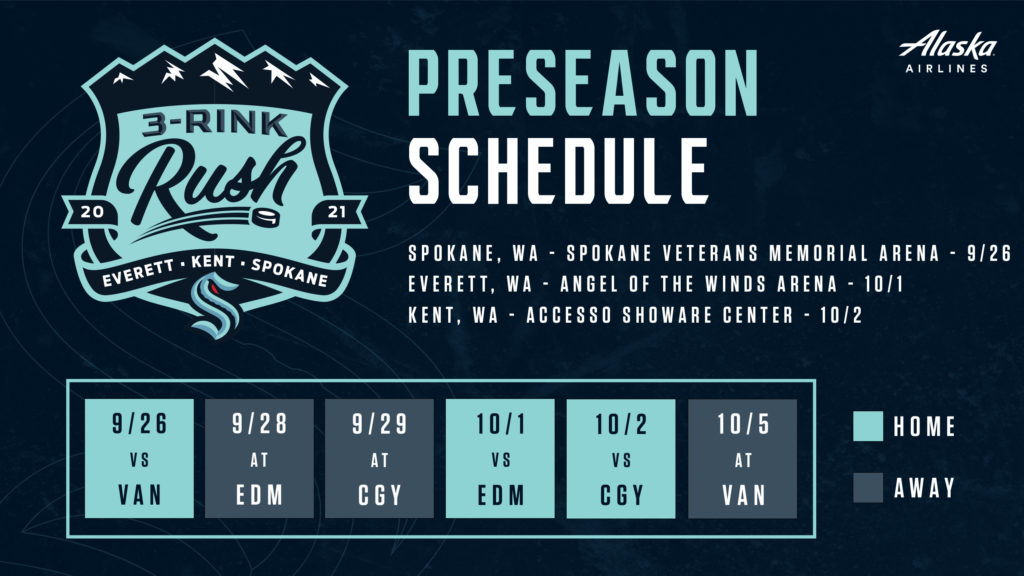 Schedule will feature “home” games in Spokane, Everett and Kent against the Canucks, the Oilers and the Flames

SEATTLE, Wash. July 9, 2021– The Seattle Kraken today announce the preseason schedule for their inaugural NHL season, with the team playing home and away games against the Vancouver Canucks, Edmonton Oilers and Calgary Flames. The games will be played between September 26th and October 5th and the three “home” games will be played at arenas across the state as follows:

“We are so grateful to the men and women who have worked tirelessly to build Climate Pledge Arena in the most extraordinary of circumstances and thank Mortenson and all the sub-contractors,” said Tod

Leiweke, CEO of the Seattle Kraken. “The arena is on track to host our first regular season home game in mid-October, but we have made the decision to play our three inaugural preseason games at three outstanding local arenas. This gives us an opportunity to partner with the WHL teams, celebrate hockey across our region and grow this beautiful game. We couldn’t be more excited for these games and then to open Climate Pledge Arena.”

Tickets for each game will be sold by each individual WHL team. The Seattle Kraken will donate a portion of ticket revenue to One Roof Foundation with a goal of raising over $500,000 to expand youth access to hockey. The Kraken is working with the Thunderbirds, the Silvertips, and the Chiefs, along with the Tri- City Americans and the Portland Winterhawks, to grow the game across the region.

Tickets will go on sale to the general public at 12noon on July 16 via angelofthewindsarena.com for Everett, seattlethunderbirds.com for Kent and ticketswest.com for Spokane.

“These games represent the opportunity to see our roster come together for the first time outside of training camp,” said Seattle Kraken General Manager, Ron Francis. “It will be an honor to play them in hockey communities across the state and I know our players will be excited.”

“We are looking forward to welcome the Seattle Kraken to the accesso ShoWare Center,” said Colin Campbell, president of the Seattle Thunderbirds. “We are already partners with the Kraken and our organizations are committed to developing local hockey players and helping them succeed at the highest levels of the game. This is a unique opportunity for the next generation of Washington hockey talent and being able to host this game in our home arena is an honor. We look forward to giving our Season Ticket Holders the opportunity to see Kraken hockey in the accesso ShoWare Center.”

“It’s an amazing testimony to the growth of hockey in the Pacific Northwest that the Seattle Kraken have quickly unified the passion of our fan base and those of fellow WHL franchises for this incredible opportunity,” said Silvertips and Consolidated Sports Holdings chief operating officer, Zoran Rajcic. “Angel of the Winds Arena in downtown Everett has become synonymous with the energetic and loyal core values of our fans, and the infancy of future NHL and pro talent. From the moment the Kraken approached us with an opportunity to host NHL preseason hockey in our home, we felt it was a perfect match.”

embark on their inaugural season,” said Mark Miles, president of the Spokane Chiefs. “The event will be a great opportunity for fans in Eastern Washington to see the Kraken play while also helping grow the game of hockey in our region. We are also excited about the opportunity to provide our season ticket holders and the Tri-City American season ticket holders an early pre-sale opportunity to purchase tickets. Thank you to the Kraken for their commitment to supporting hockey communities across the entire state.”

The Seattle Kraken’s July 21 Expansion Draft is in 12 days, followed by the NHL Entry Draft on July 23-24. The puck will drop for the team’s inaugural season at Climate Pledge Arena in October.

The complete Seattle Kraken preseason schedule is as follows:

About Seattle Kraken
The Seattle Kraken are the National Hockey League’s newest franchise, set to play their inaugural season in 2021-2022 at Climate Pledge Arena at Seattle Center, developed by Oak View Group. Visit www.nhl.com/kraken for the latest news and information including press releases, multimedia content and the latest hires.

About the Spokane Chiefs
The Spokane Chiefs are member of the U.S. Division of the Western Hockey League. Since 1985 the Chiefs have been a pillar in the Spokane community, offering family-friendly entertainment and a winning tradition which includes: two Memorial Cup Championships in 1991 & 2008, two WHL Championships in 1991 & 2008 and four Western Conference Championships in 1991, 1996, 2000 & 2008. Over 60 alumni have gone on to play in the National Hockey League. The Chiefs’ 2021-22 regular season will begin on Saturday, October 2 as they host the Tri-City Americans at Spokane Arena. For more information, visit spokanechiefs.com.

About the Everett Silvertips
A member of the Western Hockey League since 2003-04, the Everett Silvertips compete on home ice in downtown Everett’s 8,149-seat Angel of the Winds Arena, have helped 20 players advance to play in the National Hockey League, have elevated 27 players to be selected by teams in the NHL Entry Draft, and have sent over 60 players to compete in international competition. Three Silvertips suited up at the 2021 IIHF World Junior Championships, including goaltender Dustin Wolf, who earned a gold medal with the United States. The Silvertips will enter the 2021-22 season as defending U.S. Division champions under head coach Dennis Williams, capturing eight division titles and two Western Conference titles in franchise history. Over the previous three seasons, eight Silvertips have been selected in the NHL Entry Draft and since 2018, a total of 11 Silvertips have signed three-year, NHL entry level or AHL contracts.

About the Seattle Thunderbirds
The Seattle Thunderbirds are a member of the 22-team Western Hockey League (WHL). The 22 member Clubs consist of 17 in Western Canada and five in the U.S. Pacific Northwest. The WHL is regarded as the world’s finest development league for junior hockey players. As a member of the Canadian Hockey League, the WHL has been a leading supplier of talent for the National Hockey League for over 50 years. The Thunderbirds have had 14 players selected in the first round of the NHL Draft and 112 players overall selected in the NHL Draft. The WHL is also the leading provider of hockey scholarships with over 375 graduates each year receiving WHL Scholarships to pursue a post-secondary education of their choice.