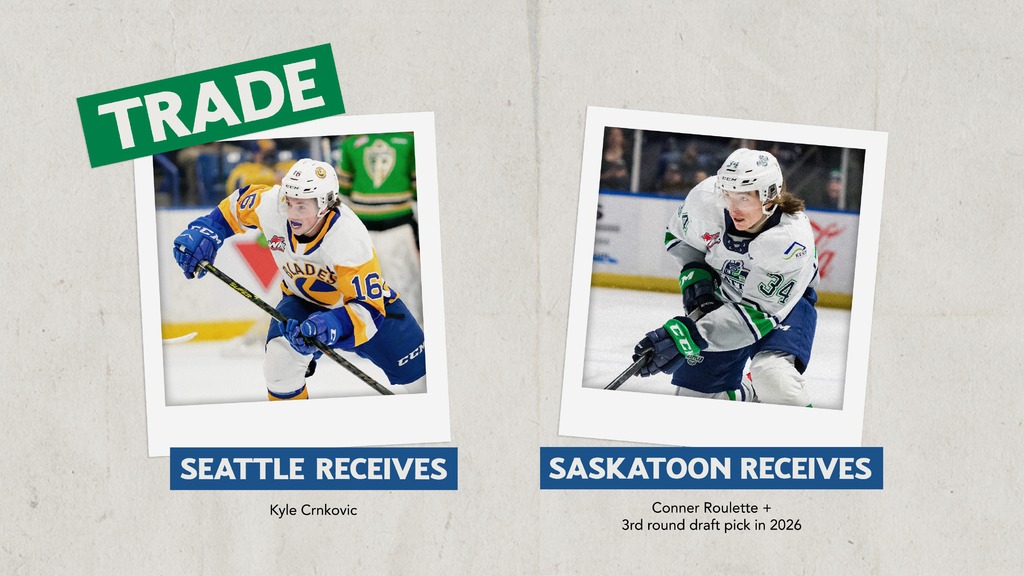 KENT, August 30, 2022 — The Seattle Thunderbirds have announced that the team has acquired left wing Kyle Crnkovic from the Saskatoon Blades in exchange for left wing Conner Roulette and a third-round pick in the 2026 WHL Prospects Draft.

“We’d like to thank Conner for his time with the Seattle Thunderbirds,” said General Manager La Forge. “Anytime you have the opportunity to add a player of Crnkovic’s caliber it ends up costing a guy off the roster. Conner is an excellent player, and we wish him all the best with the Blades.”

Crnkovic was picked by the Saskatoon Blades in the first round of the 2017 WHL Draft. He played 210 total games for the Blades and had 81 goals and 140 assists for a total of 221 points. During the 2021/22 season alone he accounted for 94 total points.

The T-Birds start the 2022-23 Western Hockey League regular season against the Vancouver Giants on Friday, February 23, at 7:30pm at the Langley Events Centre in Langley, BC.

The first home game of the season is on Saturday, October 1 at 6:05pm at the accesso ShoWare Center, located in Kent, WA. Single game tickets are on sale on Wednesday, August 31 at 10:00am online at seattlethunderbirds.com.