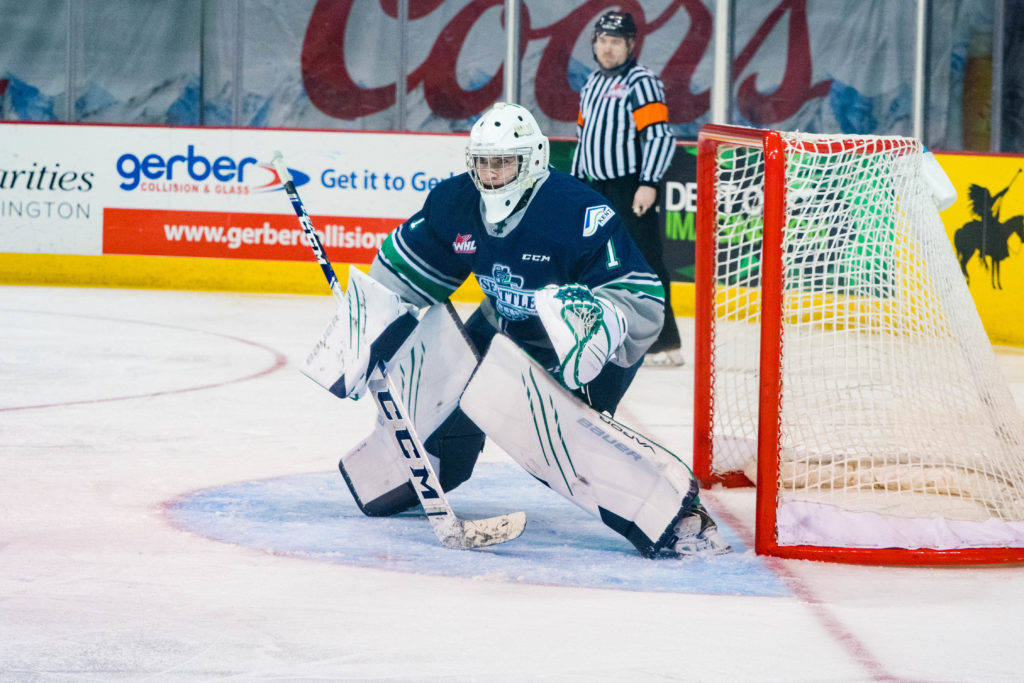 Sunday night’s game vs. Portland will be on JOEtv Channel 22/Cable 110

Goalie Scott Ratzlaff made his T-Birds debut in the game, starting the third period in relief of Jackson Berry. Ratzlaff was the T-Birds second round pick, 43rd overall, in the 2020 WHL Draft and signed a Standard WHL Player Agreement with the team on May 1, 2020. Ratzlaff stopped Eli Zummack on a breakaway 44 seconds into his debut.

The Chiefs extended the lead to 2-0 on a goal by Copeland Fricker at 9:23 of the first.

Seattle cut the lead to one at 10:49 of the first on Jared Davidson’s sixth goal of the season. Payton Mount worked the puck out of the right corner to Jeremy Hanzel at the right point. Hanzel moved along the blue line and put a wrist shot on net. Davidson tipped Hanzel’s shot past Spokane goalie Campbell Arnold.

Jared Davidson gets his sixth of the season with a nice tip.

🍏 Hanzel. Walk the line and put a wrist shot on net.
🍎 Mount. Worked it out of the corner. #LetsGoBirds pic.twitter.com/5Yywd8VkZl

Spokane took a 3-1 lead on a power-play goal from Adam Beckman at 2:28 of the second period.

Davidson set up the T-Birds second goal to cut the Spokane lead to one. Davidson carried the puck into the offensive zone on the right wing and then stopped along the boards in the right circle. Davidson hit Cade McNelly pinching down from the left point with a cross-ice pass. McNelly redirected Davidson’s pass over Arnold’s right shoulder.

Cade McNelly get's his first of the season.

Nice play by Davidson on the pass. Nice job by McNelly on the pinch from the blue line. #LetsGoBirds pic.twitter.com/l0L00W9map

The Chiefs got goals from Blake Swetlikoff, Matt Leduc and a second goal from Beckman to have a 6-2 lead after two periods.

Keltie Jeri-Leon scored his 12th goal of the season to get the T-Birds third goal. Jeri-Leon backhanded the puck past Arnold from on top of the crease at 6:08 of the third period on assists from McNelly and Lucas Ciona.

Keltie backhands it past Arnold from in close!