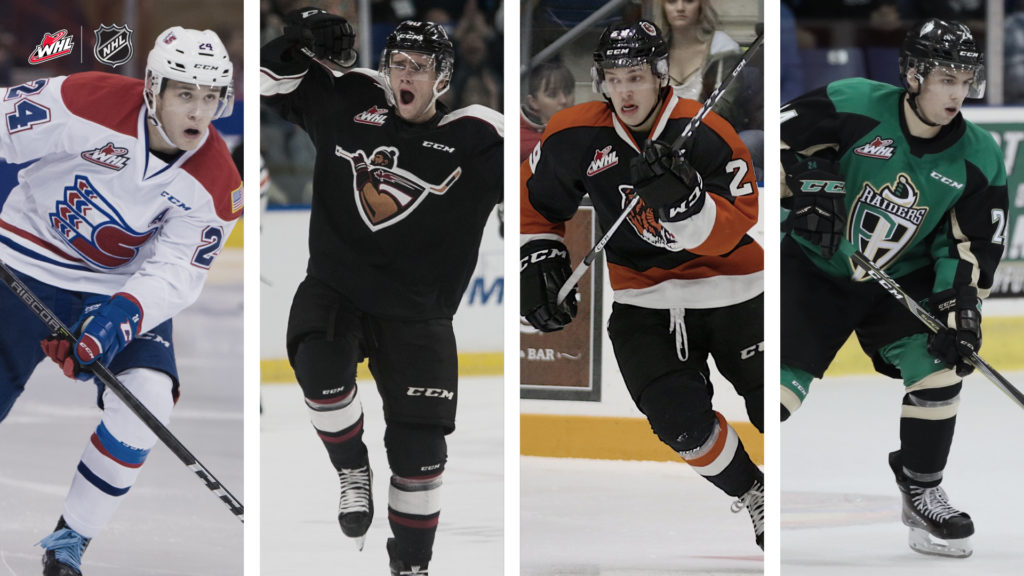 139 players from the Canadian Hockey League, including 38 WHL players, were listed among NHL Central Scouting’s November ‘Players to Watch’ list for the 2018 NHL Draft which takes place June 22-23 in Dallas, TX. The number of WHL players on the list represents a substantial growth for the league, up from the 27 listed in preliminary ‘Players to Watch’ list in October.

Alexeyev and Woo made the jump to the top-tier rankings after being given a ‘B Rating’ in the preliminary rankings. With 17 points (6G-11A) in 18 games, Woo has been a top contributor for the Warriors in their ascension to the top of the Eastern Conference. Alexeyev has 11 points (1G-10A) in 13 games for the Rebels as they battle for positioning in a tight Central Division. Smith retained his ‘A Rating’ from the preliminary list and presently sits second on the Chiefs in scoring with 21 points (3G-18A) in 18 games.

Four players, including two more defencemen earned a ‘B rating’, including Calen Addison (Lethbridge Hurricanes) and Yegor Zamula (Regina Pats). Addison retained his ranking from October while Zamula moved up from a ‘C Rating’. Riley Sutter (Everett Silvertips) retained his rating while Milos Roman (Vancouver Giants) was one of several WHL players moving up the latest list as well.

31 WHL skaters earned a ‘C Rating’ from NHL Central Scouting, including 19 new players. The WHL had five goaltenders ranked on the last ‘Players to Watch’ list, including the duo of Todd Scott and David Tendeck, who both play with the Vancouver Giants.

Overall, the Rebels lead all WHL teams with four players listed while five other teams (Portland Winterhawks, Spokane Chiefs, Swift Current Broncos, Vancouver Giants and Victoria Royals) each have three with 20 of the 22 WHL clubs represented in this most recent list.

89 CHL players, including 33 WHL players, were selected in the 2017 NHL Draft including 14 players chosen in the first round.

Players have been identified using the following criteria: