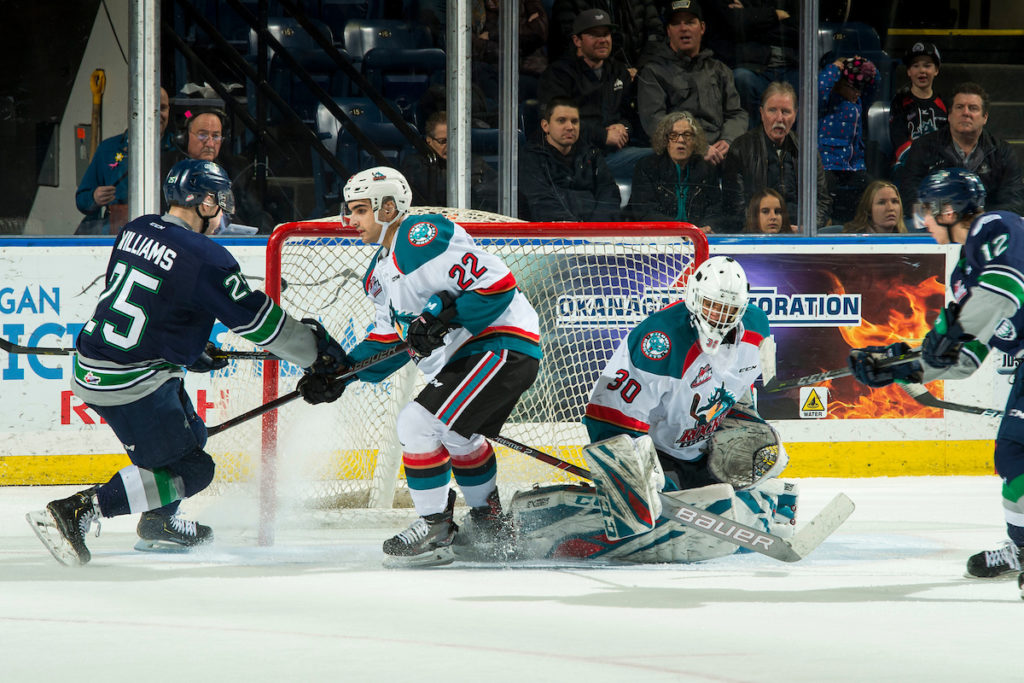 KELOWNA, January 30, 2019 — Henrik Rybinski made his first goal as a Seattle Thunderbird a memorable one Wednesday night at Prospera Place in Kelowna.

Rybinski scored at 2:38 of overtime to give the T-Birds a 3-2 win over the Kelowna Rockets.

Rybinski has a goal and 12 assists in 12 games with the T-Birds since being acquired from the Medicine Hat Tigers on January 4.

The T-Birds have registered a point in nine of their last 10 games and finish January with an 8-3-1-1 record.

Seattle improved to 19-22-5-1 and are two points ahead of the Kamloops Blazers in the second wild card playoff spot in the Western Conference. They are nine points behind the Spokane Chiefs and Tri-City Americans who are tied for third place in the US Division.

Seattle tied the game 1-1 with 54 seconds left in the first. Sean Richards passed the puck to Matthew Wedman who skated up the left wing. Wedman crossed the blue and cut to the high slot. Wedman put a wrist shot on goal through traffic and beat Basran on the glove side.

The T-Birds outshot the Rockets 12-8 in the first period.

Kelowna took a 2-1 lead at 15:02 of the second period on an unassisted shorthanded goal from Kyle Crosbie.

Tyrel Bauer tied the game 2-2 with 45 seconds left in the second period. Philp won a faceoff in the left corner of the Rockets zone to Andrej Kukuca on the right wing. Kukuca poked puck back to Bauer at the left point. Bauer took a slap shot with traffic in front of Basran and beat the goalie on the glove side.

Both teams had 11 shots in the second period and Seattle led 23-18 in shots after two periods.

The T-Birds killed off 1:33 of a five-on-three Rockets power play with six minutes left in the third period.