Royals Slip Past T-Birds in Overtime 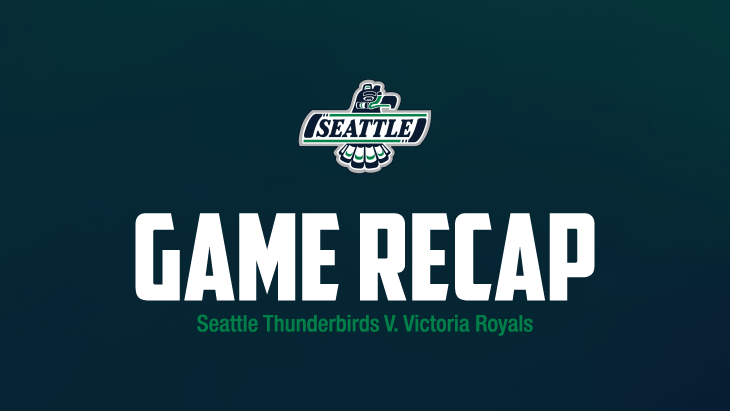 Kent, WA. – Jared Davidson’s goal and two assists were not enough as the Seattle Thunderbirds fell in overtime to the Victoria Royals Friday, 5-4 at the accesso ShoWare Center. The loss snapped a two-game winning streak for the T-birds. The Thunderbirds weekend continues as they take to the road Saturday. They head to Spokane to battle the Chiefs at 7:05 p.m.

Seattle dominated the first period, outshooting the Royals 15-6. They grabbed the first of their three leads on the night when Davidson scored his eighth of the season, and third in as many games, with just over two minutes remaining. Sam Popowich and Reid Schaefer had the assists.

Head Coach Matt O’Dette liked his team’s start but said they needed a more complete effort. “I thought the first was pretty good minus a few puck management issues. Things started to unravel a bit in the second and third.” O’Dette added they needed to stick to the game plan. “There was some frustration with the officiating, some of the penalties called, icings not called. I think we lost a little bit of our composure there. We didn’t stay on our path.”

The T-Birds extended their lead to two goals when Sawyer Mynio snapped home his second of the season two and a half minutes into the second period. Davidson had one assist while Mekai Sanders had the other. Victoria was able to cut the Seattle lead in half when Carter Briltz swept in a rebound at 3:55.

The game changed when Seattle’s Matt Rempe was assessed a five minute, checking-to-the-head, major penalty, and the automatic game misconduct that goes with it, at the 11-minute mark. The T-Birds, who started the game with only eleven forwards, would have to play the second half of the game with just ten.

The Royals tied the game 30-seconds into the power play on a Bailey Peach goal. But Seattle was able to kill off the rest of the major penalty, and within moments of killing off the penalty, found the go-ahead goal. Jordan Gustafson fed a pass to Alessandro Segafredo at the Royals blueline. Segafredo got the puck back to Gustafson inside the Royals zone. Gustafson then fed it to newcomer Sam Knazko, who scored his first as a Thunderbird, giving Seattle a 3-2 lead.

The Royals found the answer with just 34-seconds remaining in the period on a play Seattle believed should have been ruled an icing. Instead, Keanu Derungs scored to send the game to the third period tied at 3-3.

The T-Birds regained the lead midway through the third period on a strong rush down the left wing by Eric Van Impe, who took the puck to the next and jammed home his first of the season. The lead lasted all of 53-seconds before a Seattle defensive zone turnover led to Evan Patrician tying back up at 4-4 at 11:04. At 3:04 of the overtime period Gannon Laroque won it for the Royals with his third goal of the season.

O’Dette said it is all part of the learning process for his, still young, team. “We didn’t duplicate what we did in the first period. We didn’t match that in the second and third. This is the WHL, there are no easy nights. No teams lie down, and they didn’t,” adding, “Ultimately we didn’t play well enough.”

Seattle’s next home game is Tuesday at the accesso ShoWare Center. It’s a Chick-Fil-A Two-for-Tuesday as they welcome the Kelowna Rockets to town. Game time is 7:05 p.m. Tickets are available at seattlethunderbirds.com.

Seattle has now played six straight games without Henrik Rybinski who is listed as day-to-day with an upper body injury.

Knazko, who joined the T-Birds from his former team in Finland earlier in the week, was playing in his first game in over a month. O’Dette said it will take him a few games to get up to speed. “He had COVID. It’s going to take some time for his cardio and his stamina to come back. He’s only going to get better. I thought he played well tonight and we’re going to see him get better and better as he gets back, feeling himself.”

After a nearly two-year absence, Seattle has now hosted four of the five B.C. Divisions teams at least once. Only the Vancouver Giants have yet to make a trip into Kent this season. They won’t be at the accesso ShoWare Center until February 5th. 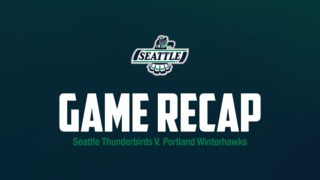