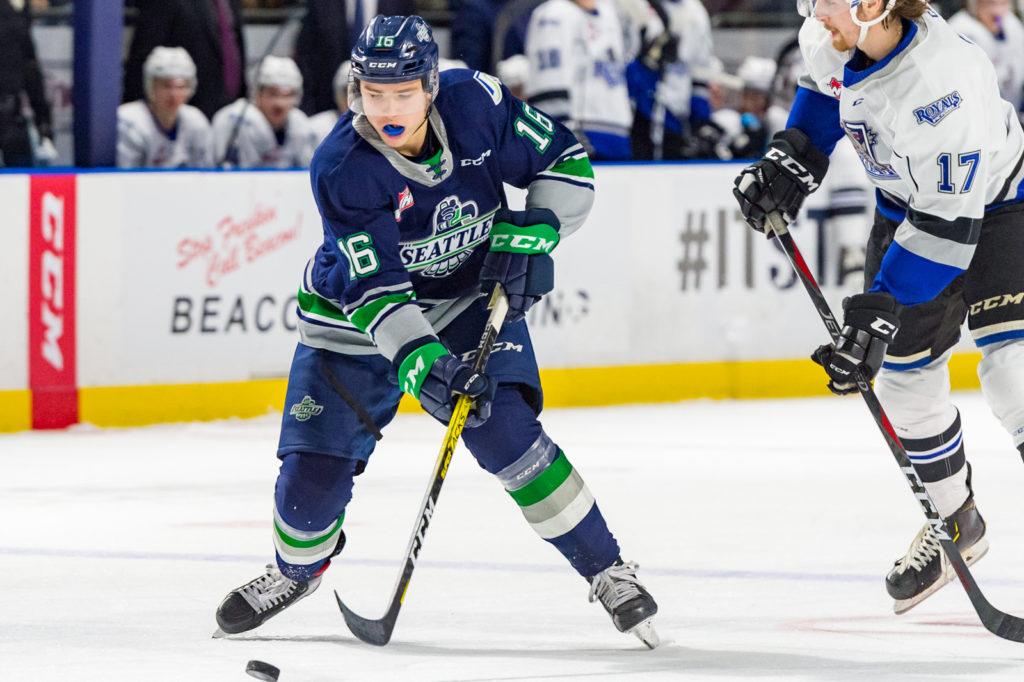 Rempe and Uchacz score in 4-2 loss to Victoria

KENT, November 27, 2019 — The Victoria Royals defeated the Seattle Thunderbirds 4-2 Wednesday night in front of a sellout crowd of 6,038 at accesso ShoWare Center.

This was the second consecutive sellout for the T-Birds. There were 6,143 fans at accesso ShoWare Center on Saturday for the T-Birds 3-2 win over the Saskatoon Blades.

The T-Birds next game is Saturday at Angel of the Winds Arena against the Everett Silvertips at 7:05pm.

The T-Birds next home game is Tuesday, December 10 at 7:05pm. This game is a Chick-fil-A 2-for-Tuesday game. All tickets, soda, popcorn, hot dogs and beer have special two-for-one prices. Single game tickets are on sale online on the T-Birds website and at the accesso ShoWare Center box office.

Seattle took a 1-0 lead 1:24 into the game on Matthew Rempe’s second goal of the season. Andrej Kukuca stole the puck behind the Victoria net and brought it out front and got a shot off. Victoria goalie Shane Farkas made the save but puck pinballed around in the crease. Rempe was on his knees just outside the crease and banged the loose puck into the net.

Gary Haden gave Victoria a 2-1 lead with a goal at 8:37 of the second period.

Kai Uchacz tied the game 2-2 at 10:40 of the second. Cade McNelly skated the puck to left point and shot it down the wall. The puck deflected off a stanchion right to Kai Uchacz in front of Farkas. Uchacz made a move and beat Farkas on the glove side. Simon Kubicek had the second assist.

Seattle pulled goalie Roddy Ross for an extra attacker with 1:48 left in the game. Victoria’s Tarun Fizer hit the empty net with 1:33 left in the game to get their fourth goal.

The T-Birds pulled Ross a second time and battled in the Victoria zone but were not able to get a third goal.