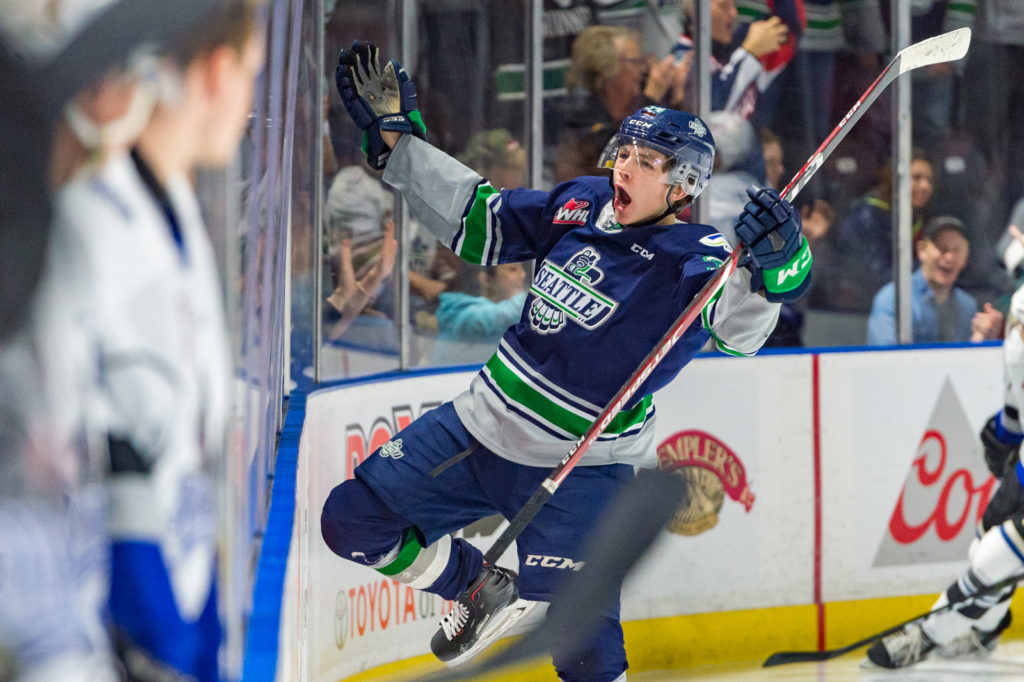 Conner Roulette has hat trick in 5-3 win over Victoria

KENT, October 5, 2019 — Conner Roulette had his first career hat trick Saturday night at accesso ShoWare Center to lead the Seattle Thunderbirds to a 5-3 win over the Victoria Royals.

Roulette’s third goal clinched the win for the T-Birds and came in unusual fashion. Victoria goalie Brock Gould was on the bench for an extra attacker and Roulette got to a loose puck in the neutral zone and headed up ice on a breakaway. Roulette was pulled down from behind on the breakaway with the net empty and the referees awarded him the goal.

Payton Mount had three assists in the game and was driving the play all game.

Seattle went in front 1-0 3:58 into the first period. Mount stickhandled the puck from the T-Birds blue line to the offensive blue line. Simon Kubicek got the puck as it crossed the blue line and skated into the left circle and took a shot. Roulette cleaned up rebound from Kubicek’s shot and slammed it past Gould.

Andrej Kukuca gave the T-Birds a 2-0 lead at 19:26 of the first with a four-on-three power-play goal. With four forwards on the ice for the power play Mount took a shot from the left faceoff dot. Henrik Rybinski backhanded the rebound from the shot to Kukuca in the high slot. Kukuca beat Gould on the stick side with a slap shot for his third goal of the season.

Victoria cut the T-Birds lead to one at 14:10 of the second period on a goal by Tarun Fizer.

Keltie Jeri-Leon got the two-goal lead back with a buzzer beater power-play goal at the end of the second period. Brendan Williamson took a shot from the left circle that deflected to Jeri-Leon in the right circle. Jeri-Leon quickly shot and it hit the back of the net as the buzzer sounded.

The referees went to video review and confirmed the puck crossed the goal line before the horn.

Mount had the second assist on Jeri-Leon’s goal for his third point of the game.

The assist for Williamson was his first point as a T-Bird.

Roulette scored his second goal of the game on the power play 1:45 into the third period. Kukuca sent the puck from the high slot to Matthew Wedman to the right of the net. Wedman quickly crossed the puck through the slot to Roulette in the left circle. Roulette snapped the puck past Gould as the goalie dove to get over and try and make a save.

Jacob Herauf scored on the power play at 16:22 of the third to cut the T-Birds lead to two goals.

Victoria pulled Gould with 2:55 left in the game and capitalized with a goal by Gary Haden at 18:16 to cut the T-Birds lead to one.