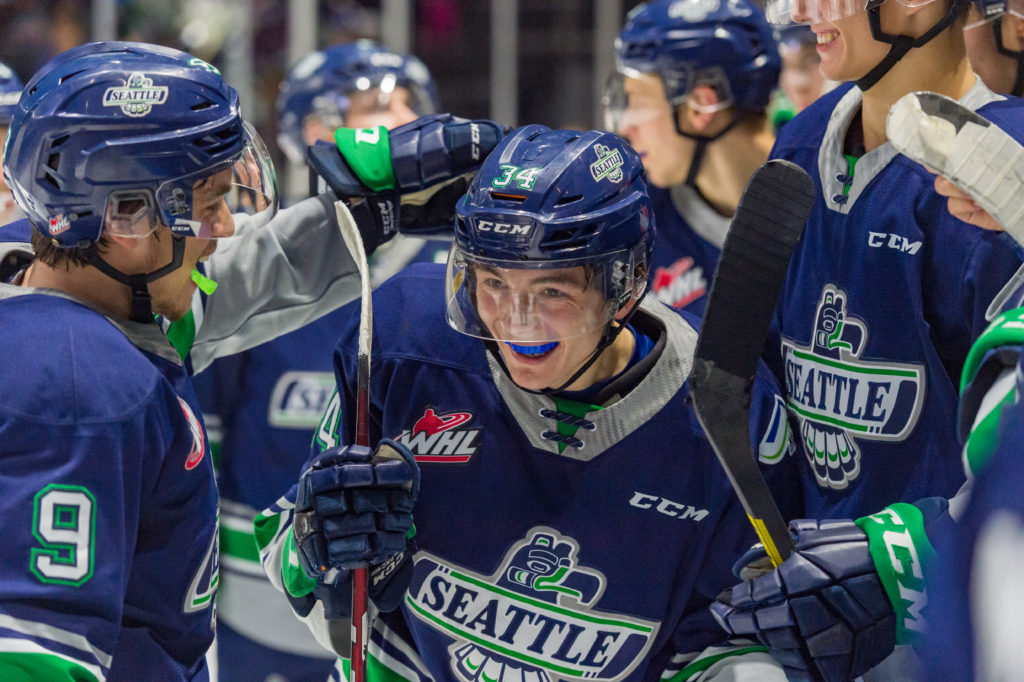 PORTLAND, December 15, 2019 — Conner Roulette had two goals in regulation and scored the shootout winning  goal Sunday night at the Moda Center to lead the Seattle Thunderbirds to a 4-3 shootout win over the Portland Winterhawks.

Roulette was the third T-Birds shooter following Payton Mount and Andrej Kukuca, who were both stopped by Portland goalie Isaiah DiLaura. Roulette skated wide left then coming back right stopped in the crease, went backhand then forehand and beat the goalie over the blocker to win the game.

The T-Birds next game is Tuesday against the Tri-City Americans at 7:05pm in Kennewick. After this game the team will take a nine-day break for the holidays and return to action on Friday, December 27, against the Spokane Chiefs at 7:35pm at accesso ShoWare Center. Single game tickets are on sale online on the T-Birds website and at the accesso ShoWare Center box office.

Not only did Roulette score the shootout winning goal he also tied the game 3-3 with 45 seconds left in the game and Ross on the bench for an extra attacker. Andrej Kukuca went hard to the net with the puck and caused a scramble in front of DiLaura. Matthew Rempe got a stick on the puck before Roulette, to the right of the crease, got the puck into the net through a maze of bodies.

Seattle took a 1-0 lead on a breakaway goal by Roulette at 6:34 of the first period. Ryan Gottfried passed the puck from the right wing boards in the defensive zone up the ice to a breaking Roulette. Roulette stickhandled in on DiLaura and snapped a quick shot over the goalie’s blocker.

Portland tied the game 1-1 at 3:27 of the second period on a goal from James Stefan.

The Winterhawks went in front 2-1 on a power-play goal by Seth Jarvis at 7:18 of the second.

Rempe tied the game 2-2 at 8:43 of the second. Kukuca took a shot from the right circle with Rempe charging the net. Kukuca’s shot rebounded off DiLaura right to Rempe who brough the puck to his backhand and lifted it past the goalie. Rempe has a four-game point streak with two goals and four assists.

Portland took a 3-2 lead at 3:41 of the third period on a goal from Jake Gricius.