Roulette and Milic Selected For Hockey Canada U18 Team 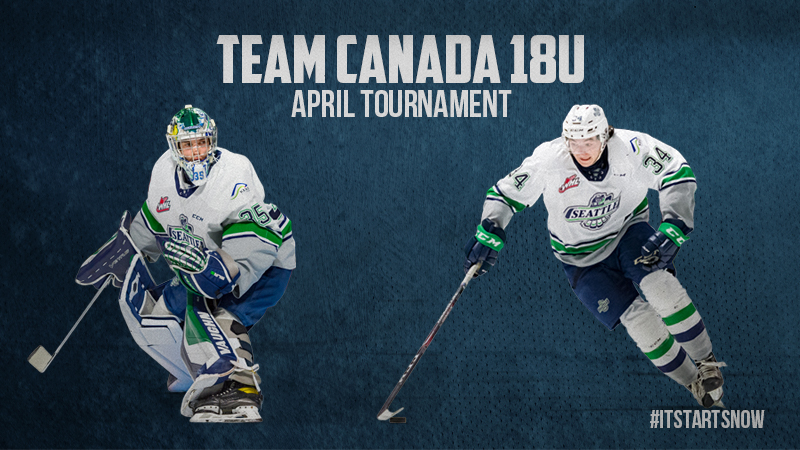 KENT, April 1, 2021 — Seattle Thunderbirds general manager Bil La Forge today announced left wing Conner Roulette and goalie Thomas Milic have been selected by Hockey Canada for the Team Canada Under-18 team that will participate in the 2021 IIHF U18 World Championship.

The 2021 IIHF U18 World Championship takes place from April 26 to May 6 in Frisco and Plano, Texas. Roulette and Milic will leave the T-Birds on April 11 to start a quarantine process before joining Team Canada. They will not return to the T-Birds this season.

This season Roulette has four goals and two assists for six points in six games. Roulette is an ‘A’ rated skater by NHL Central Scouting for the 2021 NHL Draft.

Roulette was third on the team in scoring in his rookie season with the T-Birds in 2019-20. He had 19 goals and 20 assists for 39 points in 54 games. In November of 2019 Roulette represented Canada as a member of Team Canada Red at the 2019 World Under-17 Hockey Challenge in Medicine Hat and Swift Current. Roulette had two goals in four games for Team Red, which finished in fifth place at the tournament.

Roulette was selected by the T-Birds in the second round, 34th overall, in the 2018 WHL Draft. Roulette signed a WHL Standard Player Agreement with the team on June 5, 2018.

Milic played for Team Canada at the 2019 World Under-17 Hockey Challenge as a member of Team Canada Red. Milic finished the tournament with a 2-1-0 record and tournament leading .925 save percentage. Milic was second in goals against average with a mark of 2.53, just .01 behind first place Team Red teammate Jacob Goobie.

Milic was selected by the T-Birds in the third round, 51st overall, in the 2018 WHL Draft. Milic signed a WHL Standard Player Agreement with the team on August 28, 2018.

Prior to travelling to Frisco on April 17, Team Canada players and staff will self-isolate at home starting April 12 and will be tested for COVID-19 three times. Upon arrival in Texas, all team personnel will enter a four-day quarantine at the hotel before starting a pre-tournament camp on April 21.

Canada will open the 2021 IIHF U18 World Championship against Sweden on April 26 at 9 p.m. ET/6 p.m. PT, and will also take on Latvia, Switzerland, and Belarus in preliminary-round action.