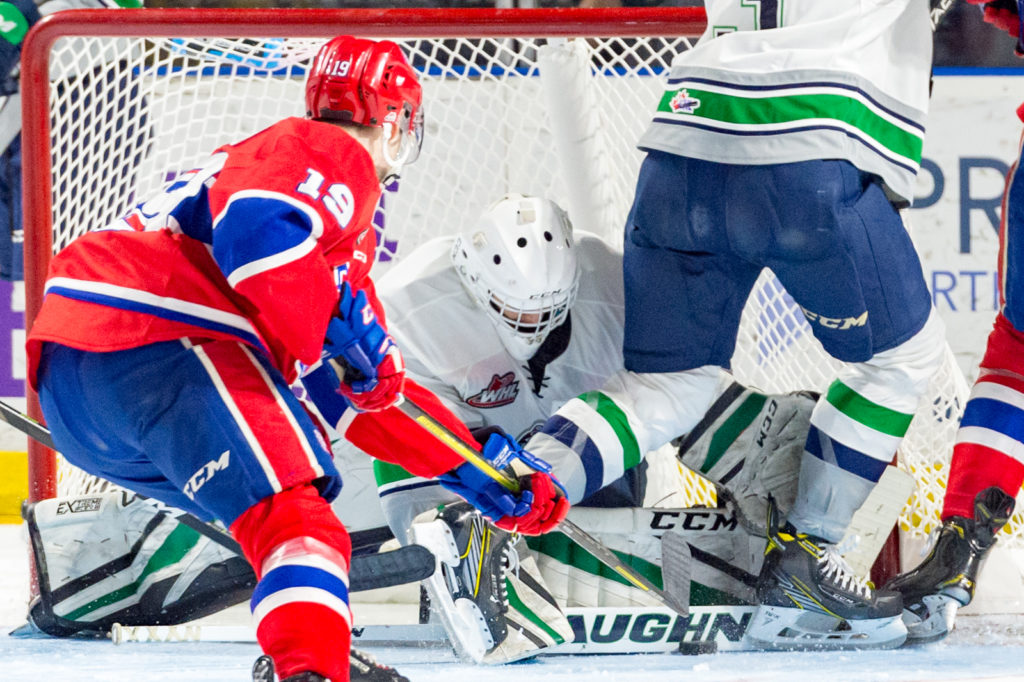 The T-Birds led 2-1 going into the third period. Ross stopped the Chiefs Jaret Anderson-Dolan on a two-on-one with a break with a blocker save with six minutes left. With three minutes left Ross made a quick right pad save on an Anderson-Dolan chance from the slot.

Spokane pulled goalie Bailey Brkin with 56 seconds left in the game for an extra attacker. The remainder of the game was played in the T-Birds ends and Ross made a scramble save covering the puck with his glove with five seconds left.

Ross (4-0-0-1) signed with the T-Birds on January 1 and his previous four games were all played on the road.

Seattle (17-21-4-1) jumped out to a 1-0 lead 4:07 into the first period. Keltie Jeri-Leon controlled the puck in the neutral zone and then sprung Nolan Volcan on a two-on-one break with Matthew Wedman. Volcan came down the right wing and then feathered the puck over a Spokane defenseman’s stick to Wedman in the left circle. Wedman beat Spokane goalie Bailey Brkin over the blocker short side with a hard wrist shot.

Both teams had 14 shots on goal in the first period.

Volcan came out strong in the second period and scored 24 seconds in to give the T-Birds a 2-1 lead. Volcan blocked a Spokane clearing attempt just inside the blue line. The puck came to Wedman at the top of the right circle and he backhanded it to Volcan coming into the high slot from the right. Volcan skated to the edge of the left circle and beat Brkin with a hard wrist shot over the glove for his 18th goal of the season.

The T-Birds outshot the Chiefs 12-9 in the second period and led 26-23 in shots after two periods.

Brkin finished with 32 saves on 34 shots.