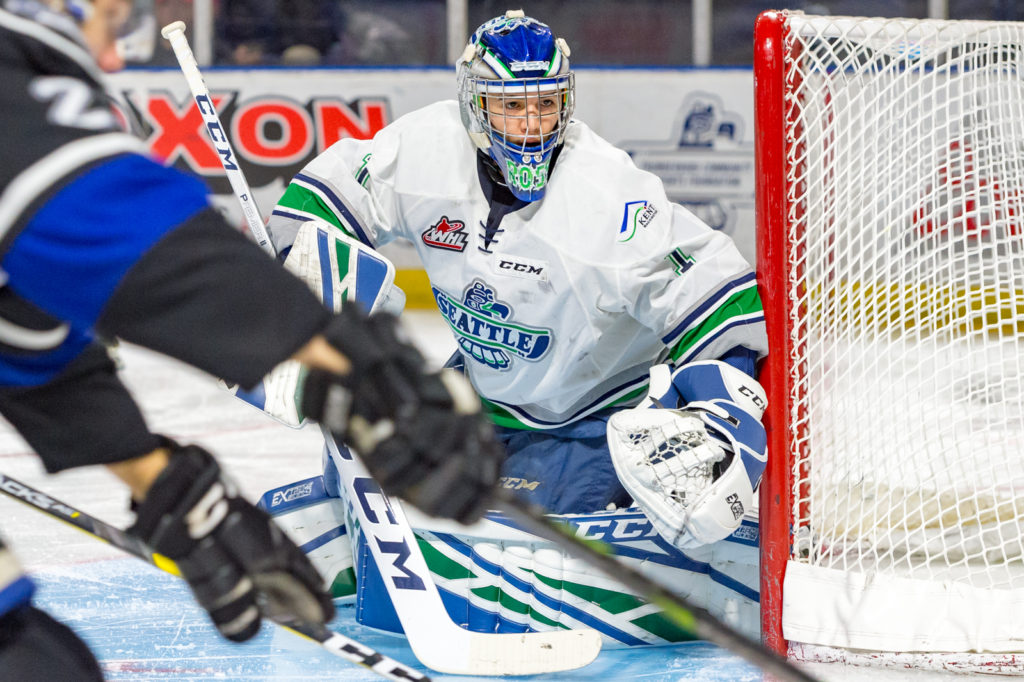 Philp has two goals in 2-1 win over Victoria

KENT, March 8, 2019 — Roddy Ross had 19 saves Friday night at accesso ShoWare Center to lead the Seattle Thunderbirds to a 2-1 victory over the Victoria Royals.

Ross’s biggest save came with 1:37 left in the game. Victoria, with their goalie on the bench, threw the puck at the net from the right corner on a sharp angle. The puck hit Ross and went behind him and was free in the crease. Ross leaned backwards, as all the players on the ice were on top of the crease and covered the puck.

The T-Birds play the Everett Silvertips Saturday at accesso ShoWare Center at 6:05pm. The Blazers are at the Kelowna Rockets Saturday. If the T-Birds win the Blazers lose on Saturday the T-Birds will clinch the second wild card playoff spot.

Seattle took a 1-0 lead on a power-play goal by Noah Philp at 4:40 of the first period. Philp had the puck at the top of the right circle and fed it low to Matthew Wedman. Wedman backhanded the puck to Henrik Rybinski in the slot. Rybinski took a shot and hit the left post. The puck rebounded back into the slot and Philp snapped it past Victoria goalie Brock Gould for his 23rd goal of the season.

Philp made it 2-0 T-Birds at 17:47 of the second period. Payton Mount sprung Philp for a one-on-one break against a Victoria defenseman. Philp came down the left wing, made a move cutting to the slot and beat Gould with a wrist shot over the glove. Tyler Carpendale had the second assist.

Victoria cut the T-Birds lead to one with a power-play goal at 19:59 of the second by Igor Martynov. Mitchell Prowse and Phillip Schultz had the assists.

Victoria pulled Gould with 2:14 left in the game for an extra attacker. After the sprawling save by Ross the T-Birds iced the puck on the next shift. They called their timeout to regroup after the icing. The T-Birds were called for hooking with 15 seconds left to go down two men. Seattle was able to keep Victoria at bay for the last 15 seconds and win the game.