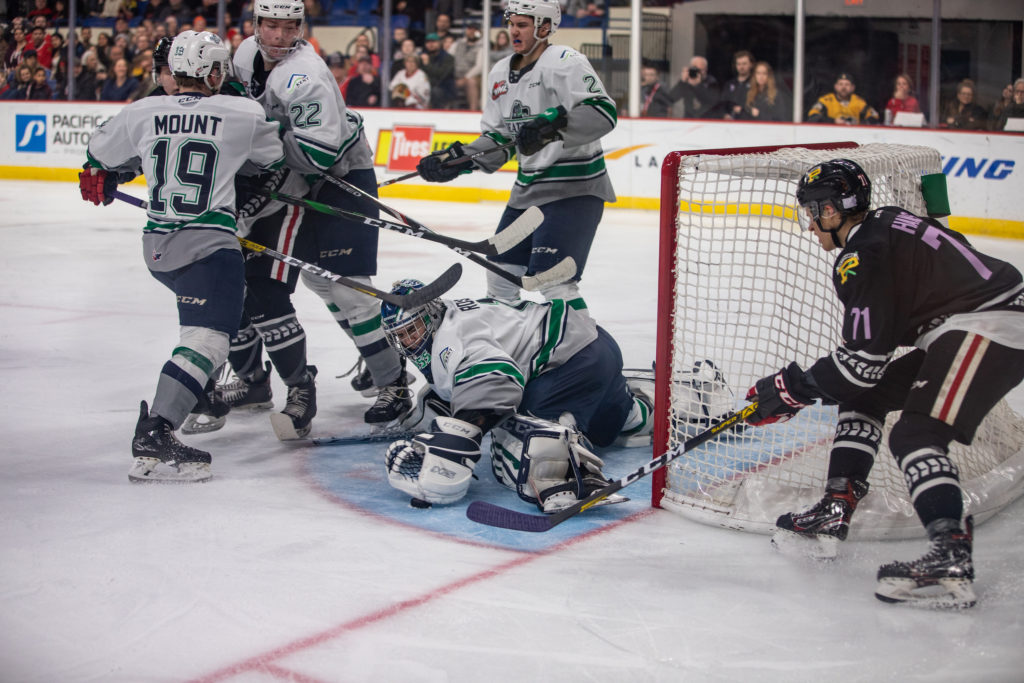 PORTLAND, February 1, 2020 — Seattle Thunderbirds goalie Roddy Ross made 43 saves and stopped three of four Portland Winterhawks in the shootout Saturday night at Veterans Memorial Coliseum to lead the T-Birds to a 4-3 shootout win.

The T-Birds travel to Prince George for back-to-back games against the Cougars on Tuesday and Wednesday. Both games start at 7pm. This will be the first time this season the T-Birds and Cougars meet. They are 10 points ahead of the Cougars in the Wild Card playoff standings having played one more game.

Ross stopped Portland’s first shooter in the shootout, Cross Hanas. Matthew Rempe was first up for the T-Birds in the shootout and beat Portland goalie Joel Hofer with a backhand shot over the blocker.

Ross stopped Seth Jarvis and then Hofer made the save on Conner Roulette.

Jaydon Dureau beat Ross in close to tie the shootout 1-1. Andrej Kukuca came off the bench with the chance to win the game but Hofer made the save.

Ross stopped Portland’s fourth shooter Reece Newkirk. Seattle sent out Simon Kubicek as their fourth shooter. Kubicek skated in on Hofer and beat the goalie through the legs for the winning goal.

Seattle tied the game 1-1 at 15:13 of the first on Jared Davidson’s sixth goal of the season. Max Patterson forced a turnover in the right corner with his long reach. Patterson got the loose puck and fired it to Davidson all alone in the slot. Davidson wired the past Hofer’s blocker.

Hanas scored 24 seconds into the second to give Portland a 2-1 lead.

Kukuca came right back and tied the game 2-2 2 19 seconds after Portland’s second goal. Cade McNelly crossed the puck from the left side to Kubicek on the right side of the defensive zone. Kubicek then passed the puck up the ice to Kukuca to put him on a partial break. Kukuca beat Hofer through the legs for his 17th goal of the season.

Cade McNelly helped set up the T-Birds third goal, at 12:12 of the second. McNelly led a four-on-two break and as he crossed the blue line passed the puck to Lucas Ciona on his right. Ciona crossed the puck to Kukuca in the left circle and McNelly drove the then. Kukuca took a wrist shot with McNelly screening Hofer and beat the goalie on the glove side for his second goal of the game.