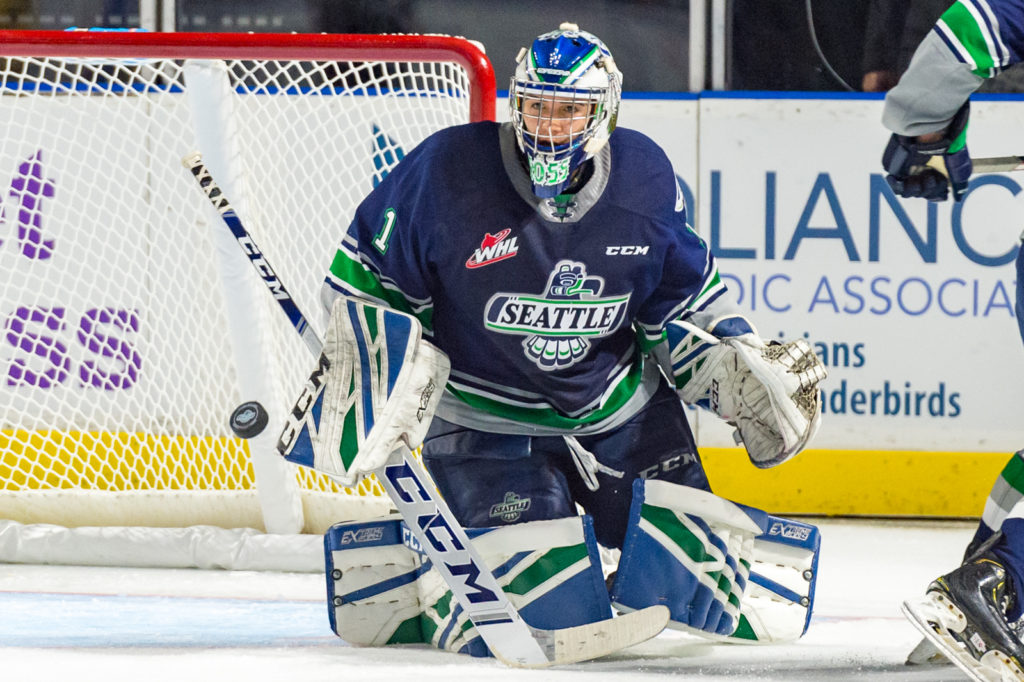 KENT, September 21, 2019 — Goalie Roddy Ross made 50 saves Saturday night at accesso ShoWare Center in the Seattle Thunderbirds Home Opener to lead his team to a 4-1 win over the Kamloops Blazers.

The T-Birds next game is Friday, September 27, against the Tri-City Americans at 7:35pm at accesso ShoWare Center.

Seattle went in front 1-0 at 10:15 of the first period. Michael Horon carried the puck up ice into the offensive zone on the right wing. Horon had the puck poked away but Jared Davidson got it in the right circle. Davidson beat Kamloops goalie Dylan Garand on the glove side with a hard wrist shot. Simon Kubicek had the second assist.

Owen Williams set up the T-Birds second goal at 13:35 of the first. Williams kept the puck in the zone by racing to the left wall at the blue line and chipping the puck down the boards. Henrik Rybinksi controlled the puck and came off the wall into left circle. Rybinski found Andrej Kukuca at the left goal line. Kukuca skated at Garand and beat the goalie short side high for the goal.

The T-Birds made it a 3-0 lead at 18:15 of the first period. Kukuca took a wrist shot from the right circle that rebounded into the slot. Alex Morozoff put the rebound past Garand as he sprawled to make the save. Hunter Donohoe had the second assist.

In the middle of the second period Ross made a highlight reel save on Mats Lindgren just after a Kamloops power play ended. Ross went right to left and stopped Lindgren with a big glove save that brought the crowd to its feet.

Kamloops got on the board 10 seconds into the third period on a four-on-three power play goal by Zane Franklin.

Payton Mount scored at 17:35 of third period to give the T-Birds a 4-1 lead. Mount took a pass from Horon and broke up ice on a two-on-one break. Mount beat Garand over the glove from the middle of the right circle. Kubicek had the second assist.

Garand finished with 30 saves on 34 shots.