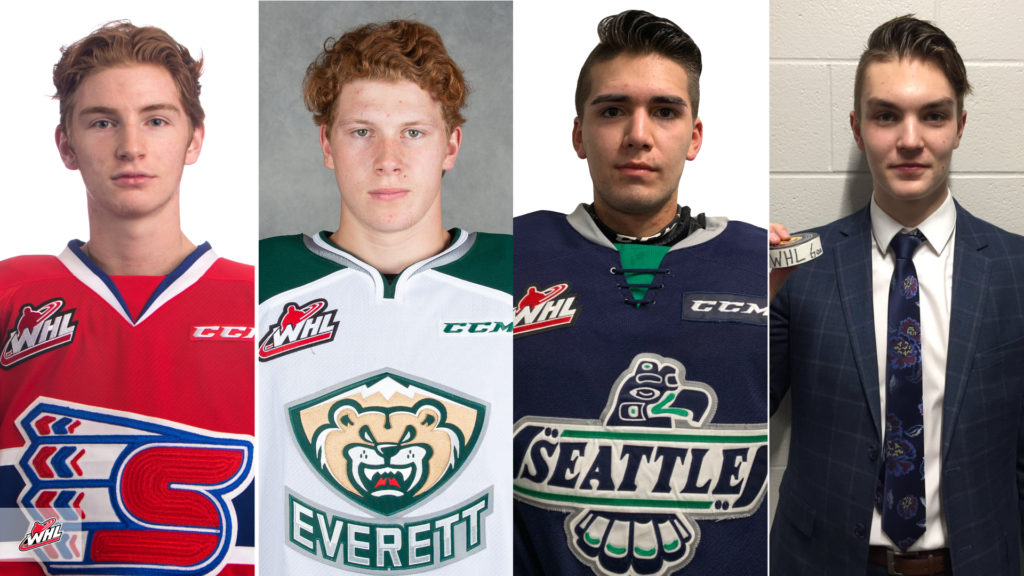 This week we take a look at the four players who have successfully attained their first career Western Hockey League goal or victory; keeping the WHL Firsts streak alive!

This week’s edition of WHL Firsts features a cast entirely from the U.S. Division accounting for the initial successes.

The 6-foot-1, 166-pound product of Abbotsford, B.C. was selected in the first round, 17th overall, by the Spokane Chiefs in the 2018 WHL Bantam Draft.

This kid has got a bright future!

In a solid 5-1 win over the Kamloops Blazers, Everett’s Conrad Mitchell notched his first career WHL goal, 9:19 into the second period. After a change for both lines left the Blazers behind the play, Jalen Price and Conrad Mitchell were in perfect position for a two-on-one opportunity. Getting a pass from the across the right side of the zone from Price, Mitchell was able to tap in the pass to earn his first WHL goal.

Drafted in the seventh round, 139th overall, of the 2016 WHL Bantam Draft by the Everett Silvertips, Mitchell hails from Thorsby, Alta. The 2001-born forward collected his first career WHL goal in his 26th game of the 2018-19 season.

Hailing from Meadow Lake, Sask., the 6-foot-4, 180-pound goaltender previously played in the Alberta Junior Hockey League (AJHL) for the Camrose Kodiaks. Ross’ game against Regina was his second official appearance of the 2018-19 season with the Thunderbirds after playing 35 minutes on January 4th against the Brandon Wheat Kings.

.@roddy_ross picked up his 1️⃣st WHL victory as the @SeattleTbirds doubled up the Regina Pats.

Kicking off a four-game East Division road trip with a bang was Seattle Thunderbirds player Zach Ashton. After being recently traded from the Saskatoon Blades, the 2001-born defenceman and his new team battled it out in Saskatoon for the first game of their road trip.

At 6:35 in the first period, Ashton’s shot from the blue line found its way through traffic to the Blades’ net, which marked his first career WHL goal. Ashton was originally selected in the third round, 50th overall, by the Saskatoon Blades in the 2016 WHL Bantam Draft.