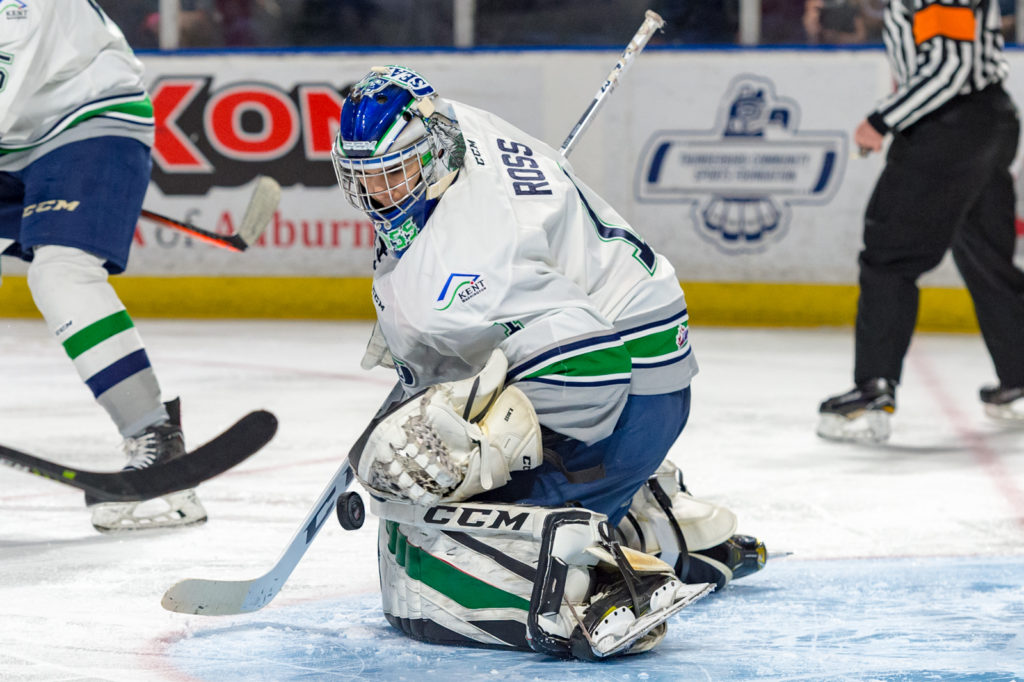 KENT, February 16, 2019 — Roddy Ross made 46 saves Saturday night at accesso ShoWare Center to lead the Seattle Thunderbirds to a 4-1 win over the Everett Silvertips.

Ross stopped 12 shots in the first period and 17 shots in both the second and third periods. His record is now 10-4-0-1.

The T-Birds travel to Portland to play the Winterhawks on Sunday at 4pm in a game that is being televised on JOEtv Channel 22/110.

Seattle improves to 23-27-5-1 and they are the second wild card playoff team in the Western Conference five points ahead of the Kamloops Blazers. The Blazers have two games in hand on the T-Birds.

Everett took a 1-0 lead on a power-play goal by Bryce Kindopp at 15:48 of the first period on assists from Conner Dewar and Zack Andrusiak.

Seattle tied it up 1-1 at 17:09 of the first on a power-play goal by Andrej Kukuca. Matthew Wedman chased the puck behind the Everett after a scramble play. Wedman sent the puck back into the crease and Kukuca jammed it past Everett goalie Dustin Wolf. Noah Philp had the second assist.

The T-Birds went in front 2-1 at 11:12 of the second period. Wedman won a faceoff in the left circle back to Jarret Tyszka at the left point. Tyszka took a slap shot with traffic in front of Wolf. Tyszka’s shot beat Wolf over the glove for his sixth goal of the season.

Wedman extended the lead to 3-1 at 8:47 of the third period on the power play. Henrik Rybinski passed the puck from behind the net to Wedman in the slot and he one-timed the puck over Wolf’s glove for his 31st goal of the season. Kukuca had the second assist.

Everett pulled Wolf with 2:40 left in the game for an extra attacker and the T-Birds capitalized five second later. Noah Philp passed the puck up the left boards to Payton Mount in the neutral zone. Mount hit the empty to secure the win. Jake Lee had the second assist.