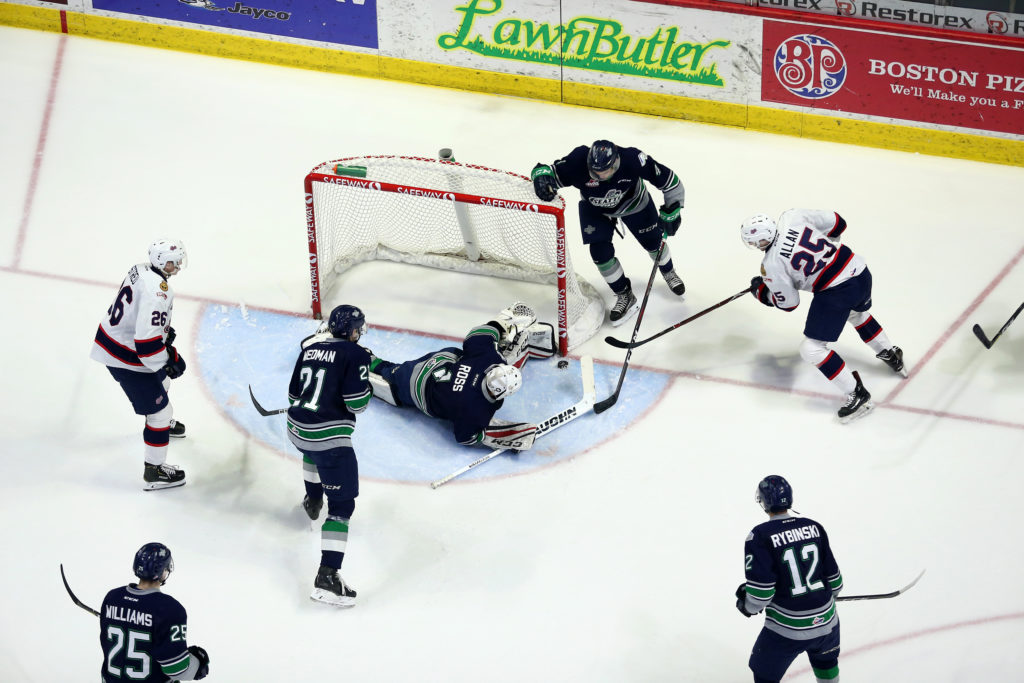 Ross stopped 19 shots to help the T-Birds to a 6-3 victory over the Regina Pats.

Andrej Kukuca and Noah Philp each had two goals in the game. Nolan Volcan had three assists and Payton Mount and Philp had two assists in the game.

Kukuca, in his first game with the T-Birds since returning from the World Junior Championship with Team Slovakia, put the T-Birds in front 1-0 at 7:34 of the second period. Tyler Carpendale won a puck battle in the left corner to Jaxan Kaluski. Kaluski carried the puck behind the Pats net and attempted a wraparound shot. The puck rebounded off Regina goalie Donovan McNabb’s right pad to Kukuca in the left circle. Kukuca snapped the puck past the goalie as he lunged to make a save.

Regina tied the game 1-1 at 9:04 of the first on a power-play goal by Robbie Holmes. Kyle Walker and Sebastian Streu had the assists.

Matthew Wedman got the T-Birds the lead back, 2-1, at 12:08 of the first. Volcan took a slap shot that was blocked by a Pats defender and came to Rybinski in the high slot. Rybinski fed the puck to Wedman who turned and fired the puck low on the glove side off the post and in. The assist was Rybinski’s first point as a T-Bird.

The Pats tied the game 2-2 at 18:30 of the second on a power-play goal from Sebastian Streu. Riley Krane and Austin Pratt had the assists.

The T-Birds had a 31-16 advantage in shots after two periods.

Seattle took the one-goal lead back at 1:54 of the third period. A Zach Ashton wrist shot attempt from the right point was blocked and Payton Mount picked up the loose puck inside the blue line. Mount came down the slot uncontested and got off a shot that McNabb stopped. The goalie couldn’t cover the puck though and Philp popped the puck into the net for his 14th goal of the season. The assist was Ashton’s first point as a T-Bird. He was acquired from the Saskatoon Blades on January 2.

Regina tied the game 3-3 at 4:16 of the third on the power play. Krane got the goal off assists from Holmes and Walker.

Jarret Tyszka gave the T-Birds the lead for good on the power play at 8:59 of the third. Mount had the puck in the left circle and found Tyszka at the high point. Tyszka took a wrist shot with Wedman screening McNabb. Tyszka’s shot beat McNabb on the low blocker side. Philp had the second assist.

Kukuca gave the T-Birds a 5-3 lead at 13:12 of the third with a five-on-three power-play goal. Philp carried the puck off the right wall to the high slot. Philp crossed the puck to Kukuca and he one-timed the pass high past McNabb for his second of the game. Volcan had the second assist.

Philp iced the game for the T-Birds at 17:52 of the third. Jeri-Leon passed the puck to Philp in the slot. Philp got off a shot that McNabb kicked out with his left pad. The teams were scrambling for the rebound before Volcan crossed the puck back to Philp and he beat the goalie high for his second of the game. The assist was Jeri-Leon’s first point as a T-Bird.

Philp has back-to-back two goal games. He scored two goals against the Brandon Wheat Kings on January 4 in a 7-3 loss.