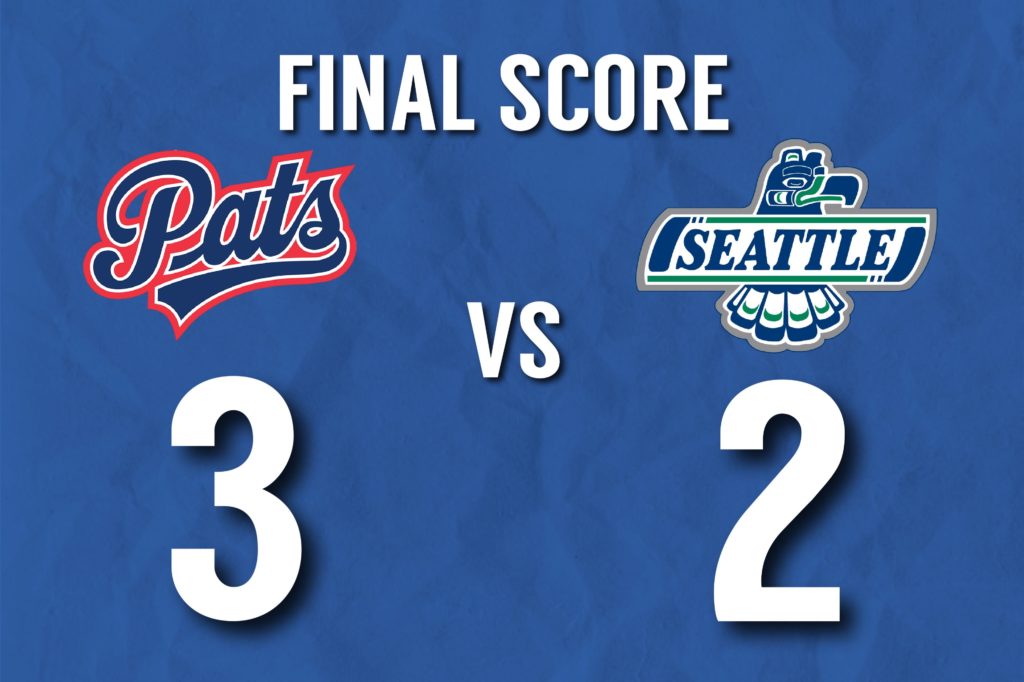 The Seattle Thunderbirds and Regina Pats headed west for Game 3 of this exciting Championship series. Regina steals back the edge taking a 2-1 series lead after defeating the Birds on their ice 3-2.

Both teams saw this game as a potential turning point in the series being the last six times when the Championship series was knotted at 1-1 the team who prevailed in game three went on to win the series. Regina has momentum after finding an overtime winner in Game 2, but Seattle gets to play at home in front of a great crowd. A fast, physical game is on the horizon with both teams looking to take a series lead.

Mathew Barzal gets penalized for hooking at 1:57 in the first period. This gives Regina an early power play, they scored quick in Game 2, and they look to capitalize here to start this one off. Regina find themselves with a flurry of chances, but nothing hits the back of the net. Off the faceoff the puck is passed low then up to the middle right by the blue line where Connor Hobbs releases a rocket off his stick and that shot beats Stankowski, for the first goal of the game. Josh Mahura and Sam Steel are credited with the assists.

Not long after the goal scorer Connor Hobbs trips Kolesar on his way to the net, giving Seattle their first power play of the evening. With time winding down on the power play Ethan Bear passes the puck to Barzal who seeks out Alexander True at the top of the crease. True with some fancy puck handling around the goaltender will score tying the game up, 1-1. Seattle continues to be dominant on the power play with a fast and forceful attack.

Wyatt Sloboshan of Regina is guilty of tripping gifting Seattle another power play, The T-Birds are hungry for their first lead of the night with another man advantage but can’t cash in on the opportunity. The power play was cut just short when Austin Strand is called for slashing, handing Regina the man advantage. Regina did what Seattle couldn’t and that is scoring on their second power play of the night. Almost identical to the first goal, Regina’s Chase Harrison has the puck at the blueline and rips a shot that works its way through traffic and finds the goal. This came off the assist from Nick Henry, Regina now leads 2-1.

The T-Birds don’t enjoy being behind and they solve that issue quickly after Regina goes up one. True passes the puck to Tyler Adams who shoots the puck to Sami Moilanen, right there in front of Regina goalie Tyler Brown and put the puck into the net leveling this game at 2-2.

Seattle’s Matthew Wedman, and Regina’s Braydon Buziak get tangled up and are sent to the boxes. With under a minute in the period Strand adds another penalty to his name. This gifts Regina the 4-on-3 ice time, but they are not able to convert.

The first period proved a physical game with Regina collecting three penalties while Seattle added on four of their own. Regina found two power-play goals to Seattle’s one. And Moilanen provided the only full-strength goal of the game to give us the 2-2 score line. When asked about how he felt his team responded after going down early in the first period head Coach Steve Konowalchuk said, “It was good, got going a little but even got a couple penalties and scored on a power play as well.”

To start the second period Kolesar losses the puck on the attack on commits a hooking penalty in the neutral zone to slow down the counterattack. Seattle is more successful in killing the power play this period as they get back to full-strength with no harm done.

Five minutes into the period Regina gets the puck moving forward with numbers, as Wyatt Sloboshan passes to Bryan Lockner who picks out Robbie Holmes through defenders. Holmes then shoots the puck to the upper corner of the net where Carl Stankowski stands no chance to make the save. Regina retakes the lead 3-2.

Filip Ahl drives hard to the net looking to extend the lead for Regina but unfortunately runs over Stankowski for goaltender interference. Seattle is on their first power play of the second period. Seattle has a few good chances but nothing to tie the game up. Regina takes another blow as Austin Wagner gets shaken up but shows resilience and keeps pressing on to try and help his team win.

Period three starts off with Seattle having a great opportunity but a stick save from a defender keeps the Regina lead at one. After a Seattle turnover Sam Steel drives the puck down the ice all alone but Ethan Bear interferes with the scoring opportunity forcing the refs to make a call. The refs call a penalty shot, and now Regina can double their lead. Steel takes the penalty and he brings the puck up the ice as Stankowski comes off his line a touch. Steel backhands the shot but is denied by a kick save from Stankowski.

Goaltending has been the headline of this period with no goals to show 15 minutes in. Both sides with exceptional chances to score but Brown and Stankowski are both up for the task. Stankowski comes up big with some amazing saves to keep Seattle within one. With just under two minutes to play Austin Wagner get a cross checking penalty, this will give Seattle a late power play to try and even things up. Roughly a minute later ice space is going to open up as minors on Seattle’s Barzal and Regina’s Sloboshan each sent to their respective boxes. Seattle pulls Stankowski to put an extra attacker on the ice. Big saves from Brown secures the win for the Pats and the late power play won’t be a factor as Regina wins 3-2. With the narrow victory in Seattle tonight Regina takes command of the series with a 2-1 lead.

Postgame Konowalchuk was asked how to slow the Regina power play which was very effective tonight scoring two of their three goals, “We still want to continue to make them make some plays under pressure and clear some traffic around the net.”

After the 3-2 loss Mathew Barzal commented about how this effects the team, “I thought our possession down low was pretty solid…we just got to bring that in tomorrow.”

Seattle seems to want to put this game behind them and move on which is promising news for fans. Kegan Kolesar gave us some insight into what’s going through his mind, “Were playing for a championship from here you go to the memorial cup.” Seattle looks to have their focus on and won’t let these losses bother them.

Lastly Alexander True was asked about playing at home he said, “It’s always nice playing in front of a home crowd…gives us good energy.” Things are looking up for Seattle with two more home games and a lot of positivity from the players and coach.