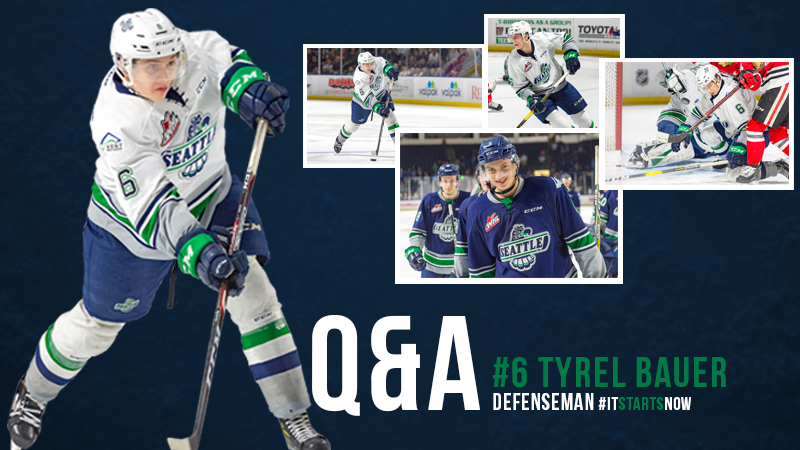 Tyrel Bauer appeared in 64 games last year in his rookie season with the T-Birds. Bauer registered two goals and 12 assists for 14 points with 91 penalty minutes. The Cochrane, Alberta native was recently named to the Hockey Canada Selection Camp for the U-18 Hlinka Gretzky Tournament. Bauer took some time to chat with us about last season and this coming season!

Seattle Thunderbirds: We’re glad you could take the time to join us Ty! First off, how’s your summer been?

Tyrel Bauer: It’s been great! I’ve been spending some time with friends and family, but it’s been mainly focused on training both on and off the ice.

ST: How have you been preparing for this upcoming season?

TB: Lots of hours in the gym or on the ice trying to get stronger and faster. That includes weights, stick handling, and conditioning to come into the season solid and ready to go.

ST: What areas of your game have you worked on the most to have a successful season?

TB: I have really been trying to improve my speed, agility, and skills. That includes quick feet drills, adjusting technique, and constant reps of stick handling drills and shooting.

ST: You were named to the Selection Camp for Canada’s National Men’s Summer Under-18 Team, how do you think that experience will be for you?

TB: It will be a great experience to help me grow as a player and as a person. I am going up against the best players in my age group, but it will be awesome to see where I stand and where I need to improve, but also it will be fun to meet new players from across Canada. Hockey Canada has an abundance of valuable resources I can learn from. I am excited to get out there and work hard to earn a spot on the roster. 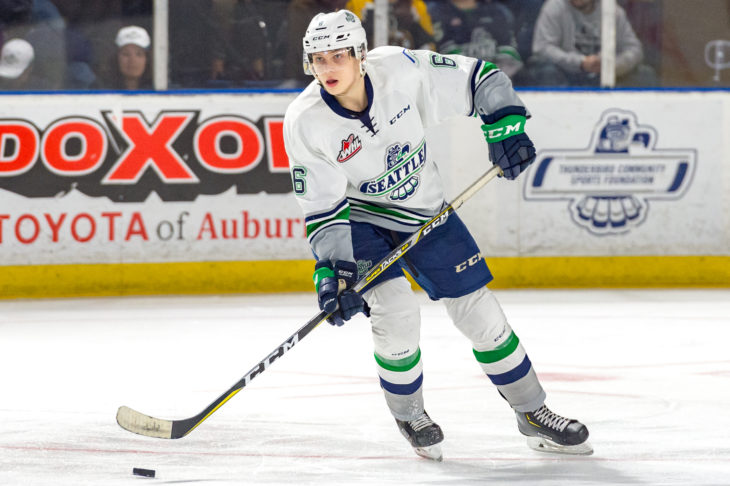 ST: What do you feel you can take from the U-18 team and use this upcoming season?

TB: There are many things you can take away from competitions such as this one. It will be my first experience on the international stage, and that is valuable to help me learn to perform in unfamiliar situations. Short term competitions can be challenging, you must adapt quickly to be successful and of course you must be both mentally and physically prepared.

ST: Do you have any pregame routine before games?

TB: I am not too superstitious or robotic about a routine. I do some light stretching and mental preparation to make sure I am at my best. I try to be loose and have some fun before the game so that I am relaxed when I play.

ST: What are your expectations for yourself and the team this coming season?

TB: I think we will be a competitive team again this year. We are getting stronger and stronger every year, and I feel that just because we are young does not mean we are weak. Our coaching staff and management do a great job of developing players and building team systems. The culture in the room is great, and that is also very important to be successful. For me personally, I just want to improve as much as I can. Going into my draft year I can’t be preoccupied with the analytics side of things. All I can do is play my game, work hard to improve every day, and try to have an impact in some way every shift I take. I am looking forward to another great season.

ST: Did you do any traveling during the off-season or plan to?

TB: We don’t have anything major planned. We take a trip to Saskatchewan every year to see family, so I always look forward to that. 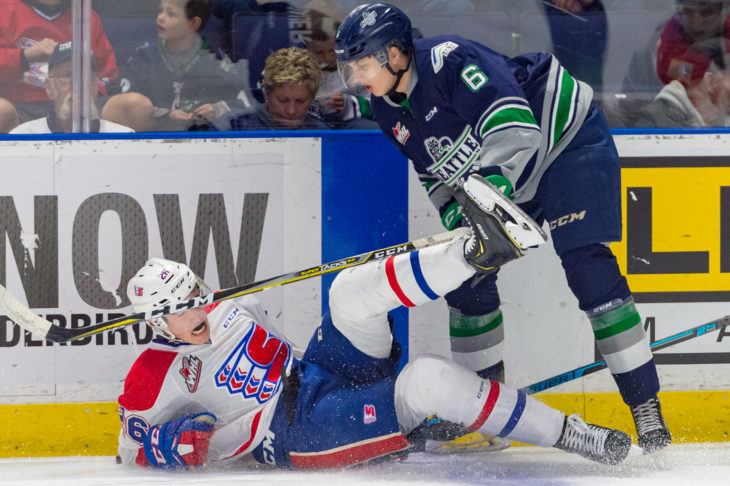 ST: What has been the most memorable moment for you as a T-Bird so far?

TB: That’s a tough question. There were so many fun moments on this team with the group of guys we’ve had. If I had to say one, probably when we beat P-A (Prince albert) in their home barn. Coming to the end of a long road swing and facing the best team in the CHL, we stepped up and played a real good game. The whole trip was great for team bonding and the feeling after that win was one to remember.

ST: What goals do you have for yourself this coming season?

TB: We’ve got to see how the season develops. Obviously one of my goals is to get drafted next year in June. As the season approaches, I will get more specific about some outcomes but for now I’m focused on improving overall.

ST: Aside from preparing for the season, what is it you do in your spare time? Any hobbies?

TB: I like the outdoors, such as camping and fishing. I also spend time with family and friends, and I like to hit the links occasionally, as well.

ST: Who do you look up to as a role model?

TB: My biggest role models are my parents. They are very hardworking and genuine people, who have shown me what it takes to be responsible, respectful, and stay true to my values and earn everything.

ST: When you first arrived with the T-Birds, what is the process like of getting to know your teammates and the rest of the organization?

TB: It was a new experience for me coming up as a young guy, but the staff and players made it a very welcoming environment. I was immediately treated as part of the team and got to know everybody as time went on.

ST: Last season you got your first taste of hockey playoffs in the first round against Vancouver. What’s it going to take for the team to advance further?

TB: I thought we did extremely well despite the outcome against Vancouver. Obviously, we wanted to go further and believed we could, but that’s hockey. It takes the entire team to buy in to make a push. We had that buy in last year and throughout the course of the year, teams’ bond and build chemistry. By the time playoffs come it’s second nature. It takes sacrifice, focus, and adaptability to be a successful team, and all are traits I believe we will continue to have in our dressing room next year. 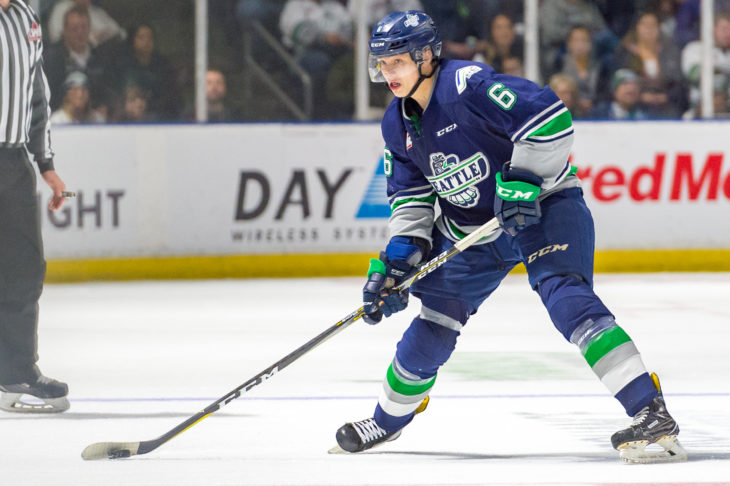 ST: What is your favorite part about the states and being in Seattle?

TB: Seattle is a beautiful city. We have been downtown a few times on days off or for team events, and the surrounding areas are also very nice. The fans are awesome, and the weather is a lot better than the piles of snow back home! It feels like a second home to me, and my billets have played a large part in that as well.

ST: Do you have any nicknames and if so, what is that the team, players, and coaches call you?

TB: I am subject to anything the team comes up with. It changes over the years, but last season I guess they called me “Bowsy”.

ST: Watch any good movies over the off season or check out in good shows?

TB: Just getting caught up on everything I missed. I heard Toy Story 4 and the new Lion King are out, those might be worth a watch!

ST: Thank you very much for your time Ty. We can’t wait to see you at Training Camp!