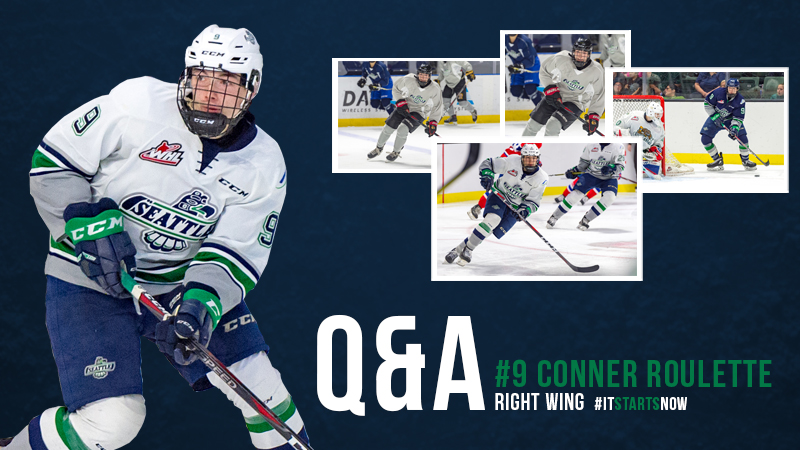 Conner Roulette was selected by the T-Birds in the second round, 34th overall in the 2018 Bantam Draft. Roulette, from Winnipeg, Manitoba, had 41 goals and 47 assists for 88 points in 43 games with the Winnipeg Thrashers Midget AAA team in the 2018-19 season. He made his T-Birds debut January 4 in Brandon against the Wheat Kings. Conner took some time after returning from the 2019 U16 Ball Hockey Tournament in Czech Republic to answer some questions.

Seattle Thunderbirds: Thanks for joining us Conner! How has your summer been so far?

Connor Roulette: Hey, thanks for having me! My summer has been very good so far with a lot of traveling and training. Also, having a lot of family time and it’s been great to see my family.

ST: You recently returned from the Czech Republic where you won a gold medal with Team Canada West in the U16 Ball Hockey Tournament. What was this experience like?

CR: The experience we had in the Czech Republic is definitely one we will never forget. It was very nice in the places we visited, the ball hockey itself was very hard, and it was very cool to play against the European teams. Winning gold was the best part because the team was unreal, and my teammates were high class players!

ST: Ball hockey and ice hockey are obviously pretty similar. But what would you say the differences are between the two?

CR: The biggest difference between ball hockey and ice hockey would probably be the way you think while you play. Because the ball spins so much and bounces, it’s quite the thinking game when it comes to how you’re going to make a play or pass with a bouncing/spinning ball. Another difference is the floor, especially when you’re used to gliding and stopping on ice, it’s a huge shift. When you’re running and moving laterally everywhere it’s something that you’re not used to while playing ice hockey. 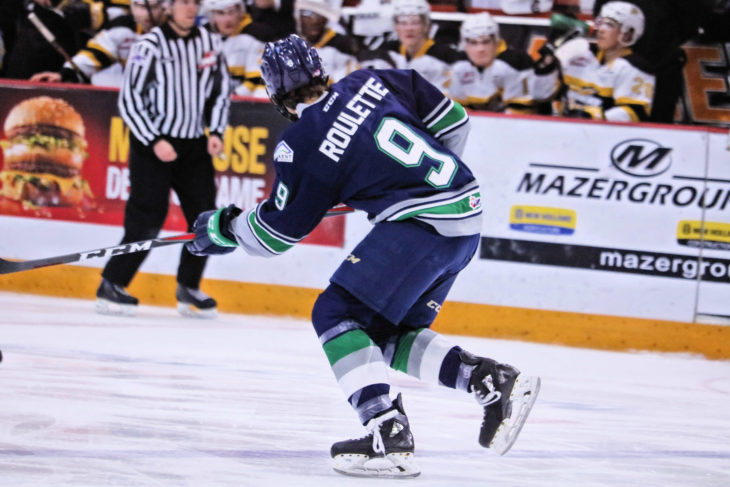 ST: There were quite a few Manitobans on Team Canada West. Do you think you could face any of them in the WHL?

CR: For sure, a lot of the players on West I think could play in the WHL. There’s a lot of high-class guys on and off the ice. Guys like Hyland, Pasternak, and Goodbranson, are complete players with skill and awareness. I think the guys on the team would be great WHL players. It was truly an honor to play with them, especially at the world level for ball hockey.

ST: For our fans that have not seen you play; can you describe your style of play? Are there any NHL players you try to model your game after?

CR: As for my style of play, I would say I’m a full offensive type of player. I really like to score, make plays, and can make really good passes; I like to pass first if I have the chance. I’ve always been a guy who puts up points, but if I’m not putting up points, I always try to find a way to help the team win. I always try to model my game after Sidney Crosby, because he is a complete player that can make unreal passes but also score. He’s always even with goals and assists after a season. Off the ice, Crosby is a world class professional when it comes to community and other people and I think that is awesome, so I really try to be like him off the ice. He is a leader and I try to be a leader as much as I can.

ST: You made your T-Birds debut January 4 in Brandon. When did you find out you would be playing against the Wheat Kings, what was the debut experience like and did you have family at the game?

CR: The experience in Brandon when I played my first game was awesome! I couldn’t have thanked the T-Birds enough for letting me suit up for that game. It was unbelievable to finally be in the lineup and just to play in the WHL. It has always been a dream of mine to play in my first game and, man, was I excited to finally be there! Being from Manitoba and being indigenous, I had lots of family and friends come from around Manitoba to the game. A lot of people from my home reserve came to watch, and that really gave me confidence because of all the support I had. I was very happy with the way it turned out and it was awesome to see my family and friends at the game! 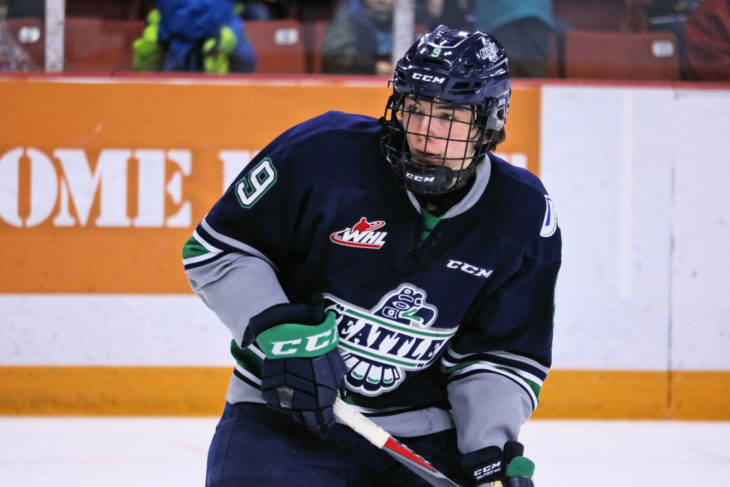 ST: What did you know about Seattle before being selected by the team?

CR: Before being drafted by the T-Birds I knew a bit about them; I grew up watching Keegan Kolesar and Ethan Bear play. They were teammates of my brother and I would be the water boy and #1 fan at every game. When I grew up, I was able to finally watch them play on tv and cheer them on. They have been great role models for me, and I will definitely try my best to be like them while I’m with the T-Birds!

ST: You played on Team Manitoba at the 2019 Canada Winter Games in February. How was that experience?

CR: The experience at Canada Games was awesome. It was great to play against all the best players in Canada and to be part of a team like Manitoba, was an honor. The team was great and the guys on Manitoba were great teammates.

CR: You will be taking part in the Hockey Canada U17 Selection Camp shortly. What are you focusing on to get ready for this prestigious camp?

ST: I’ll be focusing on just strengthening myself and preparing for the camp. I’m looking to improve speed and strength but in the little time, everything counts. So, I’m just looking forward to being in the best shape I can be and preparing mentally for what’s to come. It’s a hard week of work and I plan to be mentally prepared.

ST: What do you think the transition will be like coming to play in Seattle?

CR: I think the transition will be pretty different from what I’m used to. Growing up in Winnipeg and being in a small city in the prairie compared to moving to Seattle on the west coast. I’m looking forward to it! I’m very excited to hopefully be able to stay in Seattle and make the best of it. It’s going to be a tough transition when it comes to level of hockey and skill level, but it’s something that everyone had to adjust to, so I’m looking forward to adjusting to the WHL level.

ST: How did you get into playing hockey? Was there someone that specifically inspired you? 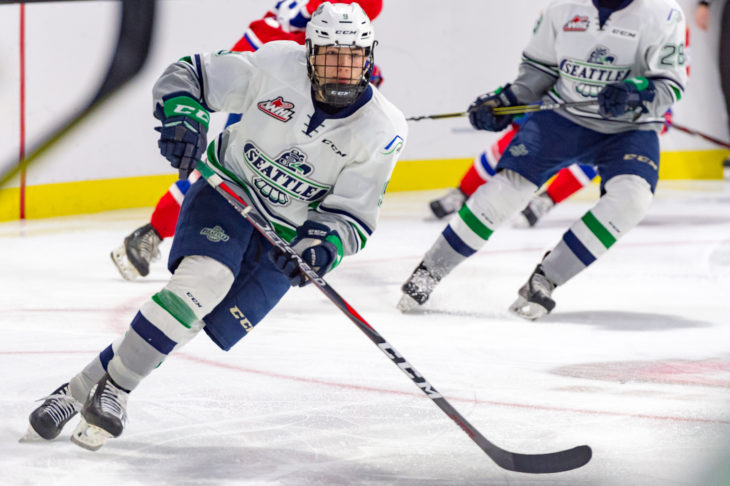 CR: I got into playing hockey from my family. My family has all played hockey, and really got me into it. I was also inspired by Sidney Crosby when I was growing up, and I always wanted to be like him while I was older. I would always wear 87 and his jersey when I could.

ST: Do you have any special pre-game routines?

CR: For my pre-game routine this year while I was playing with the Thrashers, I would have a cold bath before every game and during the on-ice warmups I would do the exact same warm up routine for every game. I also would tape my stick before every game, and I put my equipment on right to left.

ST: Tell us an interesting fact about yourself.

CR: An interesting fact about me is that both sides of my family are highly involved in music. I’m pretty sure everyone in my family can play a guitar or the drums. Growing up I was able to play instruments and was really interested in every genre of music there is. From 50’s pop to the newest rap song, I listen to every song type and every style of music. I’ve always loved music, being a part of music classes at school, and going to concerts.

ST: Thank you for your time, Conner. See you at Training Camp and good luck in the U-17 camp as well!

CR: Thanks for having me and I’m very excited for camp! Can’t wait.