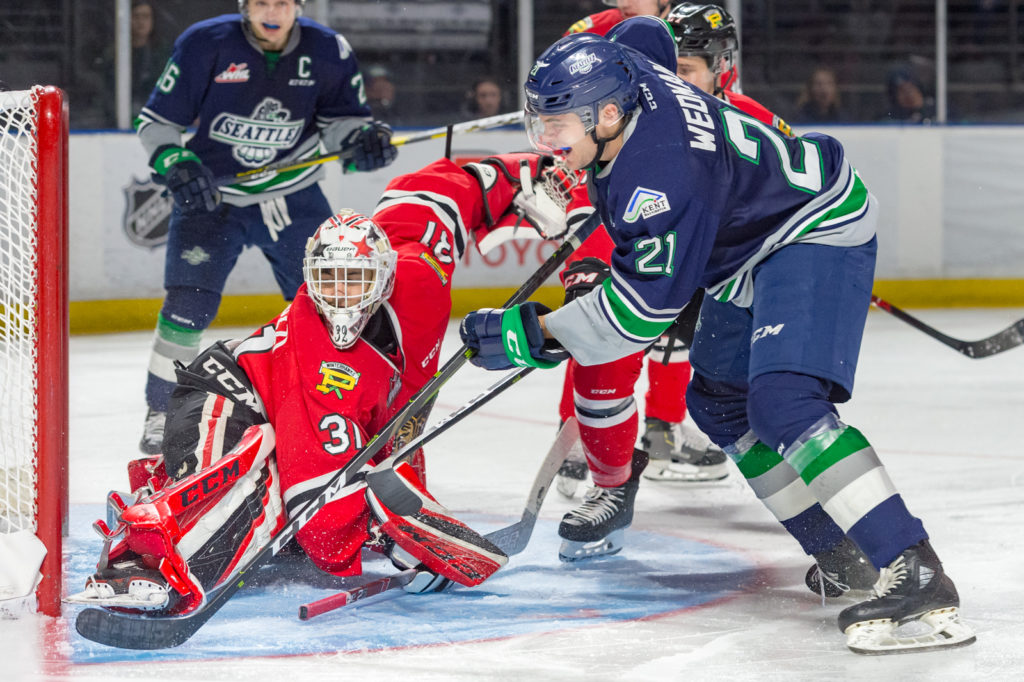 The T-Birds next game is Friday, March 1, at the Kamloops Blazers. The T-Birds are the second wild card playoff team in the Western Conference. They are five points ahead of the Blazers, who have two games in hand.

Seattle took a 1-0 lead 2:05 into the first period. Henrik Rybinski won a puck battle behind the Portland net. Rybinski found Matthew Wedman in the low left circle with a pass. Wedman snapped the puck over Portland goalie Joel Hofer’s blocker for his 33th goal of the season. Wedman now has a 10-game point streak of 10 goals and seven assists.

Owen Williams put the T-Birds in front 2-0 at 8:04 of the first. Portland attempted to clear the puck up ice but it hit Williams in the back. Williams collected the loose puck and skated into the left circle. Williams beat Hofer over the glove for his fourth goal of the season.

Andrej Kukuca made it a 3-0 lead on the power play at 9:42 of the first. Noah Philp won the puck behind the Portland net and found Jarret Tyszka at the left point. Tyszka took a slap shot with Kukuca in front of Hofer. The Portland goalie made the save but Kukuca battled through a Portland defenseman and knocked the puck past Hofer.

Portland got on the board at 1:57 of the second period on a goal from Clay Hanus. Reece Newkirk and Nick Perna had the assists.

The Winterhawks cut the lead to one at 2:24 of the second when Lane Gilliss scored off an assist from Robbie Fromm-Delorme.

Portland tied the game 3-3 at 3:21 of the third period on a goal from Jared Freadrich.

Portland’s Seth Jarvis was the only shooter to score in the shootout.