Pats Slide Past Thunderbirds In Overtime To Tie Series 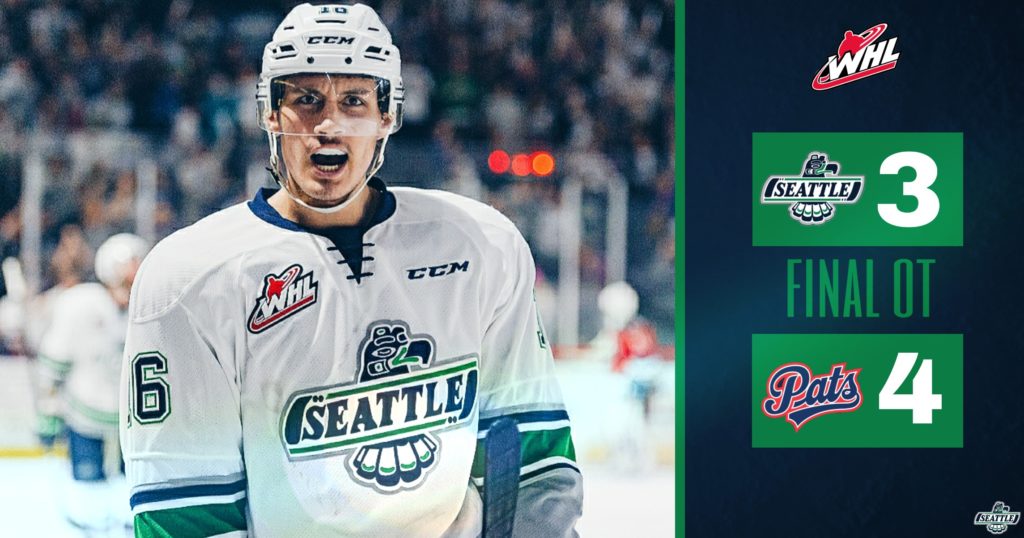 This story on Game 2 was written by Jade Gilson, a junior at Kentlake High School. Jade also produced the graphics you see in the story.

After a hard fought battle, the Seattle Thunderbirds were defeated by the Regina Pats in overtime at the Brandt Centre on May 6, 2017.

The final score of Game 2 was 4-3, which ties up this exciting WHL Championship Series.

Sam Steele scored Regina’s first goal at 0:50, setting the competitive tone for the remainder of the game. Neither teams scored any more goals during the first period.

Following an aggressive start to the second period, defenseman Austin Strand sent a shot straight at Regina goalie Tyler Brown. The shot was then tapped into the net by Tyler Adams, crediting him with the goal. This tied up the game 1-1 at 3:56.

16 seconds after Adams’s goal, Turner Ottenbreit fired a slapshot from the blue line straight into the net, which put the Thunderbirds in the lead 2-1.

Wyatt Sloboshan of the Regina Pats was penalized for tripping, granting Seattle their second power play of the night. Ryan Gropp and Ethan Bear set up Alexander True to score a power-play goal to secure a 3-1 lead.

Ethan Bear was interviewed during the intermission of the second period and said, “I think just using our speed and keeping it simple.” Bear said, when asked what allowed Seattle to take over the game in the second, “we try not to give any second chances.”

The third period was started off by Filip Ahl’s unassisted goal at 5:20, which tied up the score at 3-3. Both teams continued to play an extremely competitive and fast-paced game until the buzzer concluded the third period.

Both teams went into Game 2 overtime hungry for the win. Game 2 was terminated by Josh Mahura’s power-play goal at 5:22, his second goal of the night, to tie up the series 1-1.

Game 3 of this exciting series is on May 9th, 2017 at the accesso ShoWare Center. Seattle fans expect to see this same aggressive and exciting play to see who will become victorious at the end of the WHL Championship.