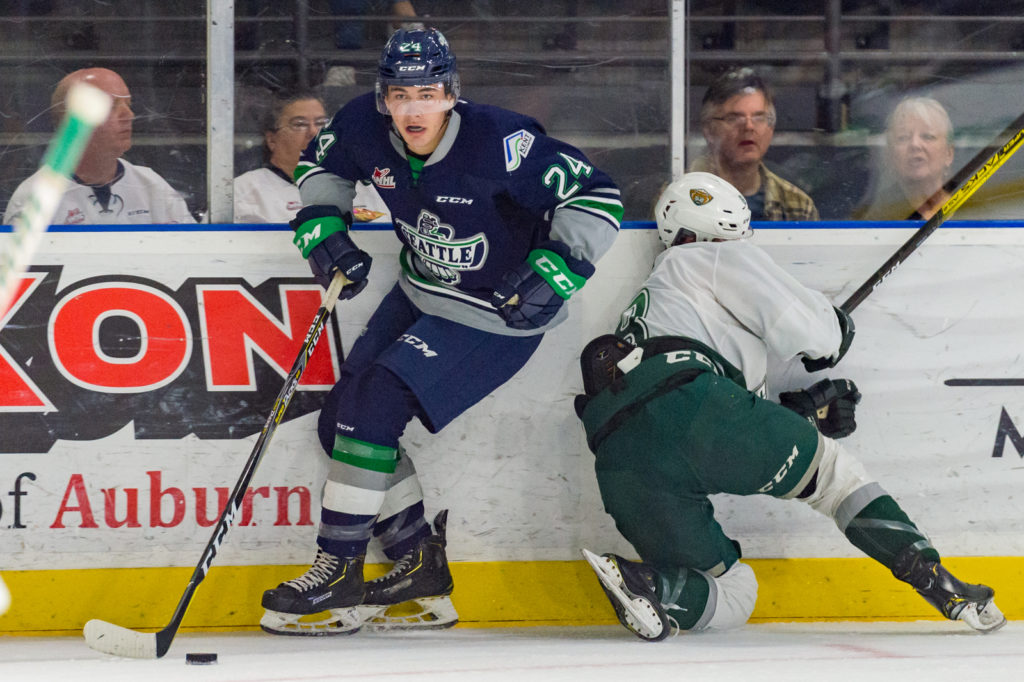 KENT, September 10, 2019 — Alex Morozoff was acquired by the Seattle Thunderbirds on Monday from the Red Deer Rebels. Tuesday, he scored two goals in his debut to lead the T-Birds to a 5-4 victory over the Everett Silvertips at accesso ShoWare Center in the final preseason game for both teams.

Defenseman Hunter Donohoe also made his T-Birds debut in the game. Donohoe was acquired from the Rebels on August 26.

Everett took a 1-0 lead on a goal by Jalen Price with six seconds left in the first period.

T-Birds struck four times in the second period to take a 4-1 lead after 40 minutes.

Morozoff scored at 10:40 the second to tie the game 1-1. Zach Ashton hit Lucas Ciona with an up-ice pass on the left wing. Ciona feathered the puck to Morozoff as he crossed the blue line for a partial breakaway. Morozoff beat Everett goalie Braden Holt over the glove.

Morozoff was acquired from the Red Deer Rebels on Monday for a fifth round pick in the 2021 Bantam Draft.

Seattle took a 2-1 lead on a delayed penalty power play at 16:35 of the second. Andrej Kukuca had the puck at the right point. Kukuca crossed the puck to Keltie Jeri-Leon at center ice. Jeri-Leon moved the puck to Owen Williams who skated into the left circle. Williams beat Holt with a wrist shot over the blocker with traffic in front of the goalie.

Morozoff struck for a second time in the game at 19:24 of the second. Cade McNelly won the puck off the left boards in the neutral zone. Kukuca swept the puck to Morozoff who gained the offensive zone. Morozoff skated into the left circle and beat Holt over the glove.

Kukuca put the T-Birds in front 4-1 with 18 seconds left in the second period. Conner Bruggen-Cate took a shot that Kukuca tipped past Holt. Tyrel Bauer had the second assist.

Everett cut the T-Birds lead to two goals at 1:30 of the third period on a power-play goal by Gage Goncalves.

Seattle went back in front by three goals at 5:09 of the third. Jeri-Leon passed the puck to Brendan Williamson on the right wing. Williamson entered the offensive zone and beat Holt with a wrist shot over the blocker from the right circle.

Dawson Butt scored an unassisted goal at 15:16 and Goncalves scored a six-on-four power-play goal at 18:10 to cut the T-Birds lead to one goal.

Everett pulled their goalie for a second time and Seattle goalie Blake Lyda made several good saves to secure the win. Lyda finished with 25 saves on 29 shots.