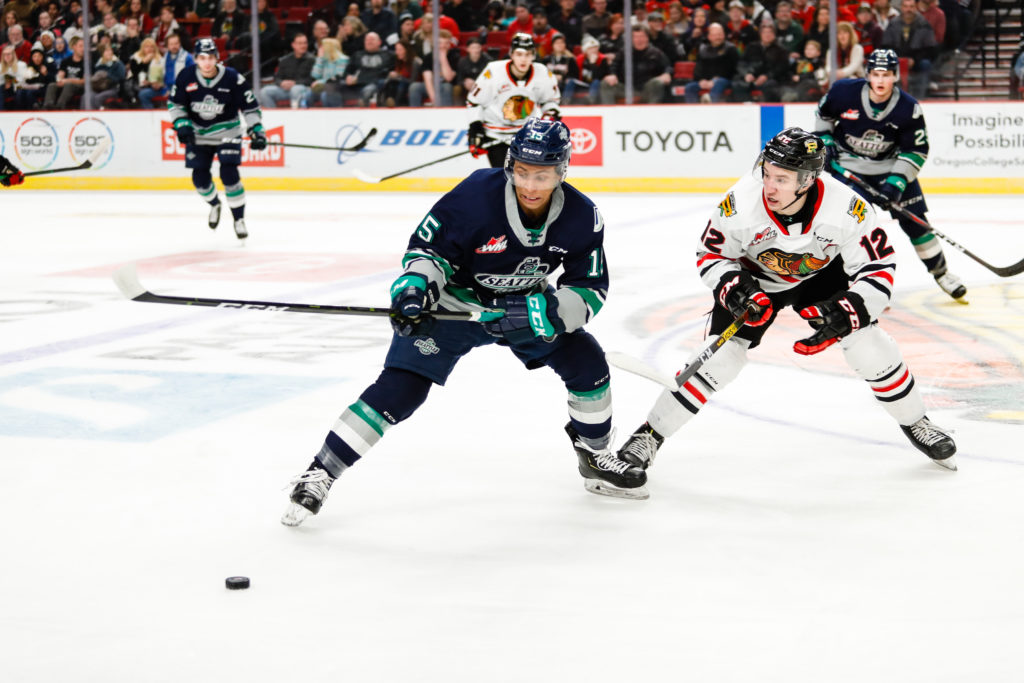 The T-Birds head out for a three-game road trip to the Central Division starting this Friday in Lethbridge against the Hurricanes at 6pm. The play the Medicine Hat Tigers on Saturday at 6:30pm and the Swift Current Broncos on Sunday at 2pm.

T-Birds next home game is Saturday, January 11, against the Everett Silvertips at 6:05pm in our annual Fred Meyer Teddy Bear Toss presented by WARM 106.9 FM. Single game tickets are on sale online on the T-Birds website and at the accesso ShoWare Center box office.

Mekai Sanders, who is from Gig Harbor, Washington, made his WHL debut in the game. Sanders was selected by the T-Birds in the ninth round, 186th overall, in the 2018 Bantam Draft. Sanders signed a WHL Standard Player Agreement with the T-Birds on June 19, 2018. Sanders had missed the previous 34 games with a lower body injury.

In the last game of the decade, Mekai Sanders makes his WHL debut against Portland. #ItStartsNow #LetsGoBirds pic.twitter.com/mxCVws5ikQ

Seattle took a 1-0 lead at 5:50 of the first period. Lucas Ciona kept the puck in the offensive zone along the right boards with a good stick check. The puck came to Keltie Jeri-Leon who skated at the Portland net. Jeri-Leon put a shot through the crease. Cade McNelly pinching down from the left point got the puck and beat Portland goalie Isaiah DiLaura short side for his first goal of the season.

The Winterhawks took a 2-1 lead at 10:52 of the first on a goal from Kishaun Gervais.

Portland made it 3-1 at 10:30 of the second period on a goal from Jaydon Dureau.

Conner Bruggen-Cate cut the Portland lead to one goal at 11:32 of the second. Matthew Rempe played the puck off the right boards in the defensive zone to Andrej Kukuca who headed up ice on a two-on-two break with Bruggen-Cate. Kukuca took a shot that hit DiLaura and Bruggen-Cate poked in the rebound.

Bruggen-Cate now has a three-game goal streak with three goals and three assists in the last three games.

Seattle got their first power play of the game with 2:49 left in the game. The pressured and got several good scoring chances. Seattle pulled Ross with one minute left for an extra attacker and kept the pressure on. They were not able to secure the tying goal though.