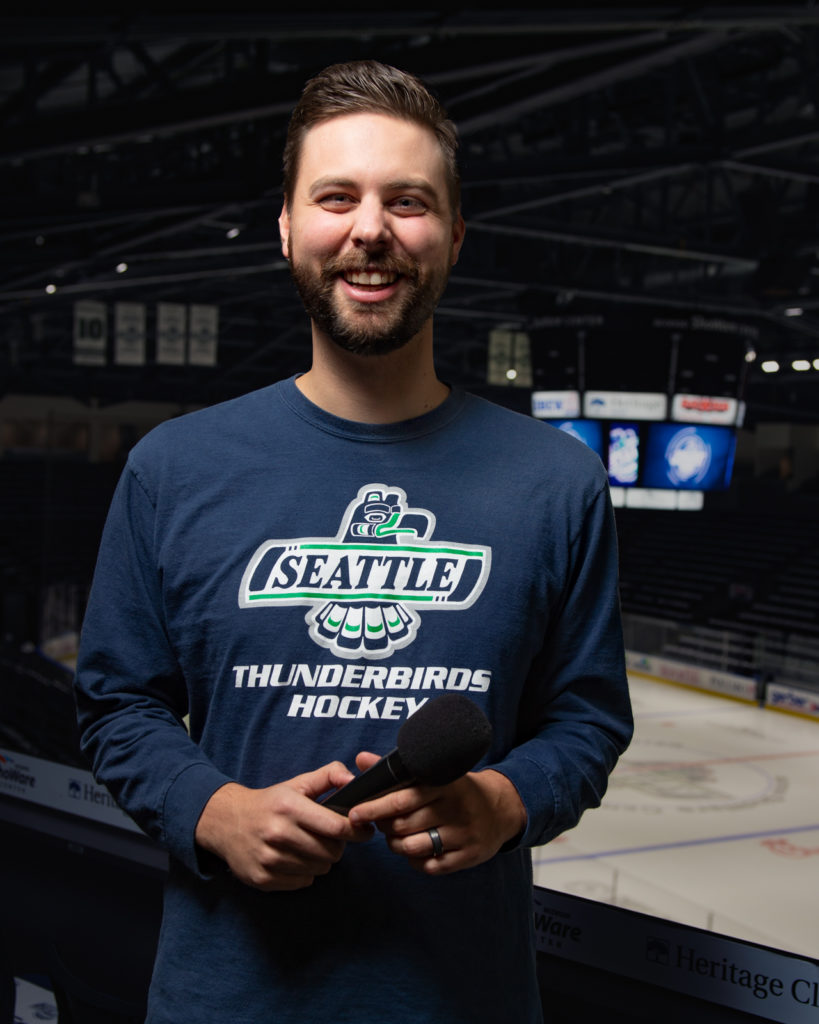 I’m the arena emcee for the T-Birds games at the accesso ShoWare Center. I spend game nights making announcements, playing games, giving away prizes, and doing my part to see that every fan leaves the ‘Sho feeling like they had an awesome night!

This is my fifth season with the Thunderbirds – I’m originally from the Seattle area, and joined the organization after I graduated from college in Southern California and moved back home in 2015.

I love getting to know our fans… We have some really passionate Thunderbirds fans, and it’s been really cool spending time building relationships with them – whether it’s in the moments leading up to a frozen Ding Dong eating game, sitting next to the season ticket holder of the night and waiting for a whistle, or just hanging out on the concourse before the game.

To be honest, I have the easiest job in the world with the T-Birds… I mean come on! I hang out with fans, give away cupcakes, make a couple of over-confident guys look like fools on the ice during the first intermission, announce a winner for the 50-50 prize, and occasionally get some down time to watch a hockey game. I have it pretty good!

I, unlike many of our staff and fans, haven’t been around the Thunderbirds for very long. That said, I have two very vivid memories…The first is the home opener of the 2015-2016 season, a 4-1 win over Prince George, which was the first time I ever turned on the mic at the ‘Sho. And the second is Wedman’s winner in Game 4 against Kelowna in the 2016 Western Conference Championship – that was an awesome night.

Casey stole my Michael Scott quote…But I do enjoy having a routine on game nights. Just before doors open, I like to sit in section 115 (center ice – row 11 – seat 11) for about 20 minutes. I take some time to relax, listen to music and gear up for the night.

I am! While I can’t say I’m super familiar or ingrained in the National Hockey League, I’m really looking forward to seeing the city of Seattle competing with some of the biggest names in hockey!

I’m a promotions and marketing director with iHeartMedia Seattle, which is where I spend most of my weekdays. I love spending time with my amazing wife Taylor and our Shih Tzu – Scooter; I really enjoy cooking, but I’m terrible at following recipes; I’m extremely competitive and love playing cards or board games; and I love grabbing a cold drink, settling in, and watching “the game” – whether its Mariners, Sounders, Seahawks or T-Birds on the road.

I’d probably be a goalie. I’m a terrible skater… keeping me in one spot for the game would be a benefit to everyone on the ice.

As a Seattle sports fan, I’ll live and die by the “Portland sucks” mantra. I know I don’t have as deep a history of the T-Birds-Winterhawks rivalry, but from my perspective over the last five years, I can tell you losing to Everett on home ice puts me in a bad mood for a good 24 hours.