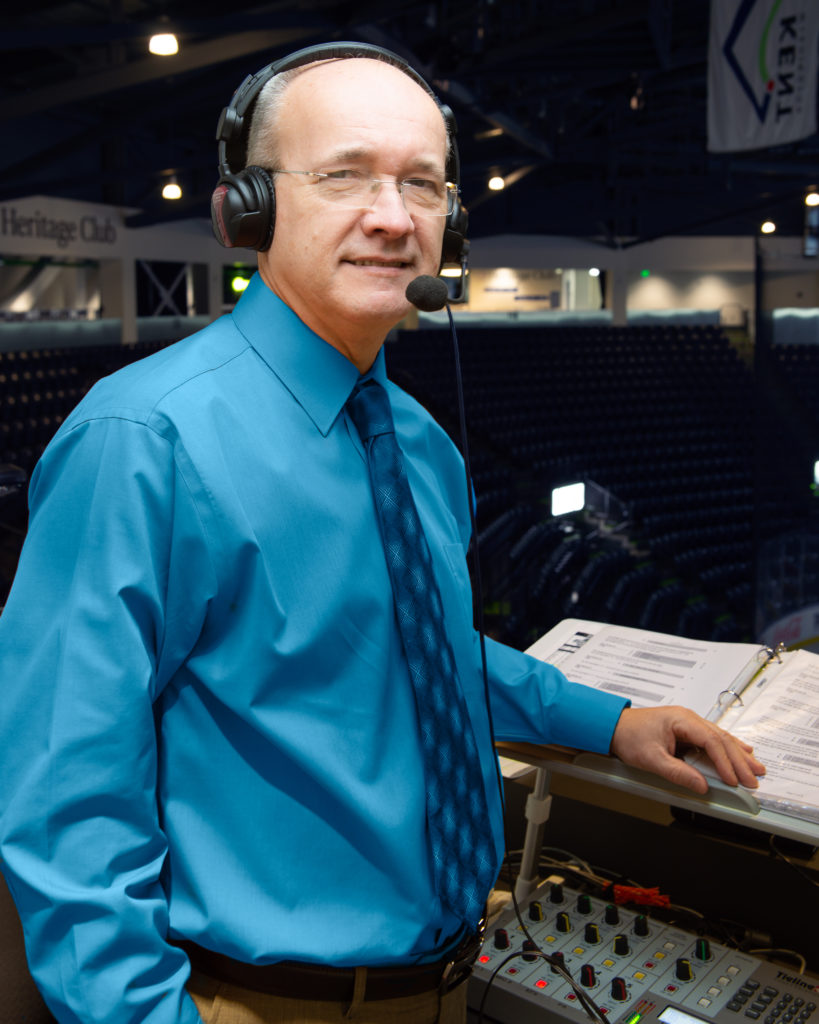 What Do you do for/with the Thunderbirds?

This is my 19th season with the organization and my 24th season of doing hockey play-by-play, having worked previously with the Tacoma Sabercats and the Tacoma Rockets.

I enjoy being the eyes and for the fans who cannot attend games.  I try to paint a picture of what is happening so they can feel as if they are right there at the arena, with a front row seat to the action.  I see my job as delivering a three hour infomercial, to sell the listener on Thunderbirds hockey.

Every broadcast vantage point around the league has a drawback, no matter how major or minor it may be, to seeing everything that happens on the ice.  Usually it’s along the boards on the side of the ice where I’m sitting.  Sometimes it may just be fans standing up that obscures my view or my distance from the action affects my call.   That makes it a challenge at times to get an accurate picture.  After games I often ask a player or coach what happened on a specific goal or penalty, and it might be different from the way I saw it.

There are so many.  In general, the two straight runs to the WHL Championship Series in 2016 and 2017 stand out, with the Alexander True goal being the biggest moment.  But my first year, a heavily underdog Seattle team took out Portland in a first round playoff series.  Seattle got into the postseason that year with a young roster.  They won just 21 games, 15 fewer then the Winterhawks. They won that series, 4 games to 3, winning Game 7 down in Portland, 3-2, on Trevor Johnson’s third period goal.  That young roster featured three future NHLers in Nate Thompson, Brooks Laich and Steve Goertzen.  It was a great introduction for me, into the rivalry.

Yes, I always check to make sure all my equipment works and I can get a connection back to our studio in Seattle.  It doesn’t matter how early we arrive at the arena.  That is my first order of business.  Of course it doesn’t prevent gremlins from jumping up and biting you just before air time.  No superstitions though.  I put on my lucky socks just like everyone else does, one foot at a time, left foot first.

Certainly.  When I was young I lived for three years in the Toronto area and another three just outside of Chicago.  That’s when I fell in love with the game.  I just thought NHL hockey was a natural part of the sports landscape everywhere.  It was pretty disappointing to return to Tacoma and there was no NHL team, and very little coverage of the NHL in the local media.  My family left the Chicago area just after the Blackhawks had lost the 1971 Stanley Cup Final to Montreal.  I was looking forward to the next season and a chance at redemption.  It was like the next season never happened.

What do you enjoy doing when not working with/for the Thunderbirds?

I love to study history.  I do a lot of reading about historical figures or historic moments.  Among the books I read this summer was “The Somme”, which recounts the bloody cost of the First World War, especially for the British, and “Dereliction of Duty”, about many of the missteps that led up to and into the early years of the Vietman War.  I’m currently reading a biography of Harry Truman.  I’d like to do more traveling, just not on a bus. Oh, and I‘m also owned by two dogs, Sam and Jelly, and they like to take me for walks.

Well, in my beer league days I played every position but goalie.  It was more out of necessity then by virtue of any actual talent.  It all depended on who showed up for our games.  But I think I did well at center.  I was fairly adept at taking faceoffs.  I found out the key to playing center in a beer league, is to do your beer consuming after the game, and not before.  I didn’t score a lot, but I found out I got more goals by letting the puck hit me and ricochet into the net, then I did by actually shooting, so I didn’t mind standing in front of the goal.  Didn’t matter which goal either.

While the gap may be closing between Portland and Everett, it still is the Winterhawks.  As long as Seattle has been in the league, Portland has been there.  There is a reason they play them 12 times a season.  And it’s not just the T-birds versus Winterhawks, it’s city versus city, state versus state.  If you’re a T-bird fan you’re probably a Husky fan and a Sounders fan too.  If you’re a Portland fan you probably also cheer on the Timbers and Ducks.  The Sonics and Trailblazers used to be part of that equation too.  Meanwhile so many Silvertips fans are also fans of the other teams T-birds fans root for. At the end of they day T-birds and ‘Tips fans root for the Seahawks, Mariners, Sounders and Huskies and in a couple years will root for the same NHL team too.

Where can you find me on social media?

I’m on Twitter at @ThomBeuning and write my In The Corner Blog.