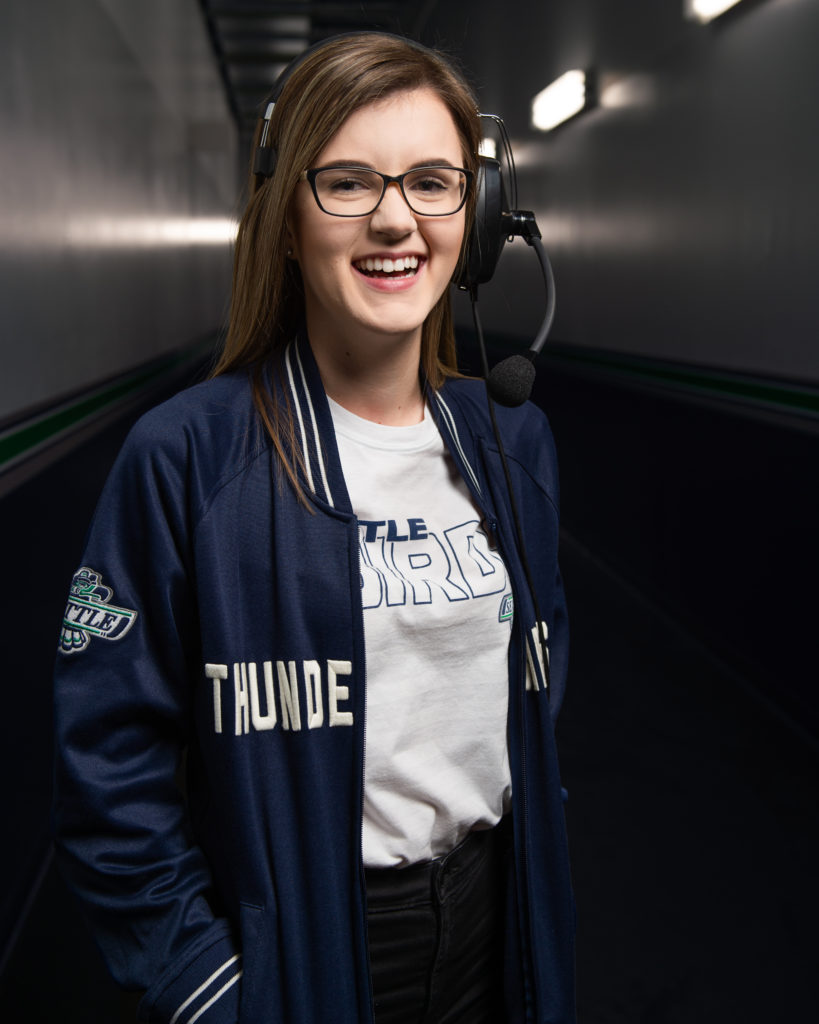 Team photographer Brian Liesse is introducing T-Birds fans to those connected to the team whose contributions might not be readily visible. We are excited about this project because we get to highlight those that make T-Bird hockey possible through their hard work and dedication to the team and the sport of hockey. We look forward to introducing you to T-Birds staff, accesso ShoWare Center staff, Booster Club members, Game Night Staff, Media, and others who help us celebrate and promote the team and the sport in the Pacific Northwest. Each person highlighted has answered a questionnaire about what they do with the team and some personal highlights. Brian took the photos of each person in their T-Bird environment.

I am the Office Manager, so I handle office orders, phone calls, emails and running the front desk. I also handle the T-Birds Instagram and Snapchat accounts during home games as well as being a part of the Promo Crew.

Three years all together. Started as an intern, then was part time on promo and then was hired on full-time as Office Manager at the beginning of last season and have become Office Manager, Guest Relations and Promotions coordinator recently.

There is so much that makes this the best job… getting to know the fans, watching young players turn into professionals, creating new content to attract new fans, going to all the home games. It is hockey all the time and I work with people that have quickly become close friends, even family.

Probably trying to stay current while also being innovative with social media posts, keeping fans engaged and entertained while also creating new fans with our content.

I have two. The first is championship year, I was in my college apartment where I could only listen to the game then being on the phone with my boyfriend who was watching the game so I was listening to two different feeds and my boyfriend’s wasn’t delayed like mine was so I heard him celebrate the True goal before I heard it so I was panicking that I missed something and then celebrating the win all within 10 seconds. Second would be going to Vancouver for playoffs last year and being in a group with 20 people who were determined to be as loud as possible to support our team and make it a home game rather than a road game. I think we achieved that with flying colors.

Honestly, not really. I always have a coffee before a game just to keep me going so maybe that can be my ritual.

Absolutely 100%. Any way to spread the love for the game around the PNW is great.

I would want to be a center, zipping around the ice quarterbacking the plays and getting into those tight scoring positions. Right now, I’ll stick to watching rather than playing.

Portland is a true rival whereas Everett seems to just be a rival when we are playing them in the moment.