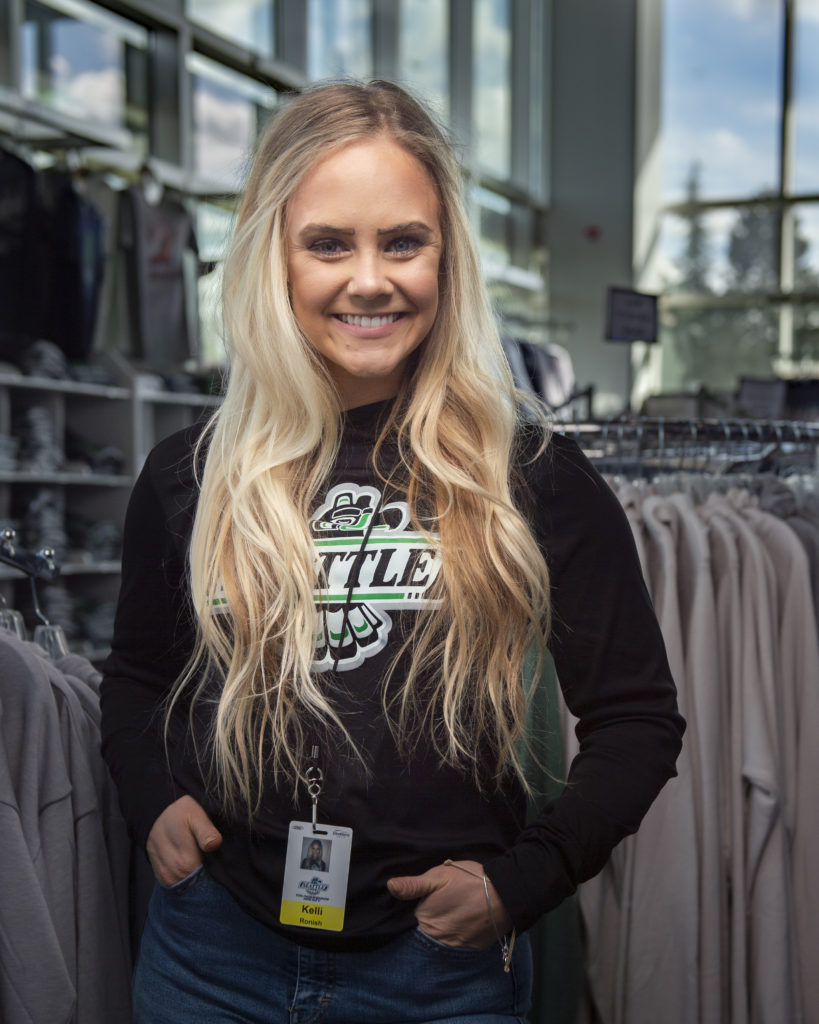 Monday-Friday I work in the T-Bird team store part time! And during game nights I sell Chuck-a-Pucks, which are the 2nd intermission entertainment. They are basically squishy pucks that people throw at a car parked on ice. They are a staple at each game and a total fan favorite might I add.

A solid 15 or 16 years. I am not kidding! I was 5-years old (in kindergarten) when I started selling Chuck-a-Pucks at the KeyArena (of course with adult supervision!). My dad started working for the organization right when he was done with college, so my family was lucky enough to help out and become involved. Chuck-a-Puck just caught on and we’ve been doing it ever since!

Geez it is so hard to pick just one! I seriously love every aspect of T-Bird hockey. Besides the fact that I get to work/watch 34+ hockey games each year, I think one of the best things about T-Bird hockey for me is the fact that it has developed into a family function. Pretty much every game night entails the whole Ronish-clan and I am super grateful for that. Not many people get the opportunity to be around their parents, aunt/uncle, grandparents, siblings and cousins pretty much every weekend. T-Bird hockey has kept my whole entire family tied together and allowed us to experience things we will be able to talk about the rest of our lives!

I love what I do so much for the ‘Birds that it is hard to find a “challenging aspect.” As cliché as it sounds, I think the most challenging part for me is when the season ends. I work every home game from October to April(ish) and you just can’t help but get super invested and passionate. So, whenever the season ends, it is always a hard pill to swallow. You go from interacting with fans/staff pretty much every weekend and then all of a sudden it comes to an end which is always makes me sad.

I have too many to choose from! But hands down my favorite memory would be the 2015/2016 and 2016/2017 seasons. Going to the WHL Finals two years in a row is something I will never forget. In 2017 when the ‘Birds beat Regina to become the WHL champs is something I will tell my kids about! Every home game throughout the playoff run was electric!

I don’t have any pre-game superstitions, but I do have a ritual! Before every game I am lucky enough to have the same fans come and buy Chuck-a-Pucks from me and we always chat for a bit! If my regulars don’t come see me before puck drop something just doesn’t feel right.

All I can say is it is about time! I am seriously so excited for NHL to come to Seattle! Our city is more than ready to have a professional team- just look at the rowdy atmosphere at T-Bird games.

In my free time I really enjoy going to the gym and/or hot yoga- it is a total stress reliever for me. In addition to that, pretty much anything revolving around sports- especially Husky football!

Everett. Something about sharing the Western half of the state creates some serious hostility. Portland is a close second but losing to Everett is very painful and does not sit well with me lol.