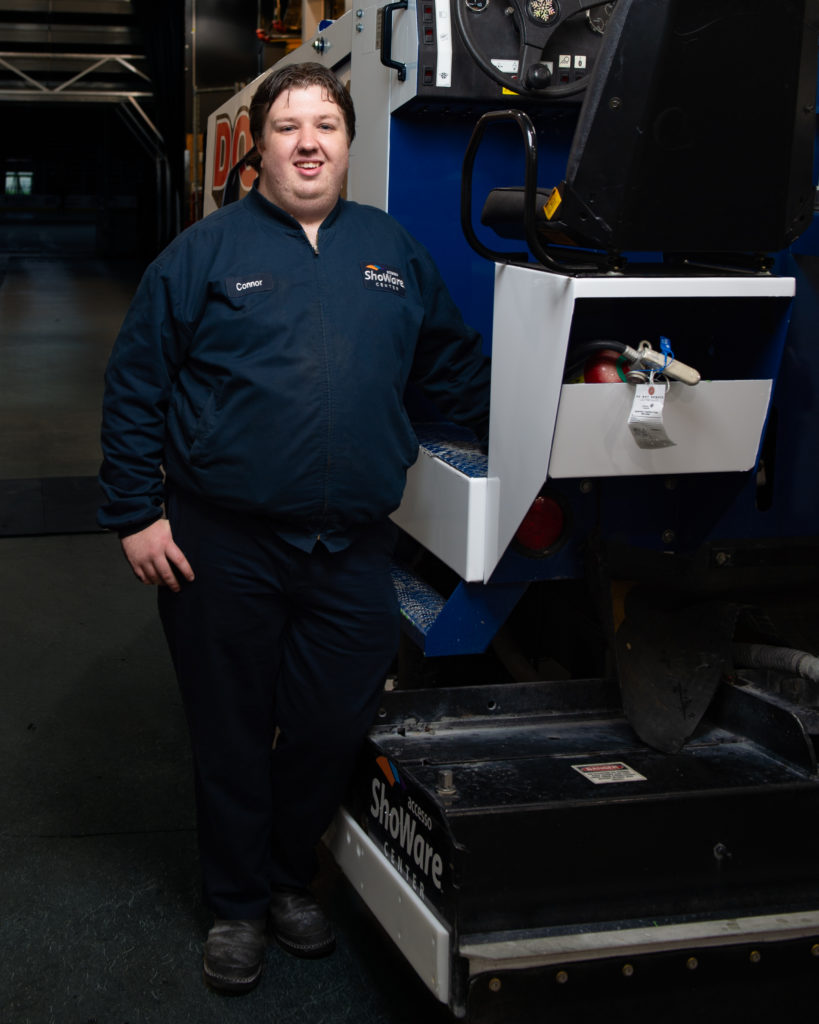 Team photographer Brian Liesse is introducing T-Birds fans to those connected to the team whose contributions might not be readily visible. We are excited about this project because we get to highlight those that make T-Bird hockey possible through their hard work and dedication to the team and the sport of hockey. We look forward to introducing you to T-Birds staff, accesso ShoWare Center staff, Booster Club members, Game Night Staff, Media, and others who help us celebrate and promote the team and the sport in the Pacific Northwest. Each person highlighted has answered a questionnaire about what they do with the team and some personal highlights. Brian took the photos of each person in their T-Bird environment.

The biggest thing that I do for the Seattle Thunderbirds is make the ice for them. I am in charge of making sure they have the best ice day in and day out. So, that means I get to drive the Zamboni pretty much every day.

This will be my fifth full season working next to the Seattle Thunderbirds.

My favorite aspect of what I do is getting to watch the talent grow through the years. I get to talk to a lot of the players through their career and watching them on the ice everyday improve themselves and get to the NHL level is probably my favorite part.

For me the most challenging aspect would be when a piece of acrylic pops off of the wall. It never falls out the same way. So, each time is a new challenge. I know all of the fans as well as the players are depending on me to put the piece in and the pressure is on me to figure it out as fast as possible. Trying to make a fast decision with around 4,000 people watching would I think be the most challenging aspect of what I have to deal with.

Definitely driving in the Championship series and winning the cup. I put a lot of hours into the building especially the hockey side of things. So, getting to watch a team all season and getting caught up in all the emotions, it was awesome. I remember driving the final game that season and looking at the score board saying one more with a huge smile on my face, then we won it in Regina. I was able to hoist it when the cup came back and it was the greatest feeling knowing that I got to make the ice that a championship team won on.  That was definitely the greatest memory.

I actually do. I never step on the logos or lines on game days. I started doing that the year we won the cup, so I have never done it since then. For some reason that has always stuck with me and I continue to do it to this day.

I am. As a kid I always grew up hoping to see an NHL game in person. I still have yet to actually see an NHL game, so hopefully I will be able to watch one finally. For myself, since I started working in the ice industry, I have watched hockey explode here. So, for a team to come to Seattle and have the next generation of hockey players be able to watch that and see what it takes to get to that level, I think it will help build hockey here even more as well as put Seattle on the map for being a hockey town, which in my opinion is the way it should be.

There are a lot of things that I love to do outside of work. One of my favorite things is playing hockey with my brother. He was actually the one that got me on skates for the first time. We don’t get to really see each other a lot, so every once in a while, I will get to go play hockey with him and we get to hang out and catch up on our days. For my summer I love to get out and hike around Mount Rainer. I love being outside when I can because most of my time is spent in doors.

I love to play left wing. I love that side of the ice. I play the best there.

For me personally it is Everett. Portland is a big one, but when my brother and I were young we didn’t like the same teams because of sibling rivalry. So, he became an Everett fan and ever since then I have put Everett on the biggest rivalry because of that. If the ‘Birds lose to Everett I have to hear it for a while. So, for me those are huge games.

My Instagram is the main social media I use. I post a lot of game day pictures on there so some of the fans that have followed me get to see what I do daily inside and outside of work. My Instagram is @serveprozamdriver.