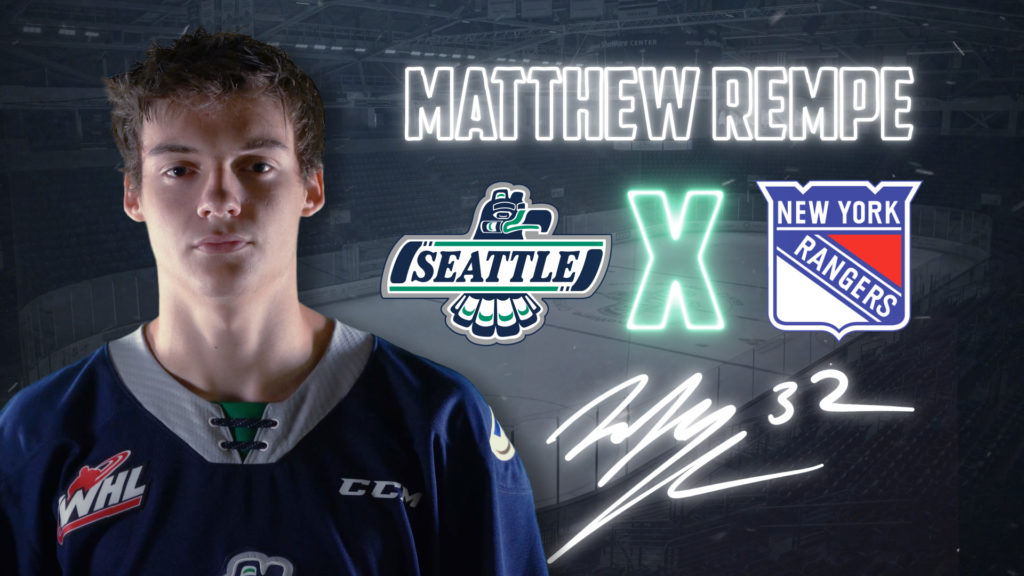 Center selected by Rangers in sixth round of 2020 NHL Draft

KENT, November 3, 2021 — The Seattle Thunderbirds have announced that center Matthew Rempe has signed a three-year entry level contract with the New York Rangers.

Rempe was selected by the Rangers in the sixth round, 165th overall, in the 2020 NHL Draft.

In three seasons with the T-Birds, Rempe has played in 65 games and has 17 goals and 23 assists for 40 points.

“We are very excited for Matt and his family,” says general manager Bil La Forge. “Matt is an example of a player that was not selected in the WHL Prospects Draft, continued to persevere and play his way onto the NHL radar. The best part about Matt is that he knows the work he began with us at 15, with the Spruce Grove Saints at 16 and in Seattle since, is just the beginning. He has a very bright future going forward. I would also like to congratulate our coaches and the skill development of our skills coach, Steven Goertzen, on their work with Matthew. The Rangers have locked up a very good player and an even better person!”

T-Birds season and single game tickets for the 2021-22 regular season are currently on sale. Tickets can be purchased by calling the T-Birds office at 253-239-7825.