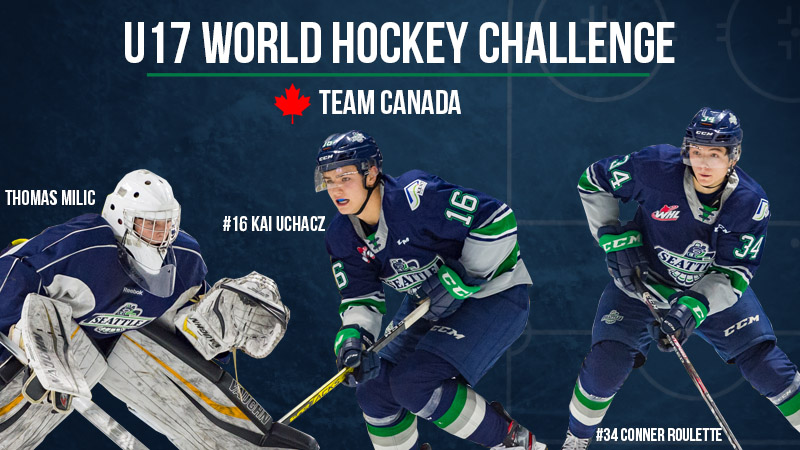 The 2019 World Under-17 Hockey Challenge takes place from November 2 to November 9 in Medicine Hat, Alberta, and Swift Current, Saskatchewan. Eight national teams will compete over the seven-day tournament. Team Canada Black, Team Canada White, the Czech Republic and United States will play in Group A. Team Canada Red, Finland, Russia and Sweden will comprise Group B.

“We are very proud of all three for their selection by Hockey Canada. We are confident they will represent the Thunderbirds and Canada very well on the international stage,” said La Forge.

“Their selections are a credit to the hard work of our scouting staff, led by Cal (Filson) and Mark (Romas),” continued La Forge.

Uchacz was selected by the T-Birds in the first round, 10th overall, in the 2018 Bantam Draft. This season Uchacz has played five games and has two assists. He scored his first goal as a T-Bird on March 13, 2019, in a 6-5 win over Portland.

Roulette was selected by the T-Birds in the second round, 34th overall, in the 2018 Bantam Draft. Roulette has appeared in seven games this season and has four goals. He had his first career hat trick in a 5-3 win over Victoria on October 5.

Milic was selected by the T-Birds in the third round, 51st overall, in the 2018 Bantam Draft. This season Milic is playing for the Burnaby Winter Club Prep team in the CSSHL. In five games he has a 1.21 goals against average and a .957 save percentage.