Kukuca Has Hat Trick But T-Birds Fall To Tigers 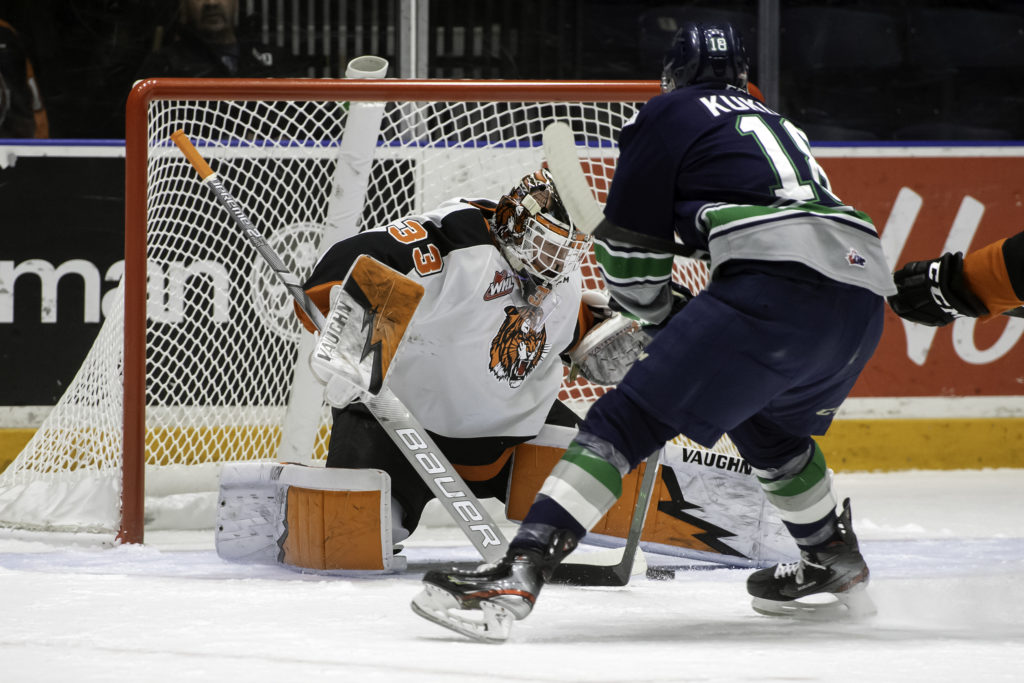 This was the second of three games in the Central Division for the T-Birds. They beat the Lethbridge Hurricanes 5-4 in overtime Friday and play Swift Current Broncos on Sunday at 2pm.

The T-Birds have a 14-20-2-1 record for 31 points which ties them with the Tri-City Americans for the second wild card playoff spot in the Western Conference. Tri-City has a 13-17-4-1 record and has played two less games than the T-Birds.

Kukuca tied the game 2-2 with two goals 22 seconds apart. Kukuca got the puck all alone in front of Medicine Hat goalie Garin Bjorklund and went forehand backhand roofing the puck over the goalie’s blocker at 15:32.

On the ensuing shift Conner Bruggen-Cate skated up ice on a two-on-one with Kukuca. Bruggen-Cate crossed the puck on his backhand from the right circle to Kukuca in the slot. Kukuca slid the puck under Bjorklund at 15:55 of the first. Kukuca’s 13th goal of the season tied Keltie Jeri-Leon for the team lead in goals. Matthew Rempe had the second assist.

Medicine Hat’s James Hamblin scored seven seconds after Kukuca’s second goal to give them a 3-2 lead.

Roulette tied the game 3-3 at 18:03 of the first. Jeri-Leon took a shot from the high slot that rebounded off Bjorklund to the right of the net. Henrik Rybinski got the puck and sent it behind the net to Roulette. Roulette brought the puck out at the left post and banked a shot off the defenseman’s skate and past Bjorklund.

Rybinski got the T-Birds a 4-3 lead at 2:21 of the second period converting on a two-on-one break. Roulette passed the puck up to Jeri-Leon to create a two-on-one. Jeri-Leon crossed the puck from the right circle to Rybinski in slot. Rybinski one-timed the pass and beat Bjorklund high for his 10th goal of the season.

Medicine Hat tied the game 4-4 on a power-play goal by Dylan Plouffe at 7:15 of the second.

Kemp scored at 12:42 of the second with the teams playing four-on-four to give the Tigers a 5-4 lead.

Hamblin scored a shorthanded goal 12 seconds into the third period to give the Tigers a 6-4 lead.

Plouffe scored at 11:30 of the third to get the Tigers seventh goal.