Kubicek Puts Down Rebels In Shootout 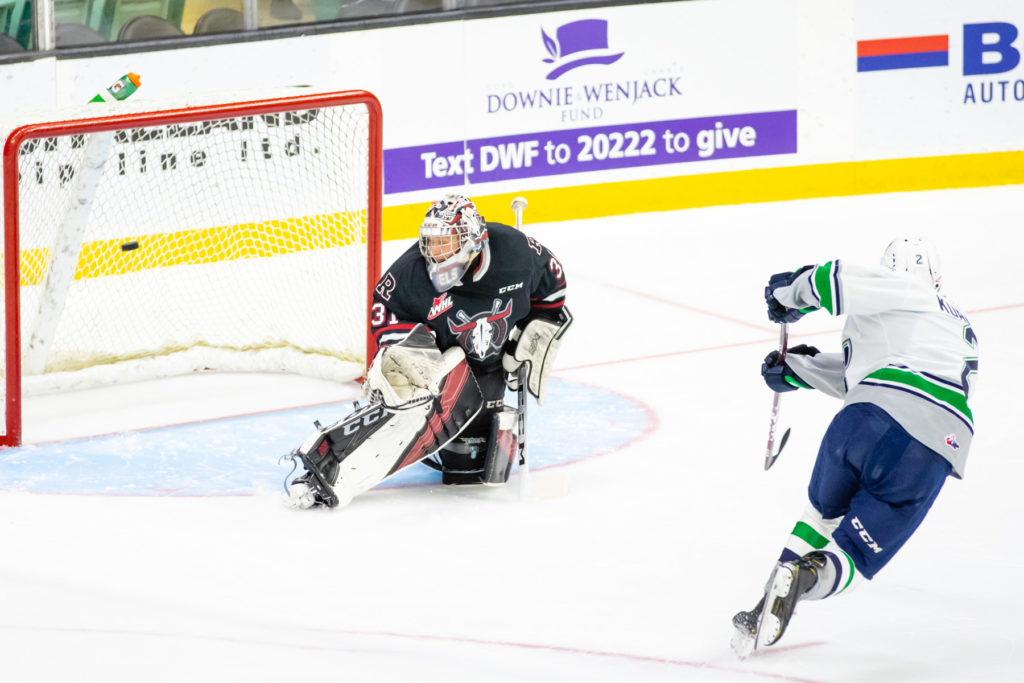 RED DEER, AB, October 25, 2019 — Simon Kubicek scored the game-winning goal in a shootout Friday night at Westerner Park Centrium to give the Seattle Thunderbirds a 5-4 shootout win over the Red Deer Rebels.

This was the first of three games in the Central Division. The T-Birds second game in Alberta is Saturday against the Edmonton Oil Kings at 6pm at Rogers Place. They face the Calgary Hitmen on Monday at 5pm.

Andrej Kukuca and Matthew Wedman were the T-Birds first two shooters and they were both stopped by Red Deer goalie Ethan Anders.

Kubicek was the third Seattle shooter. He came down on Anders and beat the goalie over the glove with a quick snapshot.

Ross need to stop Zak Smith to secure the win for the T-Birds. Smith tried to go five hole on his attempt but Ross got the pads down and made the save.

The T-Birds came off the bench and mobbed Ross after he made the game-winning save.

Seattle (4-4-2-1) answered back 1:25 after Red Deer’s first goal to tie the game 1-1. Wedman had the puck behind the Rebels’ goal and passed it to Henrik Rybinski in the low slot. Rybinski got off a shot that rebounded off Anders and into the crease. Jared Davidson banged the puck into the net as Anders tried to get over and make the save.

During the first intermission on the T-Birds radio broadcast on 1090 KJR play-by-play voice Thom Beuning interviewed former T-Birds captain Dustin Johner. Johner was the T-Birds captain for three seasons from 2001 to 2004. Johner retired after last season after a 16-year professional career. He lives in Sylvan Lake, Alberta, which is near Red Deer, and was seeing his first T-Birds game since he last played with the team in 2004. Listen to Thom’s interview with Dustin.

The Rebels went in front 2-1 on a power-play goal by Cameron Sedoff at 1:26 of the second period.

Ryan Gottfried set up the T-Birds tying goal with 20 seconds left in the second period. Wedman kept the puck in the offensive zone at the right point and then crossed the puck to Gottfried as he entered the zone. Gottfried had his head up as he skated into the left circle and took a wrist shot. Kukuca was stationed to the right of Anders and he redirected the puck past the goalie’s outstretched left leg.

Seattle scored two goals in 1:21 in the third period to take a 4-2 lead

Luke Bateman made it a 3-2 lead at 5:17. Bateman gathered a loose puck in the neutral zone and stickhandled through the Red Deer defense and beat Anders over the glove for his first career WHL goal.

Rybinski doubled the T-Birds lead to 4-2 at 6:38 of the third. Matthew Wedman forced a turnover behind the Red Deer net. Wedman centered the puck to Rybinski on top of the crease and he chipped it over Anders blocker.

The T-Birds next home game is Friday, November 8, against the Kamloops Blazers at accesso ShoWare Center at 7:35pm.