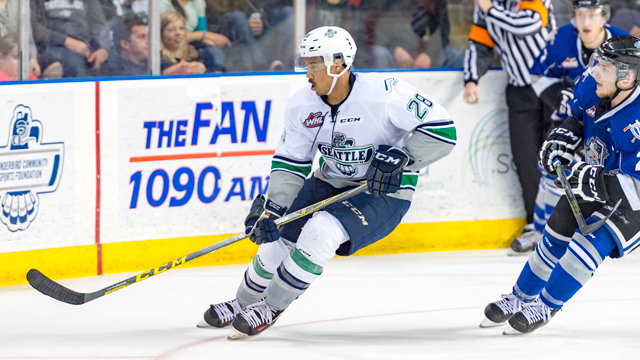 KENT, February 14, 2016 — Keegan Kolesar had a hat trick Sunday night to lead the Seattle Thunderbirds to a 4-2 win over the Victoria Royals at ShoWare Center.

The Royals entered the game on an 11-game win streak and had a 2-1 lead more than seven minutes into the third period before the T-Birds struck for three goals.

The hat trick was Kolesar’s second of the season. He had three goals against the Brandon Wheat Kings in a 7-2 win at ShoWare Center on October 27. Kolesar has 30 goals this season.

Seattle opened the scoring at 7:06 of the first period. Kolesar skated the puck down the right wing on a two-on-two with Nick Holowko. From the right circle Kolesar crossed the puck to Holowko. The pass hit a Victoria defenseman’s stick and went over Victoria goalie Coleman Vollrath’s right shoulder for the goal.

The Royals took a 2-1 lead at 1:33 of the second period on a goal from Dante Hannoun. Chaz Reddekopp and Scott Walford had the assists.

Victoria led 25-17 in shots after two periods by outshooting the T-Birds 15-7 in the second period.

The T-Birds took the lead 3-2 at 14:12 of the third on the power play. Mathew Barzal passed the puck to Ethan Bear inside the blue line at center ice. Bear put a slap shot on goal that beat Vollrath high for his 13th goal of the season. Ryan Gropp had the second assist on the go-ahead goal.

Kolesar iced the game at 18:33 of the third with an unassisted empty-net goal. Kolesar forced a turnover inside the Seattle blue line, got the loose puck and skated up ice. Kolesar had one defenseman in front of him as he entered the Victoria zone. He fired wrist shot past the defenseman for his 30th goal of the season.