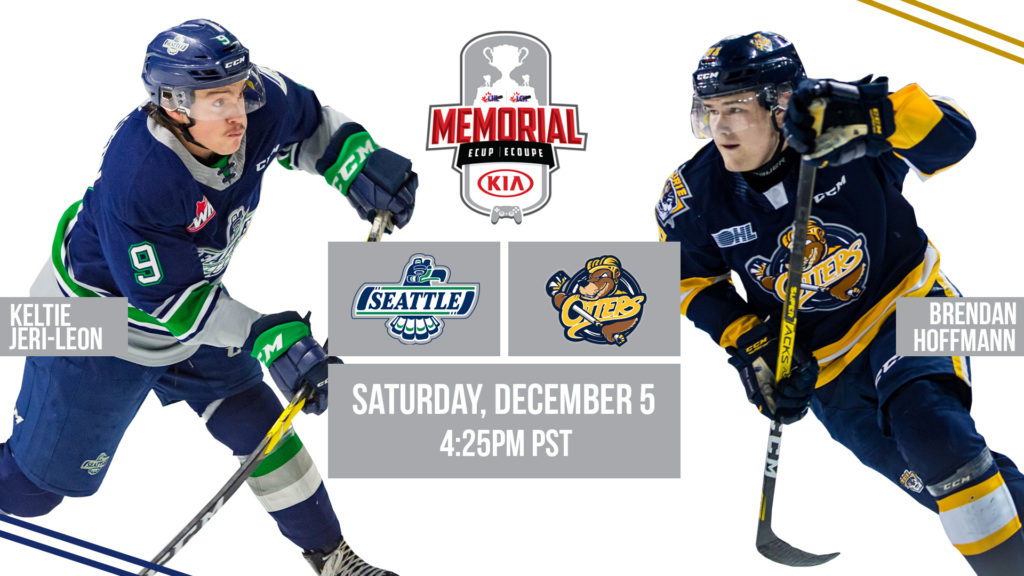 Keltie Jeri-Leon will represent the T-Birds in the Memorial eCup presented by Kia.

The interactive eSports tournament will feature one player representative from all 60 CHL Member Clubs plus four distinguished hockey personalities serving as guest participants displaying their gaming abilities and competitive spirit in NHL 21 on Sony PlayStation 4 with all matches streamed on Facebook Live and Twitch. Hockey fans and gamers are also encouraged to follow along at CHL.ca/MemorialeCup and across social media via #KiaCHLeCup.

The competition commences as a single-elimination tournament, with semifinal and final-round action then seeing players go head-to-head in a best-of-three format. Tournament play begins November 28 with a 10-game set while the ultimate champion will be crowned December 17.

Jeri-Leon will play Brendan Hoffmann from the Erie Otters in the first round of the Memorial eCup. The first-round game will be played on December 5 at 4:25pm and will be streamed live on the T-Birds Twitch Channel and Facebook Live.

The four notable guests who will participate in the premiere Memorial eCup presented by Kia:

Sam Cosentino is a renowned junior hockey analyst and NHL Draft expert. Attending Michigan’s Spring Arbor University on a baseball scholarship, Cosentino later shifted to broadcasting as a commentator with the Canadian Baseball League, play-by-play with the Montreal Expos, and later as Toronto Blue Jays field reporter with Sportsnet. Cosentino’s entrance to the hockey world began as an OHL color commentator while today he is best known as a broadcaster covering the CHL in addition to the American Hockey League and National Hockey League. In 2010, Cosentino achieved international acclaim in broadcasting the women’s hockey gold medal game at the Winter Olympics. As part of the CHL on Sportsnet team, Cosentino works alongside commentating partner R.J. Broadhead to provide invaluable insight into the CHL and its host of marquee national events.

Andy Mailly-Pressoir is a multi-platform reporter whose decorated career began as an editor alongside the 2011 launch of TVA Sports. A journalism graduate and self-described sports fanatic, Mailly-Pressoir later joined the Ça Begin Bien morning show as a sports columnist before later becoming co-host of the weekday program Les Infos à V Télé alongside Lisa-Marie Blais. In 2015, Mailly-Pressoir played a key role in helping Team Haiti capture gold in the B Division of the International Street and Ball Hockey Federation’s Ball Hockey World Championship. A dedicated community representative, Mailly-Pressoir helped raise funds for Montreal’s Maison d’Haiti, a community and cultural organization devoted to education and integration of new Canadians. Mailly-Pressoir is also an ambassador for Cystic Fibrosis Quebec, a provincial organization dedicated to raising awareness, fund research, and supporting high-quality care of cystic fibrosis.

Erin Ambrose is a Canadian gold medalist whose hockey resume counts two first-place finishes at the IIHF World Women’s U18 Championships (2010, 2012) and a silver-medal win in 2011. Later competing at the IIHF World Women’s Championship, Ambrose won silver in 2017 and bronze in 2019. A 2014 national champion with the Clarkson Golden Knights, Ambrose graduated in the class of 2016. Skating with Les Canadiennes de Montreal of the Canadian Women’s Hockey League during the 2018-19 campaign, Ambrose recorded 24 points in 26 games, earning her Defender of the Year honors. Earlier this year, Ambrose finished as the runner-up in Sportsnet’s EA Sports NHL 20 Bracket Challenge. A native of Keswick, Ont., Ambrose is currently a member of the Canadian Women’s National Team and continues to train with the Professional Women’s Hockey Players Association.

The puck drops for the Memorial eCup presented by Kia on November 28 with a 10-game set beginning with Justin O’Donnell of the Sarnia Sting facing off against Michael Milne of the Winnipeg ICE. Beginning as a 64-team showdown, the opening round features 32 contests over eight days. Further scheduling information will be revealed following the completion of the first round of play.

All games of the Memorial eCup presented by Kia will be streamed via Facebook Live and Twitch. Fans are also invited to follow along at CHL.ca/MemorialeCup and via #KiaCHLeCup. Additionally, a promo code will be provided during each game, giving fans a chance to win a $100 PlayStation® Store [CAN] or Xbox [CAN] gift card as well as e-copies of © 2020 Electronic Arts Inc. NHL 21. All contest entries will also be automatically entered into a grand prize draw for a chance to win a $1,000 prepaid Vanilla VISA® gift card!

Crowned December 17, the ultimate winner of the Memorial eCup presented by Kia will be celebrated with a $1,000 donation made to the winner’s charity of choice.