Smith To Play For University of British Columbia Next Season 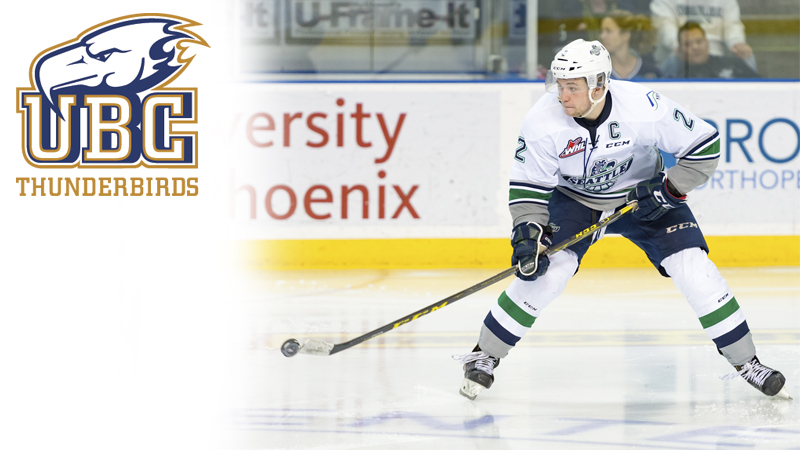 Smith played 281 games for Seattle in four seasons. Over the course of those four seasons, Smith tallied 24 goals and 94 assists for 118 points.  Smith served as the Thunderbirds’ captain for the 2015-16 season.

In 39 playoff games, Smith had three goals and 12 assists for 15 points. With Smith as the captain, the Thunderbirds won the WHL’s U.S. Division in 2015-16 before winning the Western Conference Championship and advancing to the WHL Final.

In the summer of 2015, Smith took part in the New York Rangers’ Development Camp.

Smith finished up his junior eligibility last season and will now take advantage of the WHL Scholarship Program. The Scholarship Program will provide Smith a year of tuition and books at the University of British Columbia for every season played in the WHL.

For each season played in the WHL, a player is awarded with a one year post-secondary scholarship, which includes tuition, compulsory fees, and required textbooks. A player is able to attend any career enhancing institution of his choice, including universities, colleges, technical institutes, trade schools, or any other institution which will help the player achieve his academic and career goals.

The WHL is the leading supplier of scholarships in Western Canada, and offers the most comprehensive scholarship in North America.

The T-Birds open the 2016-17 season in Portland against the Winterhawks on Saturday, September 24, at 7pm at the Moda Center.

The T-Birds single game tickets for the 2016-17 regular season will go on sale Wednesday, August 31, at 10am online on the T-Birds website and at the ShoWare Center box office.