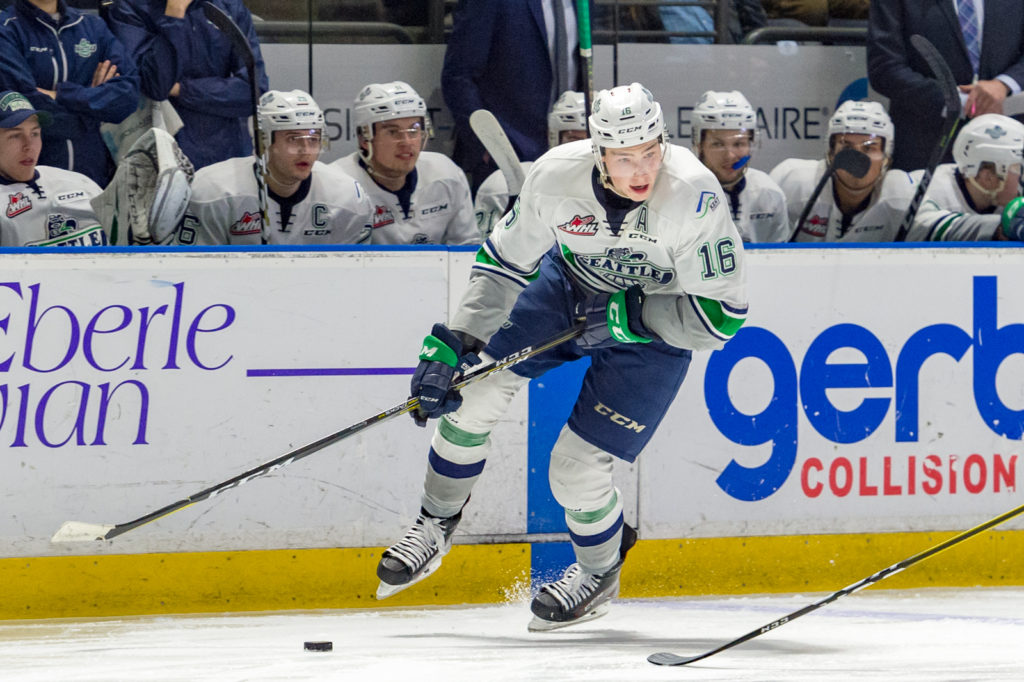 Philp, Tyszka and Volcan score in 4-3 loss to Lethbridge

The T-Birds travel to Portland to play the Winterhawks on Saturday at 6:05pm in a game that is being televised on JOEtv in Seattle. JOEtv can be seen on Channel 22/Cable 110. Seattle hosts the Kamloops Blazers on Sunday at 5:05pm at acesso ShoWare Center.

Seattle (17-22-4-1) went in front 1-0 at 7:01 of the first period. Sean Richards forced a turnover along the right boards in the offensive zone. Richards passed the puck back to Henrik Rybinski. Rybinski found Noah Philp in the slot and he beat Lethbridge goalie Carl Tetachuk over the glove for his 18th goal of the season.

The Hurricanes outshot the T-Birds 13-8 in the first period.

Jarret Tyszka put the T-Birds back in front at 8:55 of the second period on the power play. Philp crossed the puck from the right circle to Andrej Kukuca in the left circle. Kukuca centered the puck to Jarret Tyszka at center ice inside the blue line. Tyszka beat Tetachuk with a slap shot over the glove for his fifth goal of the season.

Lethbridge tied the game 2-2 at 14:24 of the second on a goal by Scott Mahovlich. Jackson Shepard had the only assist.

The line of Nolan Volcan, Matthew Wedman and Keltie Jeri-Leon had a hard working shift to put the T-Birds in front 3-2 at 15:58 of the second. Wedman won a puck battle along the left boards, and falling down, got the puck to Jeri-Leon at the hash mark. Jeri-Leon came off the wall but was tripped up and from his knees poked the puck to Volcan in the slot. Volcan ripped a hard wrist shot and beat Tetachuk over the glove.

Lethbridge outshot Seattle 17-16 in the second period and led 30-24 in shots after two periods.

Cozens tied the game 3-3 when he scored at 4:08 of the third period off assists from Calen Addison and Taylor Ross.

Lethbridge went in front 4-3 at 4:59 of the third on a goal from Jake Leschyshyn.

After the media timeout of the third Tetachuk stopped Jeri-Leon in close and then Tyler Carpendale rang a wrist shot off the right post.

Seattle pulled goalie Roddy Ross with 1:31 left in the third for an extra attacker. The T-Birds pressed in the last minute of the game for the tying goal with Richards just missing and Tetachuk making several saves.