Hitmen Slide by Thunderbirds in OT 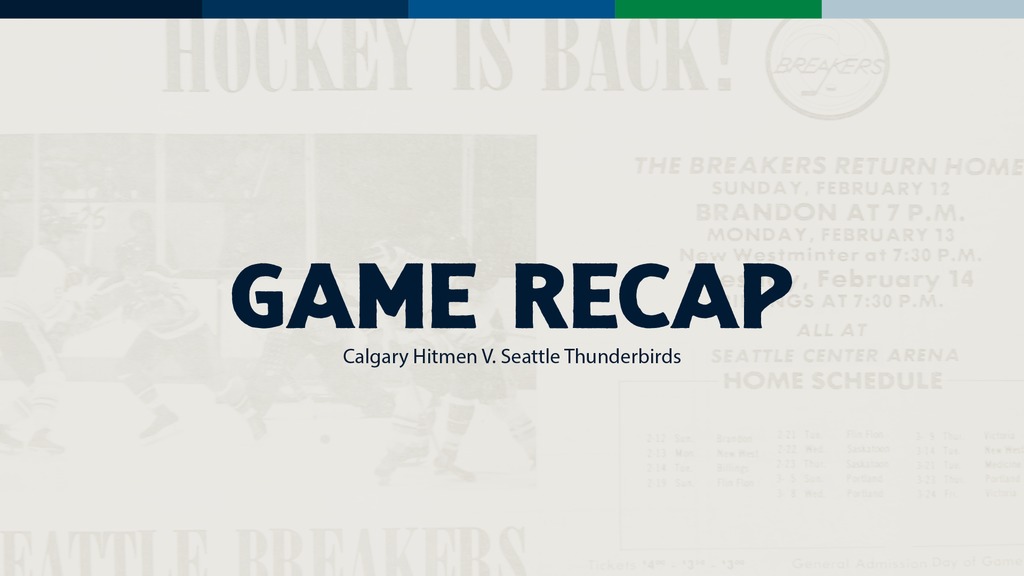 KENT, Wash. – The Seattle Thunderbirds were scoreless on eight power play opportunities and dropped a, 2-1, overtime decision to the Calgary Hitmen Saturday at the accesso ShoWare Center. It was the first time this season Seattle lost a game beyond regulation. The Thunderbirds four game homestand continues next Saturday when they host the Everett Silvertips.

Thunderbirds head coach Matt was frustrated with the result, but not the effort. “I think when you look at a game like this, our effort, it was there.” He says the team played to their identity, especially considering they played the night before in Spokane after a Wednesday game up in Kamloops. Meanwhile Calgary hadn’t played in eight days.

“Not an easy schedule for us this week. What we were looking for was playing to that T-Bird identity, emptying the tank tonight, and we did that.”

The week of travel may have led to a sluggish start for the Thunderbirds (12-3-1-0) as they mustered only four shots on goal in the opening period and surrendered a breakaway goal to Calgary’s Sean Tschigerl. But Seattle found their legs and came out and controlled the second period, outshooting the Hitmen 15-2.

“We aren’t happy with the result,” said O’Dette. “But we can live with it when we play as hard as we did.”

One of the obstacles for the Thunderbirds was Calgary goalie Brayden Peters who entered the game with the second best save percentage and third best goals against average in the league.  Seattle finally solved him when Luke Prokop scored at 8:07 of the third period. Jared Davidson and Lucas Ciona earned the assists.

“He played well. You tip your cap to him.” Said O’Dette. “Our guy played well too. It was a good goaltending duel tonight.” O’Dette said Seattle had their chances. “If we get a bounce or if one of those shots that’s off a post, crossbar, goes in it’s a different story, but here we are.”

Calgary got the winner at 1:57 of overtime on an unassisted wrap around goal from Oliver Tulk.

The Thunderbirds did finish the busy week by earning five of a possible six points playing three games in four nights.

With his assist on the Thunderbirds lone goal Jared Davidson stretched his point streak to ten games.

In their last five games Seattle is just 3 for 31 with the man advantage.

Coster Dunn, who was injured last Friday in Portland, was out of the lineup for a fourth straight game. Gabe Ludwig also missed the game with an injury suffered late in Friday’s game against Spokane.

Tij Iginla earned a silver medal at the U-17 World Hockey Challenge skating with Team Canada Red. They lost the gold medal game to Team USA, 11-3.