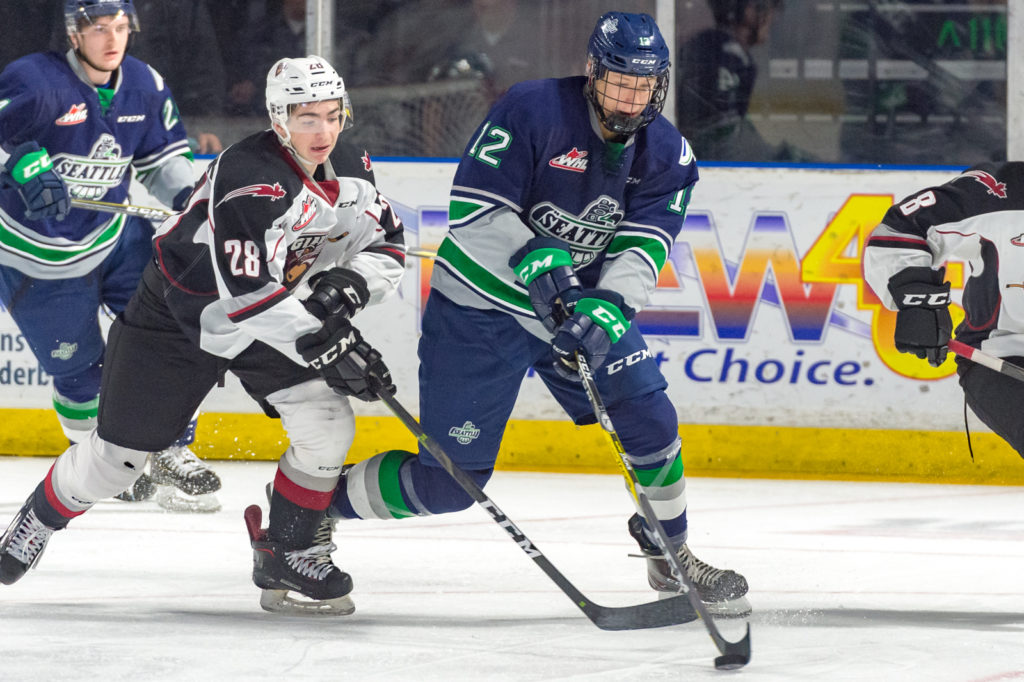 Volcan and Andrusiak score in 4-2 loss to Vancouver

The T-Birds next game is Friday at accesso ShoWare Center at 7:35pm against the Calgary Hitmen. They travel to Portland to face the Winterhawks on Saturday at 6:05pm in a game that is being broadcast on JOEtv. JOEtv can be seen on Channel 22/Cable 110.

Lucas Ciona made his T-Birds debut in the game. Ciona was the T-Birds second round pick, 32nd overall, in the 2018 Bantam Draft. This season Ciona is playing for the Northern Alberta X-treme Prep team in the CSSHL. He has six goals and eight assists for 14 points in 16 games. Last season he had 15 goals and 35 assists for 48 points in 30 games with the Northern Alberta Bantam Prep team in the CSSBHL. Ciona signed a WHL Standard Player Agreement with the team on August 24.

The Giants extended the lead to 2-0 at 14:28 of the first on a goal from Plouffe. Lucas Svejkovsky had the only assist.

Milos Roman scored a power-play goal at 3:51 of the second period to make it a 3-0 Vancouver lead. Koch and Roman had the assists.

Seattle (8-10-3-0) cut the Vancouver lead to two goals at 14:37 of the second on a shorthanded goal by Nolan Volcan. Volcan got a loose puck in the neutral zone and skated into the Giants zone on the left wing. Volcan took a hard wrist shot from the right circle that beat Vancouver goalie Trent Miner low on the stick side.

The Giants had a 30-17 advantage in shots after two periods by outshooting the T-Birds 17-10 in the second period.

Svejkovsky scored at 14:13 of the third period on an assist from Owen Hardy to make it a 4-1 Vancouver lead.

Zack Andrusiak cut the Giants lead back to two goals when he scored a power-play goal at 17:03 of the third. Owen Williams took a slap shot that came off the end boards and Tyler Carpendale tipped it to Andrusiak in the low left circle. Andrusiak beat Miner with a quick snap shot for his 11th goal of the year.

The T-Birds got a power play just after they scored and pulled goalie Liam Hughes for an extra attacker. They got several good chance but were not able to get the puck past Miner.