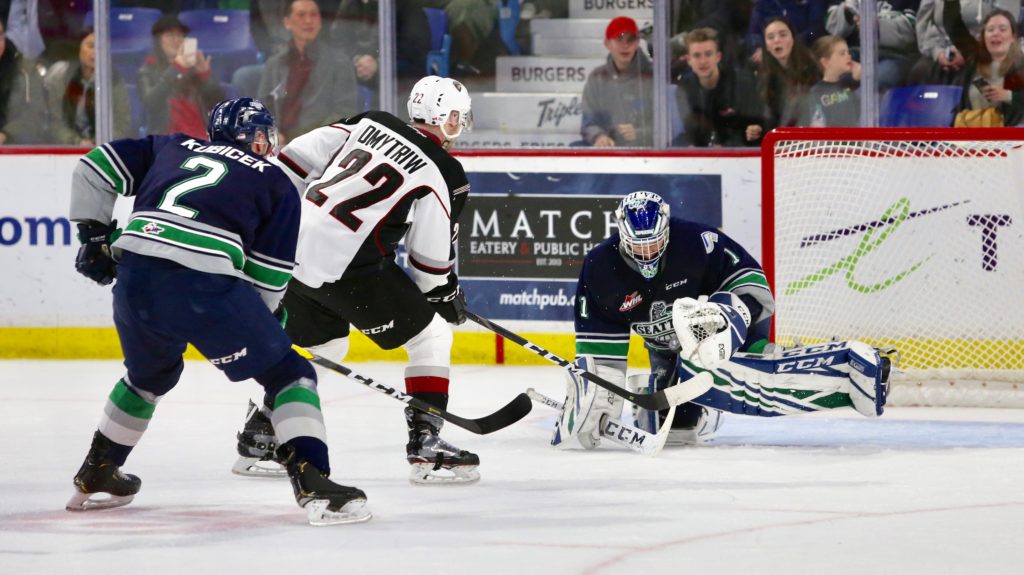 VANCOUVER, March 29, 2019 — The Vancouver Giants defeated the Seattle Thunderbirds 3-2 Friday night at the Langley Events Centre in Game 5 of a first round playoff series between the teams.

Seattle needs to win Game 6 to force a Game 7 on Tuesday, April 2, in Vancouver.

Vancouver took a 1-0 lead at 7:06 of the first period on a goal by Dylan Plouffe.

The Giants went in front 2-0 at 12:58 of the first when Jadon Joseph scored on the power play.

Seattle cut the Giants lead to one on the power play at 14:14 of the first. Andrej Kukuca took a shot from the left circle that was blocked. Matthew Wedman fired the loose puck at Vancouver goalie Trent Miner and it was deflected behind the net. Henrik Rybinski got the puck and centered it to Wedman on top of the crease. Wedman put the puck past Miner for his third goal of the playoffs.

Noah Philp tied the game 2-2 at 3:57 of the second period on the power play. Andrej Kukuca blocked a Vancouver clearing with his upper body to keep the puck in the offensive zone. Kukuca skated to his right and then centered to Jarret Tyszka at the mid-point. Tyszka passed the puck to Philp in the left circle and he one-timed the puck past Miner on the glove side.

Vancouver took a 3-2 lead at 4:43 of the third period on a goal from Dallas Hines.

Ross finished with 30 saves and Miner had 25 saves.