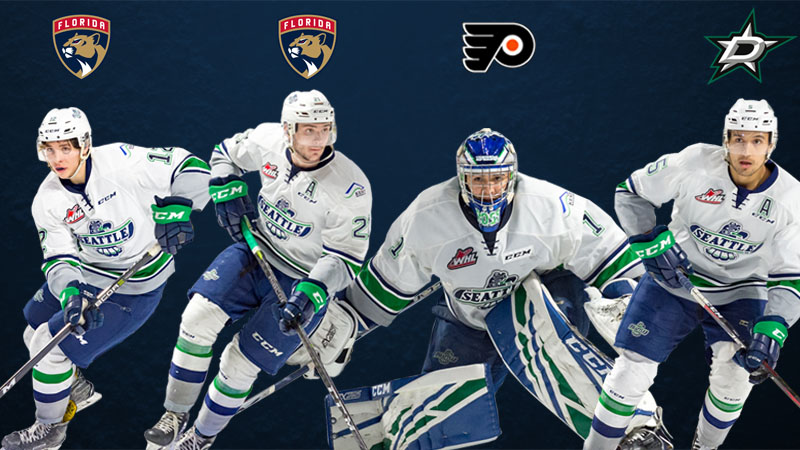 Right wing Henrik Rybinski is attending the Florida Panthers Development Camp at Panthers Ice Den in Coral Springs, Florida, from June 27 to June 30. Rybinski was selected by the Panthers in the fifth round, 136th overall, in the 2019 NHL Draft.

Rybinski played 33 regular season games with the T-Birds last season and had seven goals and 28 assist for 35 points. Rybinski was acquired from the Medicine Hat Tigers in a trade on January 4, 2019. In 47 games combined with the T-Birds and Tigers he had eight goals and 32 assists for 40 points.

Goalie Roddy Ross is attending the Philadelphia Flyers Development Camp at Virtua Center Flyers Skate Zone in Voorhees, Pennsylvania, from June 25 to June 29. Ross was selected by the Flyers in the sixth round, 169th overall, in the 2019 NHL Draft.

Back on the clock and we’ve chosen goaltender Roddy Ross with the 169th pick in the #NHLDraft! pic.twitter.com/PwkHgQ1JVm

Center Matthew Wedman is attending the Panthers Development Camp in Coral Springs. Wedman was selected by the Panthers in the seventh round, 199th overall, in the 2019 NHL Draft.

Defenseman Jarret Tyszka is attending the Dallas Stars Development Camp at Comerica Center in Frisco, Texas from June 24 to June 28.

Tyszka is attending the Camp as a Free Agent invite. Last season he had eight goals and 22 assists for 30 points in 41 games. Tyszka has played 213 games with the T-Birds and has 25 goals and 76 assists for 101 points.

Former T-Bird Noah Philp has been invited to the Development Camp of the Winnipeg Jets at the Bell MTS Iceplex from June 24 to June 28.