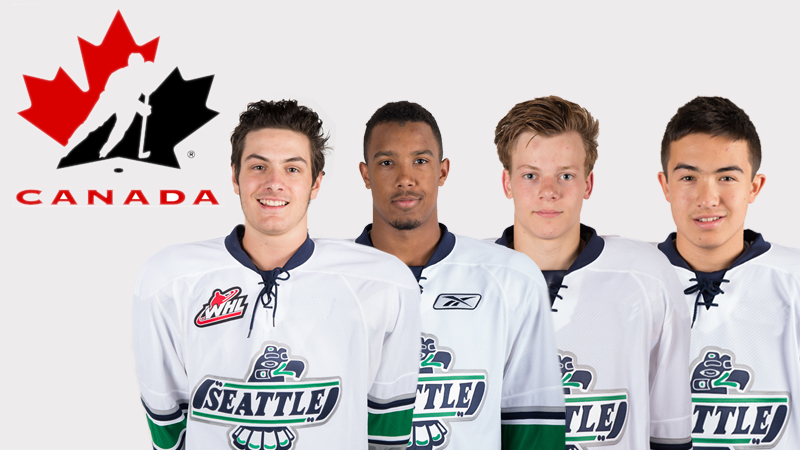 KENT, June 20, 2016 — The Seattle Thunderbirds, in conjunction with Hockey Canada, are pleased to announce four T-Birds have been invited to attend Hockey Canada Summer Development Camps.

Center Mathew Barzal and right wing Keegan Kolesar have been invited to Canada’s National Junior Team Sport Chek Summer Development Camp in Toronto. This camp takes place July 30 to August 2 in Toronto and will feature a four-game series against the United States, Sweden and Finland. Barzal and Kolesar are two of 41 players invited to the development camp that will help determine Canada’s 22-player roster for the 2017 World Junior Championships which take place December 26, 2016, to January 5, 2017, in Toronto and Montreal.

Center Elijah Brown and goalie Carl Stankowski have been invited to Canada’s National Under-17 Development Camp. This camp takes place July 26 to August 2 at the Markin MacPhail Centre in Calgary. Brown and Stankowski are two of 111 players invited to the Development Camp. Following the development camp players will be evaluated through the early part of the 2016-17 season. Hockey Canada will select 66 players for one of three national teams – Team Canada Black, Team Canada Red and Team Canada White – that will play at the 2016 World Under-17 Challenge from October 30 to November 5 in Sault Ste. Marie, Ontario.

Barzal had 27 goals and 61 assists for 88 points last season. Barzal had five goals and 21 assists for 26 points in 18 playoffs games last year. In 161 regular season games, over three seasons with the T-Birds Barzal has 53 goals and 146 assists for 199 points. Barzal signed an entry level contract with the New York Islanders on September 9, 2015. He played five preseason games with the Islanders and had one goal and one assist. Barzal represented Canada at the 2016 World Junior Championship. He had two goals and one assist in five games for Canada. His 61 assists made him the first T-Birds to pass 60 assists since Patrick Marleau had 74 assists in the 1996-97 season.

Kolesar played 64 regular season games last year and had 30 goals and 31 assists for 61 points. In 16 playoff games Kolesar had seven goals and eight assists for 15 points. In three seasons with the T-Birds Kolesar has played 189 games and has 51 goals and 56 assists for 107 points. Kolesar signed a three-year-entry level contract with the Columbus Blue Jackets on December 20, 2015.

Brown was the T-Birds first round selection, 15th overall, in the 2015 Bantam Draft. This past season Brown played 32 games for the Southside Athletic Club Midget AAA team in Edmonton and had 15 goals and 28 assists for 43 points. Brown signed a Standard WHL Player Agreement with the T-Birds on June 22, 2015.

Stankowski was a second round selection, 37th overall, in the 2015 Bantam Draft. Stankowski played for the Anaheim Jr. Ducks U16 team this past season. He had a 1.87 goals against average and a .935 save percentage in 16 games with the Ducks. His record was 11- 4 with two shutouts. Stankowski signed a Standard WHL Player Agreement with the T-Birds on May 12.