mathew barzal NHL Rookie of the Year
by
Ian Henry 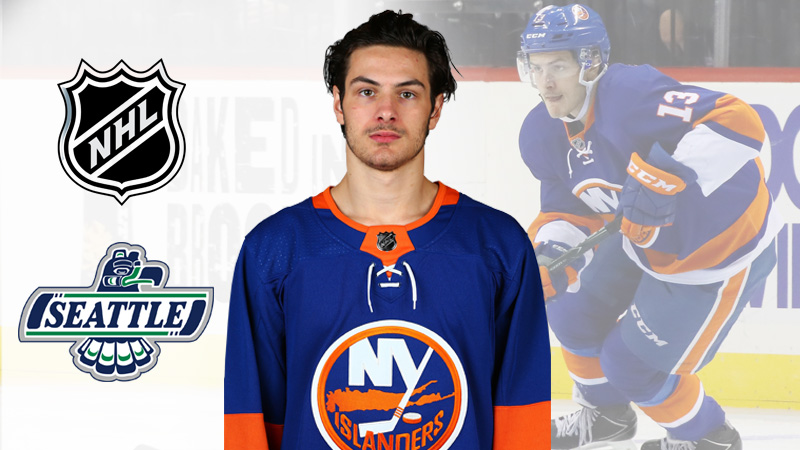 Barzal registered 22 goals and 63 assists for 85 points in 82 games in his rookie season with the New York Islanders. Barzal was selected by the Islanders in the first round, 16th overall, in the 2015 NHL Draft.

Barzal is first in T-Birds history in career playoff points with 17 goals and 48 assists for 65 points in 49 games. He was the WHL Playoff MVP as the T-Birds won the 2017 WHL Championship.

“It is exciting to see Mat be presented with the Rookie of the Year Award. He always had a burning desire to be a hockey player and his desire carried him through the entire season. He played every game, played his own style, and contributed offensively from day one and each of those is hard for a rookie to do so he is very deserving of this award.” – Russ Farwell, T-Birds Vice President of Hockey Operations.

“Everyone knows that Mat is a talented player, but it is his competitiveness that puts him over the top. He wants to win at everything he does, whether it’s a playoff game, a training camp scrimmage or a video game with his teammates on the bus. His desire to win has been a big factor in his success.” – Matt O’Dette, T-Birds head coach.

“Mathew was obviously a very talented player and when we won the lottery and had the opportunity to select him first overall in the WHL Bantam Draft the decision was easy. What we soon learned was how driven to succeed he was. Considering the huge pressure and expectations he would face, he accepted the challenge and delivered. This is a very special quality that has taken Mathew’s talent to another level. That’s what makes Mathew so special, he is relentless to succeed, and it was a big part of the culture necessary to win a championship.” – Colin Alexander, former T-Birds Director of Player Personnel and current amateur scout with the Pittsburgh Penguins.

“I was fortunate to get an opportunity to coach an elite talent that also possessed the drive to do whatever it took to be the best player in the game. Mat was a great leader for our teams in Seattle. His talent and willingness to do what it takes was a huge factor in winning the WHL Championship.” – Steve Konowalchuk, former T-Birds head coach and current assistant coach with the Anaheim Ducks.

“Barzal’s ability to control the tempo of play was evident from early on. His speed and allusiveness were incredibly difficult to defend. He drew so much attention to himself, that opponents would get caught watching him dangle as he found a seam to create scoring chances for his teammates. Truly a gifted player.” – Mark Romas, T-Birds Director Scouting.

“Every time he stepped on the ice with Seattle I think we expected good things to happen and Barzy rarely disappointed. He was under a microscope but he thrived under the pressure of being the face of a franchise. But as good as Mat was here with the T-Birds you could recognize this past season, with the Islanders, that he’s taken his skills to another level now that he’s in the NHL.” – Thom Beuning, T-Birds radio play-by-play voice.

The entire T-Birds organization joins with our fans in congratulating Mathew on winning the NHL Rookie of the Year Award. It’s a great accomplishment.