Eight is Enough for T-Birds 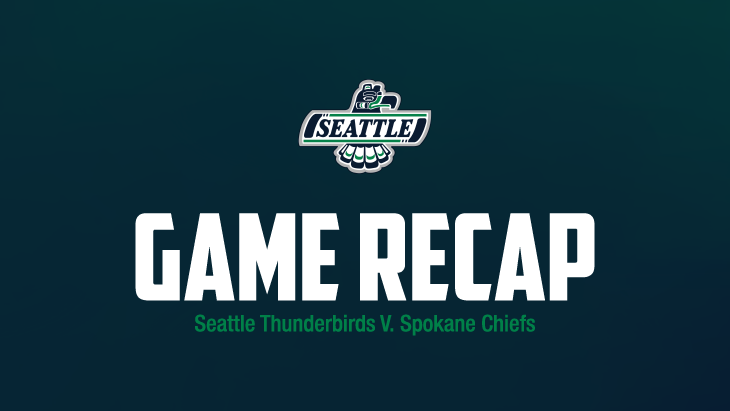 Kent, WA. – Henrik Rybinski’s four-point night (2g, 2a) propelled the Seattle Thunderbirds past the Spokane Chiefs Tuesday night, 8-2, at the accesso ShoWare Center. The eight goals were a season high for the Thunderbirds who have scored 15-goals in their last two home games. The two teams meet again this Friday when they travel east to match up again at the Spokane Arena.  Game time is 7:05 p.m.

Because Covid is still affecting the locker room, Seattle (22-10-4-0) dressed just sixteen skaters, two under the limit. Despite that, they were still able to drive the play, outshooting the Chiefs 41-22.  Head Coach Matt O’Dette said playing with the lead helps when you’re shorthanded. “It’s important. We talk about game management all the time and getting the first goal is part of that.”

The T-Birds got the first goal at 5:35 of the first period when Rybinski scored the first of his two on the night, assisted by Sam Knazko and Sam Popowich. O’Dette credited his team for getting off to a fast start, especially after a sub optimal performance in their last game, a loss down in Portland. “We were anxious to get that sour taste out of our mouth. Saturday was not our best effort and we wanted to rectify that.”

The T-Birds extended their lead early in period two when Rybinski set up Conner Roulette for his 14th of the season.  Chase Lacombe had the second assist.  Spokane got on the board at 5:15 thanks to Chase Bertholet.  The teams then combined for three goals in 60-seconds.  Mekai Sanders scored the eventual game winner for Seattle, shorthanded and unassisted, at 10:35. Reid Schaefer followed 24-seconds later with his 15th of the season as Rybinski picked up his second assist. Then, at 11:35, Saige Weinstein potted his first for Spokane.   Seattle closed out the scoring in the second period when Lucas Ciona banged home his 8th with 12-seconds remaining.

The third period was all Seattle.  After killing off a Chiefs power play, Rybinksi netted his second of the night at 3:02 to make it 6-2 T-Birds.  Jordan Gustafson got in on the scoring at 7:20, set up by Kevin Korchinski.  Korchinski was one of just five defensemen available for the T-Birds and he logged plenty of ice time as a result. “I think we just had to stick to our game,” he said. “We gotta play smarter. We have to have short shifts and we just had to step up as an entire D-unit.”

O’Dette gave his young defenseman high marks for his performance. “He just controls the flow of the game, making some really elite plays out there. He controls the game when he’s out there. Great game by Korch tonight.”

The Gustafson goal sent Spokane goalie Mason Beaupit to the bench, replaced by Manny Panghli, but the T-Birds were able to tack on one more when Jared Davidson scored his team leading 16th while on the power play. At the other end, Seattle netminder Thomas Milic earned the win with a 20-save performance.

The T-Birds have a busy weekend ahead of them. In addition to the game in Spokane Friday, they host the Portland Winterhawks Saturday, then travel to Everett on Sunday.

Seattle has registered at least 40-shots on goal in four of their last five games.

This was Knazko’s last game with Seattle until after the Olympics.  He leaves later this week to play for Slovakia at the Winter Games in China next month.

This Saturday’s home game versus Portland is also Teddy Bear Toss Night to benefit the Forgotten Children’s Fund. Game time is 6:05 and tickets are still available at seattlethunderbirds.com