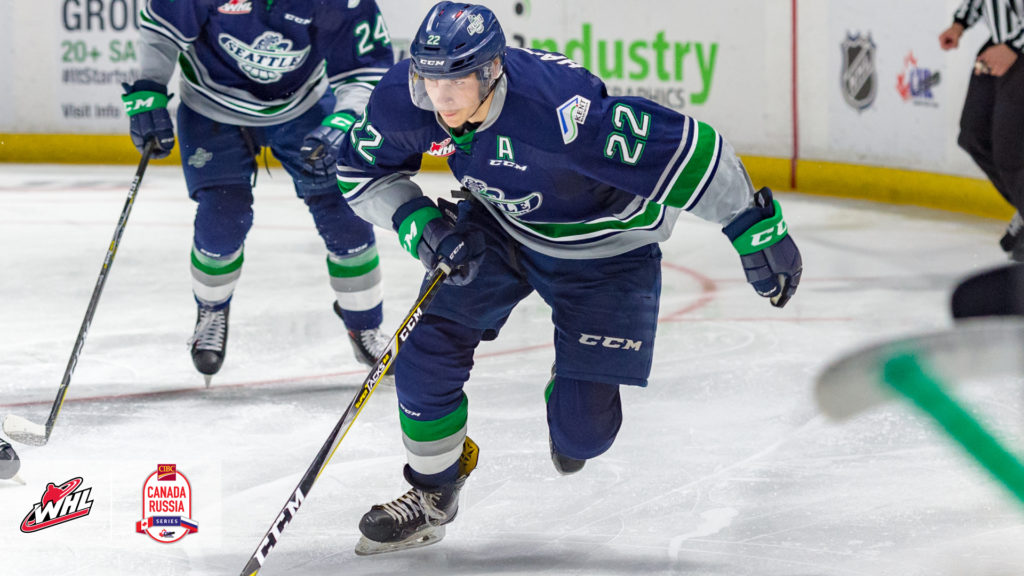 The 18-year-old Hamaliuk will replace Justin Almeida (Moose Jaw Warriors) who was injured in Team WHL’s 2-1 win over Russia in Game 1 of the 2018 CIBC Canada Russia Series Monday night in Kamloops. Hamaliuk will wear sweater No. 9.

A product of Leduc, Alta., Hamaliuk is eligible for the 2019 NHL Draft and was listed as a ‘C’ prospect on NHL Central Scouting’s preliminary ‘Players to Watch’ list.

With Hamaliuk’s addition to the roster, Team WHL will now be represented by five players eligible for the first time in the 2019 NHL Draft. He joins forwards Dylan Cozens (Lethbridge Hurricanes), Nolan Foote (Kelowna Rockets), Kirby Dach (Saskatoon Blades), and defenceman Bowen Byram (Vancouver Giants), who are all first-time eligible.

Almeida, a fifth-round pick (129th) of the Pittsburgh Penguins at the 2018 NHL Draft, was appearing at the CIBC Canada Russia Series for the first time in his career.

Team WHL will face Team Russia in Game 2 of the 2018 CIBC Canada Russia Series on Tuesday, November 6 at the Langley Events Centre in Vancouver.

Since the event first began in 2003, CHL teams have played to an overall record of 61-22-1-6. The competitiveness of the rivalry has grown in recent years, with the 2017 event requiring a shootout to break a series tie in Game 6. The first ever shootout finale in event history was won by Team QMJHL, giving the CHL its third consecutive series victory. Team CHL has won 12 times in event history, with Russia emerging victorious on three occasions.

The 2018 CIBC Canada Russia Series is supported by title sponsor CIBC, the Official Bank of the CHL, along with associate sponsors Kia Canada, Sherwin-Williams, Cooper Tires, and Kubota Canada.  All games will be broadcast nationally on Sportsnet and TVA Sports.