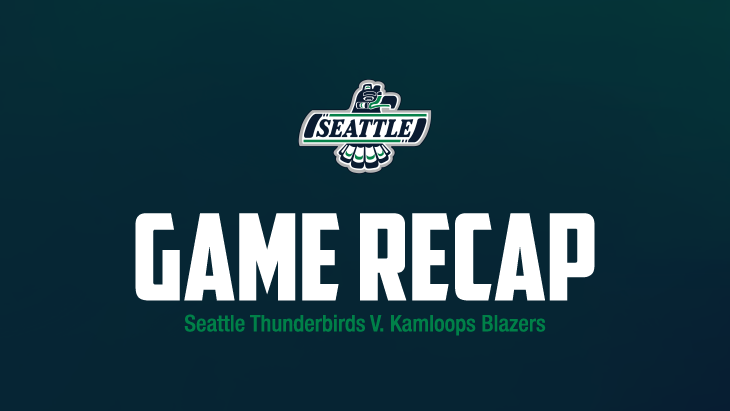 Kent, WA. – With just ten forwards available the Seattle Thunderbirds came up short Wednesday against the Kamloops Blazers at the accesso ShoWare Center, falling 4-1. The loss was the third in a row for the T-Birds. The Thunderbirds next action is this Saturday when they host the Tri-City Americans at 6:05 p.m.

The T-Birds were playing without their top two centers. Henrik Rybinski missed his third straight game with an upper body injury. Meanwhile, Matt Rempe was serving out a one game suspension after he was assessed a major boarding penalty late in the second period Sunday in Everett.

With two big guns out of the lineup, Seattle Head Coach Matt O’Dette says his available players gave the team a chance. “It’s a tough assignment, being down two of our centermen. That’s a very good team, obviously, and I thought we stuck with them and battled hard the whole way.”

Seattle’s league best penalty kill had to go to work early as the Thunderbirds were assessed two penalties in the game’s first three minutes. They were able to deny Kamloops both times. It gave the T-Birds a lift and they pushed for the first goal, only to be denied when a puck was cleared off the Blazer’s goal line with the game still scoreless.

Kamloops (15-2-0-0) finally broke on top with a pair of goals in the final five minutes of the opening period. Reese Belton struck first at the 15:00 mark of the period and just over two minutes later, Nick McCarry gave the Blazers their two-goal lead.

The Thunderbirds (11-6-1-0) were able to cut into the Kamloops lead at 4:46 of the second period on Jordan Gustafson’s ninth goal of the season, assisted by Conner Roulette and Eric Van Impe. Unfortunately, it would be the only goal Seattle would get on the night despite 36-shots on goal, including 14 in the third period.

O’Dette says there are lessons to be learned from these recent games. “Not getting the bounces is part of the adversity we’re going through, but this is the time of the season where some adversity can lead to growth. We can learn from these situations so that when we face some of them down the stretch, come playoff time, we’re a little bit more battle tested.”

The T-Birds were pushing for the tying goal through the first half of the third period, but a turnover in the defensive zone led to the Blazers pushing their lead back to two goals at 3-1 when Quinn Schmeimann scored at 8:19.  Kamloops would finish off the scoring with a Logan Stankoven empty netter at 18:13.

The game against Kamloops was the first of four in a row on home ice for the Thunderbirds. In addition to Saturday’s game against Tri-City, Seattle welcomes the Prince George Cougars to town next Tuesday at 7:05. The homestand concludes Friday December 3rd, at 7:05 p.m. against the Victoria Royals. Tickets for all Thunderbirds home games are available at seattlethunderbirds.com.

With the T-Birds shorthanded, Niko Tsakumis made his WHL regular season debut. Seattle selected the Richmond, B.C. native in the sixth round of the 2020 WHL Prospects Draft. The young defenseman did play in two preseason games for Seattle in September but did not register a point.

Two Thunderbirds, Scott Ratzlaff and Sam Oremba, are away from the team. They are both participating in the U17 Capital City Challenge. The tournament begins tomorrow in Ottawa and runs through December 1st.